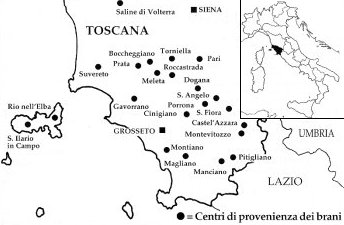 Yes, this really is the latest of Giuseppe Michele Gala's excellent Ethnica series - despite the fact that it's number 13 and the last one I reviewed was number 20 ... not everything goes to plan in the life of a record producer, as well I know!  This one is Volume 1 of the Tuscan Folk Dances series and focuses on the Maremma, the coastal plain to the south of Siena - roughly between the two headlands of Piombino in the north and S Stefano in the south, with the island of Elba lying just off its coast - as the map shows.

One of the cultural characteristics of the Maremma is a great diversity of types and styles of music, song and dance to be found there.  The reason for this is that mountain dwellers from the interior would bring their flocks down from the highlands in winter time to capitalise on the milder climate, pastures, coastal woodland for charcoal-making, etc, to be found there - bringing with them their own music.  My review of the Lomax Italian treasury on Abruzzo, reviewed here last year, includes some description of this transumanza in an area south and east of Toscana, from the herdsmen's perspective, and might prove to be of some interest here.

The main occasions for singing and dancing were the veglie of the CD's title - the evening get-togethers in relatives or neighbours' houses which occurred mainly at Epiphany, Carnival, May festivals and the grape and grain harvests, although there were a few ritual dances performed at the appropriate times as well. 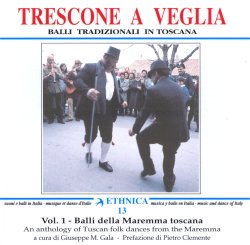 One almost inadvertently writes in the past tense when describing such things, but it has to be said that they still go on in isolated areas, and it was these events which Giuseppe Michele Gala found, recorded and now releases on his CDs.  The recordings here range from 1982 to 1998.

The dances range from the conventional European couple dances, schottisches, heel and toe, quadrilles and tarantellas through to more exotic local ones like the trescone - a pantomimic dance of a quite explicit sexual nature, whose name may be derived from the Etruscans who were noted for such dances in the times of ancient Rome.  Other local dances include La Veneziana and La Galletta, which are sung fixed-set dances, plus some unusual ones like the Ballo dei Gobbi (dance of the hunchbacks) associated with carnevale, the ballo del riccio (hegehog dance) and the ballo del'orso (bear dance) - ancient animal-inspired dances formerly common in other areas of Italy but now found only here.  There's also the very unusual ballo del chiamo e della sorte (dance of call and chance), a dancing song of medieval origin in which the 'dancing master' calls up the women one by one and pairs them off with the men.  It's said to have been known as far back as the 1300s.

A project like this one cries out for the video camera and DVD format - so we could see the dances as well as listen to the music ... but it's a technology which came too late for this, and many another, similar, situation.  As it is, the music is generally well sung, or played on accordions, whistles, fiddles, guitars - and even a mouth-organ and a tenor sax - and is well recorded like all the Taranta CDs.   But it does feel a little flat compared to some of the others - and having read about the fascinating dances, you do miss seeing them.