This is the fourth of the regional releases in the Treasury series - and the first to deal with a central Italian area.  Of course there were a few tracks from this part of the country on the Sampler, though only one of these was from Abruzzo. 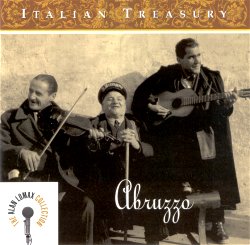 So this is the first volume to present a large, regionally cohesive block of song and music from central Italy - and the immediate impression is of how surprisingly Northern most of it sounds .  But as we well know, culture generally, and music particularly, are no respecters of political boundaries - so there is not the hard and fast demarcation between the North and the South which many Italians today like to pretend exists.

For readers unfamiliar with the geography, Abruzzo is the regione to the east of Lazio (and Rome), bounded by Marche in the north and Molise in the south.  It has a narrowish coastal strip along the Adriatic, but most of the land comprises the Apennine range - so it's pretty mountainous.  Indeed, the Gran Sasso - tallest of the Apennine group - affords a view of both the Adriatic and Tyrrhenian seas; right across the entire width of Italy.

This CD is one of the 'new' ones in the series - i.e. not a reissue of an earlier LP version - and so has the benefit of an entirely new booklet and a hefty 71˝ minutes running time, with all of the 25 tracks tagged as previously unreleased in their present (complete, I assume) form.  The booklet notes are extremely good - most particularly for the Historical Note from Ellen Harold, and that on the arie of Abruzzo by Adriana Gandolfi.  We learn that the few Adriatic ports had little economic significance and that the principal mainstay of the area has been livestock raising, supplemented by agriculture in the interior river basins.  For centuries the shepherds of Abruzzo engaged in a massive seasonal migration (transumanza); moving their flocks down into the tablelands of Apulia for the winter and returning to their own high pastures for the summer.

Several important characteristics of the musical traditions of the area stem from this fact.  Firstly, co-operative shepherding and farmwork have been features of the economy for centuries - transhumance is documented as far back as the 15th century.  Women left to run the farms alone for more than half the year whilst the men were away with their flocks on the 'great trail' obviously needed to co-operate with each other as well - and their economic importance was reflected by a higher social status than in other similar areas.  When they worked together with men in the fields, it was the women to took the lead in the work songs!  It also seems apparent that there was rather less of an instrumental tradition in the area, and that singing was of paramount importance.

Goffredo Plastino's Introduction and recording notes are somewhat less ethnomusicological in character than those of some earlier volumes, and include details of the 5 reels of tape Lomax filled in Abruzzo - noting that he recorded almost 70 items there.  He also points out that the visit lasted only five days and covered a limited area restricted to 5 towns in the province of L'Aquila.

The song or tune notes, by Domenico Di Virgilio, are excellent, and much fuller than on some previous volumes - at least as far as the songs or dances are concerned.  Sadly, and as usual, he is able to tell us nothing of the performers ... most are simply indicated as 'unidentified'.  Nor are any of Lomax's superb photos captioned.

The CD contains examples of peasant and shepherd songs, those of artisans, and folkloric songs of composed origin.  There are several ritual alms-seeking pieces, narrative ballads, funeral laments, a partenza (leave-taking song), serenades and love songs, work songs, and a couple of dance tunes.

In a way, this CD is quite untypical of the Series so far, in that there's hardly a single track which might be termed 'difficult' or 'challenging' and everything is pleasantly melodic and enjoyable.  The down-side to that is that some things are very slightly bland, and it wouldn't be hard to use this as background music next time you're throwing an Italian meal for friends or family.  Lest anyone mistake this for a recommendation, I should make it clear that I prefer music which demands my attention, and doesn't leave room for less-important stuff like eating or conversation!

However - I did say "some things", and there is one performer here whose two songs would make this CD a worthwhile purchase,

even if they were the only two tracks on the whole thing.  The man concerned is Giuseppe Gavita, who sings and plays fiddle at the same time, accompanied on guitar by Liborio Garanfa.  On track 7 he sings Scura maie - indicated as a funeral lament (sound clip).  The title is a shortening of the phrase scura m'hai lasciata (you have left me dark - or in black), and it's a woman's song which touches on the consequences of widowhood ... economic hardship, children asking for food, loss of the family home, the indifference of people at large.  The instrumental intro and inter-verse refrains are in strict tempo, which only serve to highlight the almost free-rhythm singing of the verses - this is truly wonderful stuff.

Giuseppe Gavita returns on track 13 with La partenza del pastore (The Shepherd's Farewell).  The Partenze were originally women's songs expressing a girl's sorrow at leaving the family home when she married, and were often called 'brides' songs'.  The form was adapted to suit the other great leave-taking situation in Abruzzo, that of the annual transumanza, and this is what we have here.  The song describes the preparations for the great trail,

gives instructions to the girlfriend or wife regarding farmwork to be done and food preparation, and details the singer's love for her - how he will keep her picture with him - and ends with goodbyes to her and all the family.  It is sung and played in similar style to Scura maie, but with completely free-rhythm singing in the verses, which is equally beautiful and even more arresting (sound clip).

The presence of these two tracks, plus the general quality of the rest of the music and the interesting booklet make this a 'must have' CD for anyone interested in Italian singing - and it's certainly the volume of those so far issued in the Treasury series which I'd most recommend to the general listener.  Excellent!