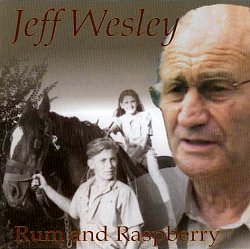 It's interesting that almost all I have to say about this CD I have already said about Bob Lewis's The Painful Plough, some three years ago.  Of course, this isn't really so surprising, since both men sing in a quiet, undemonstrative, measured way, without making much overt use of such ploys as melodic or rhythmic variation, yet still manage to hold your attention completely.  Both are also neither traditional nor revival singers, but fall into that category I have decided to call 'successors'.

Jeff has lived, where he was born, in Northamptonshire - and has farmed there all his working life ... indeed, he still has some stock on the family farm, now in the hands of his son.  It's an indication of how the world has changed that this should be a matter of remark today ... formerly it would have been quite normal!  He has also been involved in the revival for most of his life, and his repertoire reflects this interest - though he has also collected songs from neighbours and local farm workers.

He and the lovely Sylvia are now regularly to be encountered at the many singing weekends which seem to be flourishing in the partial vacuum left by the largely unlamented passing of the folk club.  For many years he was known as 'that chap who sings a whole verse without taking a breath'.  Whether it's a mark of advancing years, or of increasing maturity, I don't know, but he doesn't seem to do this any more ... and I'm pleased to find it so.  I always felt that it smoothed out his singing to such an extent that 'expression' - the natural flow of the words and their meaning - got a little lost along the way.  I think he's a far better, and more interesting, singer today.

Naturally, my comments about the songs presented here reflect my own interests and taste - other listeners will find different enthusiasms and reservations.  The CD starts well, with four nice songs - two of which come from New England.

My particular favourite is The Turtle Dove, a compilation 'put together over the years with verses from here and there'.  It's a lovely thing, and shows Jeff in top form (sound clip, left).  There then follows a series of songs which don't appeal to me very much, although they are split into two sections by a fine version of Apron Strings.  The selection then picks up again (in my opinion), and proceeds through six more enjoyable songs, to end in fine form with George Fradley's Last New Year's Day (sound clip, right).

This latter item brings me to my only real criticism of the CD.  It was recorded live before an invited audience, whose chorus singing sounds like it used to in the good old days of the '60s folk club.  However, in my opinion, Jeff's isn't the sort of singing which is particularly appropriate to that sort of chorus participation - I find it a rather uncomfortable combination.