Vic Smith's recent article on Bob Lewis made mention of a new CD of his songs soon being available - indeed, the latter part of the article is made up of Bob's comments on the songs from it.  So it's good to know that The Painful Plough is now available, and has been sent in for review. 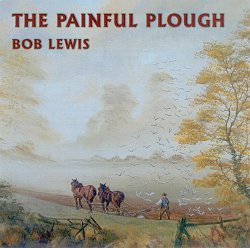 Although Bob has been around the folk scene for many years, his is not a name I've often seen in club guest lists - and this CD makes it clear why.  In many ways he's the antithesis of the folk club singer - quiet, undemonstrative, measured - indeed, he sings rather like the other Sussex Bob (Blake), with whom he has often been confused.  Regular readers will, I'm sure, realise that this introduction is not a denigration of the CD, but an indication that I like it enormously.  It passed the 'breakfast test' with flying colours, and left me with a bowl of soggy cereal!

It is, I think, a mark of Bob's skill as a singer that, without making any overt use of such ploys as melodic or rhythmic variation, he still manages to hold your attention completely throughout almost all the songs here.  The few exceptions being the humorous ones, where the words do that job anyway.  Mind you, this does make the reviewer's task rather difficult, as there isn't a great deal to comment on in his singing - other than to say that it works splendidly.  Fortunately, the wonders of technology allow you to hear a few examples of what I can't easily describe.

The songs, then.  One or two of the unfamiliar titles listed above actually resolve into more well-known ones:

A Trip to Southend is often called Never No More For Me, from the first line of its refrain (Bob Cann used to sing it, among several others, including George Belton - from whom this version comes); Spread the Green Branches is yet another version of Flora (Sound Clip, left), to take its rightful place alongside Sheepcrook and Black Dog - which for years seemed to be the only one anyone knew.

A Capital Ship is described in the notes as a parody; indeed it is, and of Blow Ye Winds I-O (Ten Thousand Miles Away) which Walter Pardon sings so well on MTCD305-6.  Here, it's acquired several delightful twists to its standard tune, and a bizarre set of words well worthy of Billy Bennett - here's a short sound clip.

There are, I think, three songs here which few, if any, readers will be familiar with.  The Cobbler is from Henry Burstow of Horsham, with additional verses from an old schoolbook Bob acquired

"full of fables and Greek mythology and all that, and there was a fuller version of the song in there".

Live All Alone was also sung by Burstow (and published in Broadwood's English Traditional Songs & Carols), but Bob's version comes from his mother (Sound Clip, left).  Neither of these songs appear to have been collected more than once.  The Ox Ploughing is a little less rare, but Roud has only nine singers listed; none outside the West Country.  Bob learned his version from friends in Cornwall (Sound Clip).

My personal favourites here tend to reflect my own song-type preferences rather than any qualitative assessment of the material or performances,

but I am specially fond of The Trees Are All Bare (Sound Clip, left), which George Townshend sang so well - although this is another of Bob's Mum's versions.  The Bold Fisherman has been widely collected and sung, but I do like the way Bob handles it here.

The one gripe I have about this CD is that the default 2-second inter-track break is nowhere nearly long enough for most of the songs sung here.  Often the gaps between verses are longer than that - so the first verse of a new song often seems like the next verse of the previous one, but to a different tune!

That aside, this is a delightful CD of a lovely singer.  How I wish there were more like it - proper English singing!  As a token of my regard I'm now making it easily available, price Ł12.00, from MT - see the MT Records website - click the Other CDs cataloge button.