Boney;  I am a Brisk Young Sailor;  From Spithead Roads;  Blow, Boys Blow;  Beautiful Nancy;  The Loss of The Ramillies;  Sally Brown;  Come, Come My Brave Boys;  Fair Maid of Bristol;  Our Ship She's Called The Convoy;  The Sailor's Bride;  A Long Time;  Greenland Whale Fishery;  Rio Grande;  Lovely on the Water;  Come Roll The Cotton Down;  From Sweet Dundee;  Ranzo;  The Margaret and The Mary;  Whisky For My Johnny;  Homeward Bound. 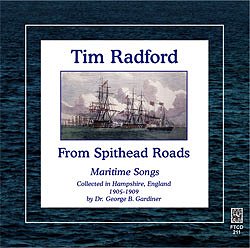 Back in 2009 I reviewed Tim Radford's first CD, George Blake's Legacy (Forest Tracks FTDC209), which I admired as a piece of research and production - and enjoyed listening to.  George Blake was a New Forest singer collected by George Gardiner in 1906-7, who happened to live near to the village where Tim was born, and the CD presented his complete repertoire.  This present CD is also completely dedicated to singers collected by Gardiner in Hampshire - though one must assume that these 21 songs are Tim's favourites, rather than the 'completist' selection on his first CD.

Another very important difference between the two CDs is that the first had a superb 52-page booklet, whilst this one has but the ubiquitous single-sheet folded insert.  It does give the provenance of all the songs - but that's about all.  However, on the Forest Tracks website you'll find a 20-page PDF file giving the full texts of all the songs, plus very extensive notes - well up to the George Blake's Legacy standard.  Although some of the song titles listed above may be very familiar to many readers, and the texts pretty much as you probably know them, I don't think there's more than two where the tune is exactly the same as the 'standard' version.  This is greatly to be welcomed.

And there are some interesting songs here; Hampshire is a maritime county and all the items presented may be considered sea songs.  I thought I had a pretty full repertoire of sea songs, but there are a lot here which are new to me.  I don't think I've ever even heard versions of I am a Brisk Young Sailor (Roud 1042), From Spithead Roads (Roud 17781), Lovely on the Water Roud 1539), Beautiful Nancy (Roud 18525), Fair Maid of Bristol (Roud 17811), [Bessie] The Sailor's Bride (Roud 13808), or The Margaret and The Mary (Roud 2464).  The text implies that this latter must an Irish song, with several mentions of Kerry and Shannon, yet Roud has only two examples, both collected in Hampshire by Gardiner.  It's a nice little six-verse story with an interesting tune, but it's rather spoiled for me by the 4-line fol-de-riddle chorus between each verse, which only serves to disrupt the narative line.

The splendid Come, Come My Brave Boys (Roud 17782) would also have been unknown to me, were it not for the fact that it's one of The Dollmopps' most recent discoveries (because it mentions the Isle of Wight!) - heard at Sidmouth this summer, possibly its first public outing.  A brief local note here: maybe Tim's stay in the States has dulled his memory of Hampshire custom, but he's added the word 'the' before Spithead in the third verse - "we have arriv-ed at the Spithead and we are at our ease".  In the same way that no Suffolk native would talk of The Blaxhall Ship, you'll not hear of The Spithead in Hampshire.  A couple of the other songs turn out to be more well-known songs by different titles: From Sweet Dundee (Roud 613) is Boston Harbour while Our Ship She's Called The Convoy (Roud 4706) is Rounding Cape Horn.

Another difference between Tim's CDs is that while George Blake's Legacy had occasional accompaniment by Jeff Davis (fiddle and mandocello) and Tim's wife Jan Elliott (concertina and recorders), this new one has John Roberts on anglo-concertina, and John together with Jacec Sulanowski and Tom Goux on vocal choruses on most of the songs.  Tim only sings unaccompanied on 6 of the 21 songs, so the whole record sounds rather different ... but it's still, very definitely, a 'folk revivalist' CD.  The sad fact that none of these songs were ever captured on a sound recording has meant that Tim has never actually heard any of them sung by a traditional singer, and thus he has not been able to absorb any of his source's stylistic nuances.  Nor has he added many of his own - the result is singing with little in the way of melodic or rhythmic variation or, sadly, much dramatic or emotional dynamism.  It seem that he has two 'voices' - a strong one for shanties and lively songs, and a soft one (at times almost 'crooning') for quieter ones - and that's what you get for the whole of that song.

So, while I applauded George Blake's Legacy for the depth of its research and presentation, I was able to forgive the rather uninspiring singing.  This one is equally well researched (though you have to go to the Forest Tracks' website to find the full notes), and has a substantial number of little-known songs on it - making it pretty unusual, and welcome, these days - but I still find it hard to overlook the singing.  Tim has a nice, tuneful voice but - as is so often the case - that's about all you get.  It seems a shame that he's gone to a great deal of trouble in finding these songs, and far less in finding how to sing them well.