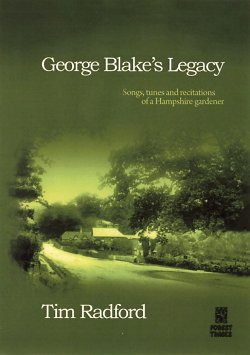 This really is a most unusual record - sung by an Englishman living in America, on an English label, of the complete (known) repertoire of a New Forest singer collected back in 1906-7 by George B Gardiner.  At first glance it seems an unlikely project, because it goes without saying that Tim Radford has never heard George Blake sing.

Tim was introduced to his native New Forest music and songs by the late Dave Williams back in the '70s, and became interested in George Blake's songs since they were geographically near neighbours - albeit separated by two generations in time.  Sorting through the Frank Purslow books, and then the Gardiner collection, he eventually learned the whole repertoire.  So what we have here is a labour of love - one man's tribute to another.  It amounts to 48 songs (though some are fragments), one recitation and four toasts.  Tim points out in his excellent and highly detailed 52-page MT-style booklet that it seems likely that a lost Gardiner notebook contained the full texts for some of 'fragmentary' songs, but instead of using other versions of these songs he has presented them as instrumental pieces (very well played by Jeff Davis and Tim's wife Jan Elliott) to make a varied listening experience of the full-length CD.

Readers with maths skills may have noticed that 48 songs, one recitation and four toasts don't easily fit into the 28 tracks listed above.  This is remedied by the inclusion, in the last 21 pages of the booklet, of a further 21 songs, including their words, staff-notation of their tunes, and notes on their provenance.  These 'extra' songs are:

As Tim says in the booklet, he chose to omit them from the recording because they are already fairly well known - but his decision to include them in the booklet is wholly admirable.  Inclusiveness at this level has to be warmly applauded.

There's no doubt at all that this is a very valuable contribution to the canon - most particularly its well-researched and detailed booklet, which gives us the fullest possible account of the man and his place in what was then a very isolated woodland community.  My congratulations to Tim for an excellent piece of work - and one I find particularly resonant, coming from the same part of Hampshire myself.

The CD is probably as good as is could be, given the circumstances of its creation.  Tim has a good, clear voice, and sings well in that warm, round Hampshire accent which betrays not a hint of his 12 year stay in the USA.  But he doesn't sound like a traditional singer - indeed, why should he?  But to encounter a whole CD's-worth of the repertoire of a countryman of the 19th century, sung in the voice of the 21st century's folk revival, can be just a little unsettling.  Further, since circumstances never allowed Tim to actually hear George Blake sing, he has not been able to absorb any of his source's stylistic nuances.  Nor has he added many of his own - or maybe he decided that it wasn't appropriate to do so here.  In any event, the result is singing with little in the way of melodic or rhythmic variation or, sadly, much dramatic or emotional dynamism.  A pity - perhaps a less reverential approach might have made the CD a more interesting listen, without diminishing its undoubted historical value.

The songs, as may be seen from the tracklisting above, are a very mixed bag - many are very well known, but there are also some interesting and rare items.  I Am a Sailor is a long broadside ballad, and certainly both interesting and rare; The Jolly Highwayman turns out to be an English version of the Valentine O'Hara that Frank Harte used to sing; and Maria turns out to be a very full version of Through the Groves, while Charles Dickson is actually Sally Monroe.

It's interesting, I think, that whenever (as here) the complete repertoire of a singer is revealed it comes as a surprise that one man should have had such a wide-ranging set of songs - implying the need for a broad selection of types of song in order to play a full part in the musical social life of his community.  This is in stark contrast to the narrow, mediated selection of 'folk' songs presented as the repertoire of many of our great traditional singers by commercial record companies towards the end of the last century.  I fully accept their need to produce profitable records - but they could have at least told us of the wider pool of songs from which they made their selections.