An anthology of music and song from Northumbria

This is the sixth of Mike Yates' Borders CDs; like the others, this one is primarily intended for the 'home market' - where there's still a deal of music to be found, and an interested audience.  Also like them, this is a CD of 'recently recorded' material - which might alert one to the possibility of aged performers, scarcely able to hold a tune or a rhythm, but things are happily a bit different up there than they are in much of the rest of England. 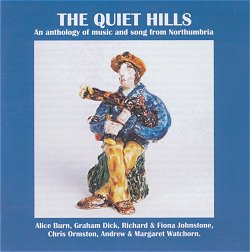 Most of the performers you'd be happy to pay to hear as guests at your local folk club - but already I'm misleading you; this is no folk club record.  It's a record, in the true sense of the word, of a community and its songs and music.

Primarily, it's a record of the music of Northumbria - pipes and fiddle dominate - but there's also a splendidly-told story (by Margaret Watchorn) and three songs from Graham Dick.

For me, the stars of the show are Andrew and Margaret Watchorn, who duet on pipes and fiddle (but I can't find anything in the notes to tell me who plays which), and who add to the enjoyment of well-played tunes with some excellent harmonies - which is not at all usual, in my experience, from this area.

There will be those amongst you who, like me, lament the effects of 'competitions' on the young musicians of the North East of England - which all to often seem to result in a player 'cramming all the notes in' regardless of the effect on the rhythm of the piece.  Alice Burn (who comes a close second to the Watchorns in my affections) was just 11 years of age when her three tracks were recorded, yet displays none of this unfortunate charcteristic.  Indeed, her playing is a delight - even in the technically difficult variations (based on Tom Clough's) on The Keel Row - and her own composition, Ford Moss, is a truly beautiful air, and extremely well played.  I'm sure we'll be hearing a good deal more of her in the future.

Chris Ormston, who has a Kyloe CD all to himself (see our review), makes only one appearance here; to provide an opening and closing tune to Margaret Watchorn's great story, Eilaf and the Cheese.  What delights me particularly is that this is a family story, which tells how the Dodds (she was once Margaret Dodd) acquired their name - and this seems to undeline my point about this being a record, in the true sense of the word, of a community.

Richard and Fiona Johnstone (pipes and keyboard) have only two tracks and, in the presence of all this light and open music, I find that the keyboard lays rather a dead hand on some otherwise perfectly good piping.  Graham Dick's three songs do not, I'm afraid, do a great deal for me - although there are some good comedy lines in Alwinton Show, writen 'many years ago' by Billy Bell of Redesdale.

As I said, a CD intended for the local audience - but I can't imagine many MT readers who wouldn't thoroughly enjoy most of it ...  whilst bemoaning the fact that they don't live in a community with an on-going oral tradition as strong as this one.  It should be available from Mike Yates's website at: www.kyloerecords.co.uk