Time Out of Mind

Kyloe Records is Mike Yates' new label devoted to distributing traditional music from Northumbria.  Travellers' Tales Vol 1 & 2, and Borderers have recently been reviewed here: the fourth release is the first solo album from one of the leading middle generation players of the Northumbrian small pipes, Chris Ormston. 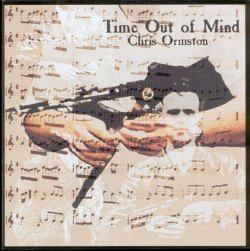 Although Chris has appeared on several other recordings, including Northumberland Rant, Spirit of the Border, (both reviewed in MT) and on the CD released by 'Border Directors' - the band in which he plays alongside Matt Seattle and others - he has not until now recorded a solo album.  Time Out of Mind is an hour long selection of tunes principally from the established repertoire (mostly 'trad arr', Gow, Clough, Pigg etc.), with a handful of his own compositions thrown in.

Chris is a superb player, both of his instruments and of the music.  Northumbrian pipes seem to be one of the instruments whose best exponents attract the soubriquet 'Virtuoso', and he is acknowledged as one of these.  He is the player 'who plays all the variations' - and this CD gives ample evidence of the quality of his musicianship.  Above all, he seriously and meticulously understands where his music is coming from, both in the wider context of his knowledge of piping traditions, and in the specific origins of his own style.  And that style is the Clough tradition.

To give an idea of this commitment, I lift here a contribution made by Chris himself to an Internet discussion about the 'four styles of traditional Northumbrian piping' (Clough/Armstrong/Pigg/Hutton) -

Firstly, piping styles have always been numerous, and I'm beginning to doubt if there was ever one agreed way to play.  The Clough family had their approach, yet they respected Richard Mowat who would take his whole right hand off the chanter to scratch his *****

They were also good pals with Anty Charlton, who, according to Forster Charlton, had a style like 'dripping tap'.  Tom Clough Jnr told me that Anty's hands were so fat that he couldn't manage a staccato style, while the Clough disciples only played fast to mask the dreadful tuning of their chanters.  Tom Clough Jnr also remarked that Billy Pigg was a lovely bloke, but wasn't rated as a piper!!!!!

Clough: Four, possibly five, generations were pipers.  Attracted pipers from far and near to come for tuition, advice, and inspiration.  Style/repertoire was passed through the family, and remained an unbroken tradition for at least 120 years.  If there were indeed five generations, this would take us back to the time of Robert Bewick, and possibly John Peacock.  They must have been doing something right!

How do I know this?  Analysis of the (admittedly limited) recorded material, comparison with Clough manuscripts, 22 years of trying to play it … And I asked a bloke by the name of Tom Clough Jnr.  The truth was out there.

A few days before his death, Clough Jnr told me “Me father would have liked you”.  Suddenly, it had all been worth it!  So forgive me if I give any Clough sceptics a cyberpunch on the nose and directions to the nearest melodeon shop.  You're not going to take it away from me.

Rather a long quote; but it gives both an outline of the essence of the Clough tradition,

and it shows unequivocally just where Chris Ormston is coming from.  So what of the CD?  Well, firstly it is an excellent demonstration of the Northumbrian piper's craft: the playing is crisp, accurate and expressive.  Here's a snippet of I Saw My Love Come Passing By Me, since this is one of the well-loved showpieces, and which is the opener here.  The Holey Ha'penny is here too, as is Memories (Clough), Keening in the Wind (Pigg), All Night I lay with Jockey and other well-loved tunes.  There's a spread of less familiar tunes interspersed with these however, from number of sources, including Irish and Scottish.

There is also a leavening of Chris Ormston's own compositions; although these work well, and are clearly rooted in his feeling for the style of the music, they are perhaps best described as 'serviceable' - here's a clip from Sir Bobby Robson's Rant.  The clarity of his style gives a coherence to the performance of the music, whatever its source.  So, as a demonstration of the music, and as a fine record of an accomplished piper at the height of his powers, this CD hits the spot, and is no less than we'd expect from a producer as experienced and focussed as Mike Yates.

"So," you ask, "do I detect a slight holding back on something?"

Perhaps, though I'm not sure that it's relevant, given the clear focus of the record.  But, having lived quite closely with this CD for some time now, I can't rid my mind of the epithet 'studious', and in terms of pure listening pleasure, by the time we come to Morpeth Lasses for example (track 17 - sound clip), I can't help wishing for a slight loosening of the stays.  Guest musicians (Stewart Hardy on fiddle and Hazel Bullock on flute) contribute restrained backing to this and a few other tracks; sometimes too tentatively featured in the mix, I feel, as in the set of 9/8 jigs at track 12, which seem to capture little of the restless energy that usually characterises 9/8 dance tunes.

Production and presentation are, of course, of high quality: the notes to the tunes are interesting and to the point, and help display the personal relationship between the music and the musician.  It's certainly a record that pipers will want to own, and people in love with Northumbrian traditional music, and indeed, with English traditional music.

Kyloe Records are available through their website at: www.kyloerecords.co.uk