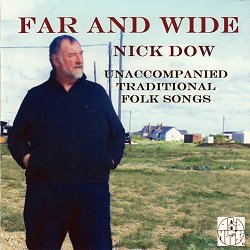 In my review of Nick Dow's previous CD, I wrote: '... I wish there were more like it'.  In his Press Release, Nick mentioned this and a couple of other reviewers' comments, and writes: 'I am wondering why I did not make this CD a long time ago'.  This may be the first time that any comments of mine appear to have influenced another singer of my own generation.'  And damn me if he doesn't mention me again in this one's Press Release, noting my comment that having a good voice is only half the battle, and that the singer needs to be a story-teller and vary the melody and tone of the song accordingly.

Well, the second is far easier than the first, and I don't immediately notice much melodic variations here, but Nick certainly makes a good job of varying the tone of the songs by varied pace and vocal character.  Here's an example of a bit of both: he collected and learned The Dark Eyed Gypsy from members of the Lee family of Travellers in Blackpool - and it shows!

The CD's title, Far and Wide, reflects the origins of the various songs presented here, that Gypsy one, several Irish ones, English songs from traditional singers in Hampshire, Sussex and Somerset, and a couple from English revivalists.  All are good songs, and well sung, but a short review can't give you sound clips of them all ... but here's a nice version of Another Man's Wedding, (aka The Nobleman's Wedding) from Eddie Butcher.

Reading the fairly comprehensive song notes, it's clear that Nick is happy to combine different versions to produce his song, and even to write the odd verse or two to complement the traditional texts - exactly as he should when need arises.  We generally only go to the trouble of learning a song because of something in it (maybe just a line or a phrase) that 'speaks' to us directly, evoking some past memory or experience.  This is delightfully shown here with Pop Maynard's song The Sun Being Set (aka Ground for the Floor).  When Nick and Mally were staying with their daughter whist renovations were being completed on their own cottage, the line "at night, to my cottage again" gave him that jolt and, as he writes, 'I think I sing that line with special feeling'.

I'm aware that this is a pretty short review of what I think is a very good record - but I'd only be repeating things I already said about Nick's earlier CDs.  Have a look at them via the included links, and get to hear another four sound clips!