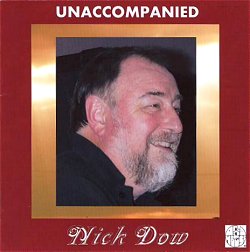 In my review of Nick Dow's previous CD, I wrote: '... unaccompanied, he's really a rather good and interesting singer' and concluded: 'It is a good record with fine songs and some good singing ... I wish there were more like it'.  Well, just over a year later - here is another!  Indeed, in his Press Release, Nick mentions this and a couple of other reviewers' comments, and writes: 'I am wondering why I did not make this CD a long time ago'.  This may be the first time that any comments of mine appear to have influenced another singer of my own generation.

And, indeed, this new offering is far more to my taste, and some of it is quite exceptional.  We start with a song called The Irish Girl here, one verse of which was collected by Cecil Sharp from Bill Brister at Ilminster Fair in 1904.  Most listeners will see it as a member of The Cuckoo family of songs, I think, and it comes with a lovely and slightly unusual tune.  Nick sings it very well.  Pity a Lover is a version of The Bonny Light Horseman, another Sharp collection, this time from Jack Barnard of Bridgewater - and again, with a slightly unusual tune.  In both cases Sharp got only one verse, so Nick has completed the songs from other versions.

The Cruel Wars comes from Len Graham, via Joe Holmes and Eddie Butcher.  Nick manages to sing it with no hint of its Irish origins ... not something many singers are capable of doing.  Making a song your own in this way seems to me to be the first step in becoming a real singer, and Nick succeeds admirably.  One Night as I Lay on My Bed, from Bill House, is another song he sings very well ... as indeed he should, having been taught it 'face to face' by Bill back in 1984.

All the other songs on this CD (sadly only 42 minutes duration, but costing only Ł7 inc p&p) are well sung, if not quite up to the standard of the above mentioned stand-outs.  All have good and interesting tunes - which brings me to the only criticism I would make of this excellent CD.  As you will have heard, Nick has been 'cursed' with a beautiful, tuneful voice which, as is so often the case I think, leads him to value the melody over the story ... the sound over the interpretation.  Where the same beautiful melody is repeated exactly the same every verse , and the text is delivered the same way for every verse, you soon lose concentration ... and the communication between singer and listener - surely the purpose of singing these songs anyway - is lost as well.

To be a better communicator, Nick needs to give a little more thought to how he sings the words in some of these songs.  An excellent example of what I mean comes in the final line of the final, and quite well-known song; Nick speaks, rather than sings: 'If he had, he'd have never done so'.  This is spoken exactly as it would have been sung, with the emphasis on the final word, so.  But, in speech, it would have been: 'If he had, he'd have never done so'.

Nonetheless, this is a great buy for just Ł7.00, via PayPal payment, directly from Nick at: sales@gypsy-wagons.com