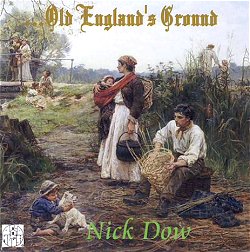 We almost seem to have two CDs here - by which I mean that the alternating guitar-accompanied and unaccompanied songs are different enough as to make you wonder if it's the same person singing.  Apparently, Nick hasn't been active on the folk scene for a number of years, so you may not have heard him before - I hadn't.  As a guitar-accompanied singer, he sounds startlingly like Nic Jones - but unaccompanied, he's really a rather good and interesting singer.

Now, of course, there's nothing wrong with sounding like Nic Jones - one of my favourites of that genre of performers - but the problem is that you're continually thinking about how like Nic Jones he sounds, and finding it difficult to concentrate on the song, and his interpretation of it.  His guitar playing isn't up to the Jones standard, but there's certainly nothing wrong with it ... except that it distracts from the song and, I think, distracts Nick from singing as well as he clearly can, judged by his unaccompanied singing.

The CD contains ten songs, and runs for 41 minutes - or only just half full, a grouch might say.  But I think the quality of what's presented here pretty-well makes up for its brevity.  We start with Who is That?, a night visiting song Vaughan Williams got from Mr Loverage, a Gypsy, in Herefordshire.  Nick got it from the Roy Palmer Bushes and Briars book, and while it's a fairly standard text, the tune is a nice one, and he sings it well, in Nic Jones mode.  The Shepherds Song (We Shepheards are the Best of Men) comes from Bob Lewis, and appears to be the only song on the record to have actually been learned from a traditional singer - most of the others are from books.

The Blacksmith is, again, a very standard version, although Nick has added Phoebe Smith's lovely final verse.  He says he heard it from a Gypsy round a camp fire at Stow horse fair, so it's nice to know that it wasn't just Phoebe and her brother Charlie who had it.  Through Bushes and Briars comes from George Dowden, via Henry Hammond, and is sung to that lovely tune more usually found with Cupid the Pretty Ploughboy.  This is very nice indeed.

The Watchet Sailor is not a song I like very much - a thin story with not much of a point to it - but The Swaggering Blade, while similarly lacking textually, comes with a really cracking tune, and Nick does it full, rollicking justice.  Her Jolly Roving Tar was collected from Mrs Seale in Dorchester Workhouse in 1906, and had but the three verses - but somehow that doesn't matter - they may be conventional, but they work!  Indeed, the last verse is rather reminiscent of the end of John Gaye's Dark-Eyed Susan.  The tune is a good one and Nick sings it well.

Emma Overd might be thought of as a first rate source for Mary on the Well (Wild) Moor, and it's certainly well up to standard - but having heard Sarah Porter's stunning version, I'm not sure anyone else can come close ... except, maybe, the Louvin Brothers.  The Nightingale (aka The Birds in the Spring) is a Surrey version from Mr Grantham, the Holmwood carter.  This may be Nick at his best - or most to my taste.

Finally, a song which he's known for over 40 years but 'never felt I was a good enough singer to do it justice until now', Just as the Tide was Flowing is clearly a song for which Nick cares a great deal.  He writes at some length about how he feels it is 'one of the most compelling and beautiful Traditional Folk Songs (sic) ever written, sung or collected'.

That capitalisation of 'Traditional Folk Songs' says, I think, quite a lot about this CD.  It is ... very folky!  He refers to Old Mr Grantham and Old George Dowden in the song notes, and doesn't sound too different from Dear Old Sabine!  In his introductory page he says he loves singing in Traditional style; it makes him 'feel close to the old singers', and adds that 'in many cases I have lived a similar life'.  He says 'I don't think I have ever sounded better than I do on this album'.  His email address is thetraditionbearer@hotmail.co.uk ... I think you get my drift.  I suppose if you're trying to get gigs in folk clubs, this sort of thing may be seen as necessary - but it makes me feel extremely uncomfortable.  Nonetheless, it is a good record with fine songs and some good singing ... I wish there were more like it.