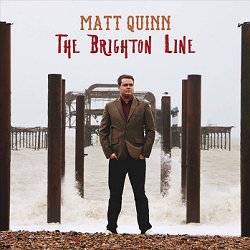 This is, I think, Matt Quinn's second solo CD - and he has appeared on at least four others.  This one has 11 tracks, and runs for just 49 minutes.  It also has no tunes, as his previous one did, so it's all singing.  Now young Mr Quinn is a very accomplished musician - as I noted in my review of his previous offering, Broom Abundance.  Unfortunately, I don't think his singing is up to the same high standard.

Matt is not a bad singer - but I don't think he can be accounted a really good one either.  Firstly, I feel he pitches his songs a little too high; not that he can't sing the high notes, but he doesn't sound entirely comfortable doing so.  I note that he uses a C/F melodeon to accompany some of the songs here ... maybe he could try a Bb/Eb to good effect?  But when he plays his duet concertina or mandolin (where he's not constrained as to what key he uses), or singing unaccompanied as he does for five songs, he still goes for fairly high keys.  This despite being perfectly able to sing some quite low notes in several songs ... obviously he prefers singing high, so I shouldn't complain.

The choice of only singing songs (on this CD) coming from Sussex singers, is perfectly reasonable given that his mum, Rebe, has just discovered that Matt is of the fifth generation of the family to be born in the county.  However, it does rather constrain him to a tracklist that contains 'versions of songs that you will know, some with which you might only be familiar'.  This means that we get the Mary Ann Haynes' version of Riding Down to Portsmouth rather than the fuller and far more coherent one from Tom Willetts, just across the border.

It's nice to hear some songs from good, but little-known singers, and Jim 'Brick' Harber is surely one of them.  His A Bricklayer Bold is a simple story of perhaps little consequence, but Brick invested it with all the gravity of an important ballad ... sad to say, there's very little of that to be heard here and, even sadder to relate, Matt completely omits Brick's superb accidentals - even the (I would have thought) mandatory one at the start of the last line of each verse.  Also nice to hear Gladys Stone's Deep in Love; really just a collection of floaters, but making a coherent and telling song.  It would seem that Gladys sang it to Bob Copper from her father's song book, and she didn't communicate much beyond the words and the tune.  Neither does Matt.

And this is really the core of my criticism of this CD.  Matt sings the words and the tunes, but fails to convince me of their importance to him; I get none of the passion I hope to hear when someone sings to me.  Many singers far more able than me have frequently said that it's the story you're trying to tell in a song - not allowing it to become just a vehicle for a grand, or pretty, tune.  Matt sings to a fairly strict tempo, placing each word accurately on each note of the tune, without appearing to notice that the story gains absolutely nothing through this approach.

If you read my Broom Abundance review (link above), and played the sound clip of Lumps of Plum Pudding, I'm sure you would have realised just how much care and thought he'd given to exactly how to play this tune to its best advantage.  I only wish he'd treated these good songs to the same scrutiny.

Sorry - I wanted to like this CD far more than I do.