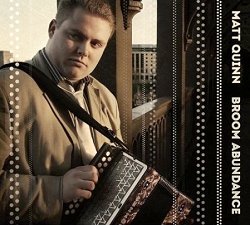 Perhaps the first thing I should say is that my comments on the superabundance of backings and arrangements on the recent Sam Lee and Gavin Davenport CDs do not apply to this one.  Allthough Matt is of the same generation, he's definitely not taking the same approach to record making.

The songs are sung simply - only one has an additional singer - and only three of the tune sets employ an additional musician.  Indeed, it's the sort of record which could have been made when Matt's dad was his age - except for the quality of the playing!  Because this lad can really play the melodeon ... I suppose with Dan Quinn as your father, you're almost bound to grow up to be a good melodeon player!

But we're used to these young Turks being blinding musicians - if their music sometimes leaves a lot to be desired in terms of understanding what the tunes are about.  I've heard Matt playing some blinding show-off stuff in a late-night session, but there's none of that here; I can think of nothing negative to say about what's on offer here - and plenty to praise.  For instance, the only times he uses a guitar accompaniment are on tracks 4 and 10, both played (correctly) on single-row boxes, where the two chords available would be insufficient for the tunes concerned.  Then there's the fact that, when playing 2-rows (where a number of chords are available), he rarely used the same chord sequence for each itteration of the tune.  A slightly odd aspect of the tune sets is that several of them are not 'sets' - ie. several tunes of the same sort played one after the other without a break.  Often the second tune doesn't follow the first in this way, so one has to wonder "what made him put those two together?"  But they seem to be happy pairings nonetheless.

Indeed, my only slightly negative comment on the tunes is with regard to the notes: Matt says that Lumps of Plum Pudding is 'one of the finest morris tunes', but doesn't tell us which tradition this version comes from; and then tells us that Bacca Pipes is from Bampton, but doesn't say that what he plays is not exactly what the Bampton Men dance to.  This is always a problem associated with playing morris tunes out of context ... I know - mea culpa!

That's accounted for 6 of the 11 tracks - what of the 5 songs?  Here I am a little less happy.  Matt is not a bad singer - but I don't think he can be accounted a really good one either.  Firstly, I feel he pitches his songs a little too high; not that he can't sing the high notes, but he doesn't sound entirely comfortable doing so.  Then, the way he sings, particularly the decorations, sounds very deliberate, and carefully exectuted ... again, he doesnt sound all that comfortable - which rather distracts from the song's story.  This is particularly problematic on The Week Before Easter - Gordon Hall's "three-fag" version, which even its originator wasn't always convincing with.  Indeed, it's only on the final track, Katie the Conqueror (not a paean to Mrs Howson's melodeon playing, but to the girl with the world-beating conker), that he sounds really at ease.

So, a good CD, of the sort which should find favour with you, dear MT reader, even if it's not likely to get Mercury Prize nominated.  Perhaps that's to be applauded!