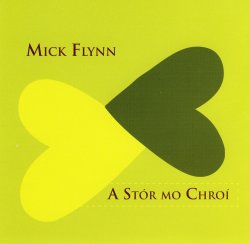 That said, I am not sure why this short recording has been sent for review.  Flynn has already recorded a full length CD (see my very favourable review of this in these pages: Mick Flynn: A Singer’s Dozen, Green Island Records GIR 001, 2000).

Here’s a clue from the accompanying letter from Mick’s wife Jane:

If any song could be termed his ‘signature song’, it would certainly be A Stór mo Chroí.  Mick sings it like nobody else can.  This is the first good recording of him singing that beautiful song.  It was included on Topic’s Lambs on the Green Hills but recorded on location on old ‘field’ machinery when Mick was ‘sung out’.

My surmise is that Mick and Jane wanted this ‘signature song’ preserved for posterity when Mick was singing at his very best - in this they have succeeded - then put down a few more tracks at the same session.

Comparing the two recordings, I find them broadly similar despite the 30 year gap.  Roly Brown’s is a good serviceable recording (Topic 1978, recorded 1976), though it is true that the studio recording brings out more brightness and edge in Mick’s voice.  The 1976 performance is more subdued though the melodic decorations are slightly more ornate but on the recent recording there is more use of rhythmic pauses for dramatic effect.  Both have a climactic keening sound on the 'aroon, aroon', near the end and the ornamentation embraces an unexpected flattened note, to thrilling effect.

This is a home produced 4- track CD with no information beyond the titles and timings, perhaps produced for local radio or a local market where the singer is already known and respected.  More information would be helpful for the wider audience.

The gaps between each track are very short - we are plunged far too soon from the dark misery of Van Diemen’s Land into the soaring beauty of the melody of A Stór Mo Chroí (Brian O’Higgins’ poignant song of farewell to an emigrant).  Space is needed between each song to savour it properly.

However the recording is well worth getting hold of, since none of the tracks here duplicates those on A Singer’s Dozen.  To my ears Mick is one of the best and most moving sean-nós singers in the English language.