On New Year's Eve 1991, I stood in Friel's bar in Miltown Malbay, Co Clare.  Packed and swaying in the noisy crowd shouting to make themselves heard, you couldn't hear the excellent musicians in the corner, scarcely the person next to you.  Unexpectedly, a man began singing - The Blue Tar Road - helped by his wife Jane, holding the singer's hand at arm's length, supporting him by gripping and winding the arm, joining in strongly herself. 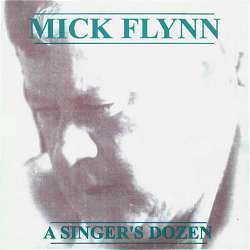 Unbelievably, through the hubbub spread a hush, slowly pervading the crowded bar as people stopped everything to listen: the strong, high, passionate commanding voice gradually compelled silence through the whole bar.  Afterwards John Howson (of Veteran Tapes) and I turned to each other and said simultaneously, "Wish I'd had a tape-recorder!" and then, "No, you could never capture it on tape - never that passionate intensity".

Amazingly, this recording does just that: despite the calmer circumstances of the recording (engineer uncredited), it captures the man, Mick Flynn, singing with all that passionate intensity, giving his all to every song.  It reminds me of travellers such as Margaret Barry and Sheila Stewart; of Liverpool-Irish Bruce Scott and Gateshead Bob Davenport - that high intensity, uncompromising delivery, that urgent desire to communicate the feeling of the song which is worlds away from the decorative introspection of the majority of sean-nós singers or the understated delivery of the narrative ballad singer.

Both push out the voice but decorate differently and on different words: Barry leans on a note ("through the dooring / cricket singing stone"); decorates deliberately and openly round the note on "and often when", "I steal into"; she launches into a clear high note on "bog wood fire"; then uses a sweet high note from the upper register for "and sings in sad sweet undertone" with a swoop down on "undertone".  Flynn uses more complex decorations round the note on "and often when the beetle's horn / I steal unto her shieling lorn and through the dooring peep".  He holds back on "fire" and sings "and hums" still in his natural register.

It's also interesting to compare Flynn's performance of The Rocks of Bawn with Joe Heaney's classic version.  Both show comparatively restrained use of decoration.  Heaney decorates round the note on "give him a good feed of oats, put him out on your green lawn".

Flynn emphasises with decoration "give to them a feed of oats before you start away / put them out on yon green lawn".  While Heaney's approach is generally understated, Flynn launches into a more high pitched drawn out attack (sound clip).

Mick Flynn was recorded by Roly Brown for Topic Records in 1976 with other West Clare singers on 'The Lambs on the Green Hills' (Topic 12TS369, reissued on Ossian OSS9 cassette only).  It's interesting that his style was much the same then.  All his songs are very 'sung-in' by a mature singer greatly at ease with his repertoire.

Many of the songs (like the above) are well known: The Dear Little Isle (a set piece which well suits Mick's style); Once I Loved (led by Jane, with a lovely unison sound when Mick joins in the chorus); The Lowlands of Holland (sung at a good briskish pace which makes it come over freshly).  There are also songs I'd never heard: The Fairy Boy, learnt from his mother; The Nightingale (where a young mother goes to drown her illegitimate child "with the nightingale crying in shame"; a song by Francis Fahy known as 'the old Galway Bay' to distinguish it from the familiar one.  These tend to the sentimental, as do some of the 'rebel songs' (Sean Tracy - also known as The Dying Rebel - features a gray haired father and a fair haired maiden).

This raises an interesting question: what is the difference between a historical ballad, a patriotic poem, a rousing rebel song, a piece of propaganda? Is it in the writing or the attitude of the singer or the style of delivery of the piece? Not a question I feel qualified to answer!

The Three Flowers , celebrating the heroism of Robert Emmet, Wolfe Tone and Michael Dwyer, is sung with great feeling (although I prefer the more delicate pathos of Freddy McKay's version on 'Freddy McKay Live!' MT Cass 200).  Sean South is dignified here by a fine air put to it by Mick.  Mac and Shanahan (learnt from Mick's brother) commemorates two local men killed by the Black and Tans in 1922, after they refused to betray their comrades.  Cathal Brugha (from local singer Paddy Joe MacMahon) is a fine song (about a hero of the 1916 Easter Rising who died in the Civil War in 1921, still resisting the Treaty),

sung in upstanding muscular style which manages to avoid both sentimentality and excessive fervour on lines such as "No foreign gold could buy him, no foe could ever change him / What a model for old Ireland was the life and death of Brugha" (sound clip).

Minor quibbles: the first note of The Rocks of Bawn has been too closely trimmed in the editing; and the tiny pale blue text on the insert is a pain to read!  The songs are perhaps best enjoyed a few at a time - one intense performance after another needs some relief, as would be natural in a session with other singers.  As the accompanying leaflet says, "Flynn's favoured venue is the free-form session where musicians invariably call on him for songs between the reels and jigs".