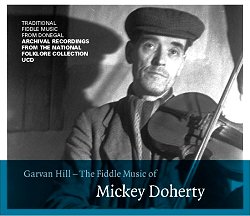 CD 1: 1. Jig learned from the Fairies - Slip Jig;  2. Miss MacLeod's and Philip O'Beirne's Delight - Reels;  3. Blanche's - Hornpipe;  4. Maggie Pickin's - Maggie Pickin's;  5. The Cameronian - Reel;  6. The Sligo Maid and McBoy's Favourite - Reds;  7. The Swallows Tail and Drowsy Maggie - Reds;  8. The Hound After the Hare Pt 1 - Descriptive piece;  9. The Hound After the Hare Pt 2 - Descriptive piece;  10. The Four Posts of the Bed - Descriptive ptece;  11. Bonnie Kate - Reel;  12. The Templehouse and Flogging - Reels;  13. Kitty's Gone a'Millking and The Merry Sisters - Reels;  14. Liverpool and Deny Hornpipe - Hornpipes;  15. The Scholar and The Rights of Man - Hornpipes.
CD 2: 1. The High Level - Hornpipe;  2. The Black Haired Lass - Reel;  3. The Job ofJourneywork and The Little House under the Hill - Set Dance and Double Jig;  4. Paddy's Rambles and The Irish Washerwoman - Double Jigs;  5. The Reeks ofSt Patrick and The Geese in the Bog - Double Jigs;  6. The Blackbird and Paidin 6 Raifeartaigh - Set Dance and Double Jig;  7. Cailin Deas Cruite na mBd and Dulaman na Binne Buidhe - Air and Highland;  8. Stirling Castle and Flowers of Edinburgh - Highland and Reel;  9. Green Fields of America and Heather Breeze - Reels;  10. The Hound After the Hare - Descriptive piece;  11. The Four Posts of the Bed - Descriptive piece;  12. The Cuckoo's Nest and Paddy's Trip to Scotland - Reels;  13. The Harvest Home and The Green Mountain - Hornpipe and Reel;  14. The Jolly Widow and No Other Fellow as Happy - Double Jigs;  15. My Love she has Deceived Me and Unnamed - Marches.
CD 3: 1. Clare's Dragoon's and The National March - Marches;  2. Nora Crionna and Miss MacLeod's - March and Reel;  3. The Jaunting Car and Off She Goes - Double Jigs;  4. The Five Mile Chase and The Wild Irishman - Reels;  5. The Enchanted Lady and Tatter Jack Walsh - Reel and Double Jig;  6. Ta Do Mhargadh Deanta and Maids of Mullagh - Single Jig and Reel;  7. The Harvest Home and Gravel Walks - Hornpipe and Reel;  8. St Patrick's Day and Haste to the Wedding - Set Dance and Double Jig;  9. The Fiddler and the Fairy (story) and Inver Bay Looks Charming - Story and Air;  10. The Star of Donegal and Belphegor - Air and March;  11. The Rocky Road to Dublin and The Sailor's Bonnet - Slip Jig and Reel;  12. The Stack of Barley and The Corn Rigs - Hornpipe and Corn Rigs;  13. The Hound After the Hare - Descriptive piece.

It is now 27 years since the 2-cassette, 28-track set (The Gravel Walks, CBÉ 002) devoted to the Donegal fiddler Mickey Doherty (1894 - 1970), brother of the more famous John, was released by Comhairle Bhéaloideas Éireann.  His world is no longer the day before yesterday, other than for the older reader, (for whom it will always be the day before yesterday, as is the way of things), and younger listeners will hear his music with younger and thus very different ears.  Successive generations of celebrants - which is what we are - have each clothed traditional music in a veil of their own weaving, to produce an aural equivalent of the dance of the seven veils.  For that reason the release of recordings of this kind, belated or anachronistic as it may seem to some, will always be a timely and salutary reminder of what traditional music really was, and perhaps what it was for.

It is, of course, glorious music, at times shimmering, at times electrifying, and always exuberant in the manner of the genuine traditional musician with none of the phoney excitement which many latterday exponents of the art (for whom it has no real context) peddle.  As such it is likely to be of greater interest to those for whom traditional music is about musicians rather than tunes, and serves not so much as an example of traditional music as manifested in Donegal as exemplary traditional music as manifested in Donegal.  One wonders how many budding fiddlers who heard Mickey Doherty in his prime might have gone home to beat their tin (or brass) fiddles into ploughshares.

The present 3-CD, 43-track set presents his complete recorded repertoire (with the exception of a very few items whose excessive distortion forbade their inclusion).  The recordings, which date from two successive nights in February 1949, have been 'subject to an absolute minimum amount of sound editing' and are, as the notes point out, of 'excellent quality', despite their age and the circumstances of their recording.  The collectors, Caoimhin Ó Danachair and Séan Ó hEochaidh (working on behalf of the Irish Folklore Commission), were in an area in Donegal's Blue Stack Mountains (known locally as Na Cruacha and The Croaghs in Irish and English respectively), to record examples of local Irish-language storytelling, and it was (apparently) by sheer chance that Mickey Doherty should have dropped in at the house in question when the recording machine was running (outside in a van!)

This isn't the first time such a comprehensive set of recordings of a Donegal fiddler has been issued, of course.  Back in 2011, Cairdeas na bhFidileiri treated us to a 3-CD set devoted to Néillidh Boyle, a fiddler of a very different kidney (for whom see Ken Ricketts' and Marya Parker's comprehensive review of A Feeling in the Blood [CNF 007] elsewhere on this site).  Even Michael Coleman currently only warrants a 2-CD set (and I fancy many modern fiddlers would be astonished to hear how Coleman played all those tunes), so fans of traditional music in Donegal seem to be particularly well served.

There is a clarity to these recordings which was not so apparent on their previous appearance, a clarity which allowed Mickey Doherty's performance to persuade me that James Hill's High Level Hornpipe was a decent tune - proof of the adage that a good musician isn't one who plays good tunes, but one who makes any tune sound good.

The fiddle music of Donegal is often viewed through the prism of its Scottish influences, which is obviously evident in these recordings.  The more Caledonian items in his repertoire, which includes such tunes as Miss MacLeod's and Maggie Pickin's, are replete with Scotch snaps and birls (the latter described by J Scott Skinner as a "quaint but senseless feature of the past ages … lacking in dignity and showing … poverty of invention").  That Scottish influence is often associated with seasonal employment in Galloway and elsewhere in the Scottish Lowlands, but the influence of the Caledonian element in Ulster's population must surely have been pervasive throughout Ulster long before Mickey Doherty was born.  There is evidence of that situation in the repertoires of the older musicians from County Down (where musicians from both the Nationalist and the Unionist communities once shared a common musical heritage) as published by Nigel Boullier in his monumental Handed Down (see my review elsewhere on this site; a friend of mine described Boullier's book as 'raising the bar', but his achievement was much more akin to inventing the Fosbury Flop), and later fiddlers elsewhere in Ulster like Francie McKenna in the north of Co Monaghan (who was recorded by Brendan Branagh) are highly reminiscent of both Mickey Doherty and his brother John in style and repertoire.

The repertoire here is marked in particular by:

There are, of course, a number of tunes here which betray familiarity with and the influence of (the recordings of) Michael Coleman, but Mickey Doherty's performances are always dependent on the underlying directness of the Northern, and in particular Donegalian muse (the compilers make a similar point in the notes on one of his 'Sligo' sets).  It is possible, however, to detect an urgency in his playing which reminds me both of the piper Johnny Doran, and of some early recordings of older fiddlers on the other side of the Atlantic, suggesting that this once might have been a more general feature of traditional music in the British Isles which was carried across the Atlantic.

When he is really flying his performance of universally popular tunes is sometimes marked more by a universal musicality than it is coloured by any regional identity.  Compare his rendition of the (London)Derry Hornpipe with, in England, the Northumbrian fiddler Ned Pearson's delivery (TSCD675/Track 5), which the latter referred to as the Ladies Hornpipe (a name which is not without its own interest and was used for other tunes elsewhere).  Similarly, his rendition of the Jaunting Car - surely a version of the Mucking of Geordie's Byre - and of the universal Off she goes, with which it is coupled, could easily be mistaken for any number of Northumbrian fiddlers.  (The second tune - possibly the archetypical single jig [though misleadingly referred to as a 'hop jig' in Irish dancing schools] - is curiously referred to as a 'double jig' in the track listing, though the taxonomy is admittedly rather fluid).  In some ways, even, the similarities between his straightforward rendition of the basic repertoire for dancing and field recordings of Northumbrian and Border fiddlers seem to be more fundamental than those 'foreign' (to Ireland) features - the birls and the droning - which are for obvious reasons cited as Scottish influences.  Perhaps that's exactly what they are, while his treatment of his dance tunes reflects an older, more universal approach to that part of his repertoire.

Intriguingly, his version of the Rocky Road to Dublin, though here conventionally described as a 'slip jig', would seem rather to be a 'hop jig' (to those who make the distinction and in the sense used by musicians).  The tune itself apparently derives from an older tune in 3/2 whose earliest name seems to have been the Key to the Cellar, (which will also be familiar to many as the vehicle for the Jacobite song Cam' ye o'er frae France).  The earlier tune is not a conventional 3/2 hornpipe, of the kind which is strewn with minims where you would least expect them, but of a type which is also represented by the Dusty Miller, which likewise turns up as hop jig in later life.  (As an aside to an aside, Sean O'Gorman's Graceful Norah seems to represent another stage in the life of 3/2 tunes which grew up to be hop jigs, unless they'd always been played differently to 3/2 'hornpipes'.  An '18th century traveller in Lancashire' apparently referred to the 'doodle doodle doodle of the bagpipes', a description which might equally apply to the modern hop jig and to Mickey Doherty's rendition of 'Rocky Road', and is quite different from the 'diddledy diddledy diddledy' of the slip jig).

In a world which seems to be full of anodyne pap masquerading as traditional music this really is the dog's bollocks.  And if I have dwelt on of what might seem like the byways of Mickey Doherty's fiddling, it is because the splendours which burst from his performances of more familiar parts of the traditional Donegal repertoire and of tunes from the O'Neillian canon will obviously be celebrated elsewhere.

The Doherty brothers are seldom mentioned without a mention of their (ostensible) rivalry, or of the partisan following which each had locally before they were 'discovered'.  These recordings provide abundant support for those - and they would seem to have been the dancers rather than the listeners - who were in Mickey's camp.