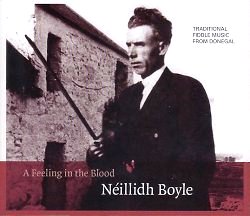 These two collections of fiddle music form Donegal celebrate one man dead for 50 years and another born 70 years ago but still playing as strong as ever.  There are similarities in the wildness of both men's playing, but Neillidh Boyle is very much a man who stands alone.

Born in America in 1889 of Irish parents, Neillidh Boyle returned to Donegal around the age of 8 and quickly became interested in the fiddle.  The playing of Scottish virtuoso players such as William MacKenzie Murdoch and James Scott Skinner and even the music of Paganini were hugely influential on the young Boyle and he developed the incredible technical command of the instrument that was such a huge part of his playing.  The three CDs in this set present all the known recordings of Neillidh Boyle from the handful of 78s he recorded in Dublin in 1937, and three field recordings from 1945, 1951 and 1953.  While he played regularly with his family in his 60s when he lived in Glasgow, no recordings exist of the family band.  Neillidh died in Glasgow in 1961.

The first 6 tracks were recorded in 1937 and released on 78rpm record.  The opening track, The Pigeon on the Gate, shows an impressive turn of speed, a strong and infectious rhythm and, at first listen, a blur of ornamentation.  The two tunes are usually played a fifth lower today than in this recording.  The third track presents the first of two versions of the Harvest Home; a hornpipe that can so easily sound hackneyed is here taken to pieces and reconstructed involving melodic variation, syncopation, double stopping and once again a ferocious speed that leaves the listener gasping in a tour de force that has really only been matched by piper Johnny Doran.

Seamus Ennis had met Neillidh Boyle in 1942 when he worked for the Folklore Commission and had notated tunes and stories from him.  Ennis returned in 1945 with Kevin Danaher and recorded the second batch of 12 tunes on the first CD.  This is the first recording where we hear Boyle play a slow air and the wonderful tone he was able to produce on the fiddle.  The listener can hear the echo of Boyle's mother signing the songs as Gaelge in the bow and finger work of the musician.  There are two brief dance tunes in this group, Dulaman na Binne Buidhe and the Boys of the Lough that must be some of the most powerful fiddle playing ever recorded.  Each is under a minute long, but the rhythm is flying and there's great attack on the fiddle that shows why Boyle was in demand for dancers.  Again there are variations, and inversions that are sometimes reminiscent of the way Paddy Fahy twists tunes into new forms.  In this group we get the first of three renditions of The Moving Cloud, probably the only one of Boyle's compositions that has survived.  While far removed from the version first popularised by Joe Burke this is probably the most recognisable in his playing, the penultimate track offers a recording 10 year later than owes more to jazz than Irish Trad while still remaining the same tune deep down.

The next half dozen tunes were recorded in Letterkenny in 1951, on this occasion Seamus Ennis was accompanied by Alan Lomax.  Each of these tracks is much longer than the Danaher recordings and most consist of three separate tunes.

The final group of tunes come from the Peter Kennedy recordings made in 1953 for the BBC on a Ferrograph tape recorder.  This is probably the best known recording due to Kennedy releasing it on his own FolkTracks cassette collection.  CD2 is given over to the full recording including Boyle's opening rant against modern "jungle music" as well as his comments on the tunes themselves, ornamentation or embellishment as he calls it, and fiddle technique generally.  On CD 1 we get the tunes in their comment-free form.  The CD finishes off with a glimpse of how Boyle must have earned a bit of a living as an accompanist for silent movies in the 1920s when in playing the slow air The Blackbird.  Boyle introduces his bird song imitation into the tune to remarkable effect as he plays the tune in the upper positions on the fiddle showing his amazing control over the finger-work and bow-work that he espouses as the mark of a good fiddler.

While CD2 is a reissue of the Kennedy release, it is none the less interesting to hear again Boyle's view of life and music.  The benefit of using a tape recorder instead of single discs was that Boyle could hold forth at his leisure without the machinery dictating when he played, spoke or stopped.  It must have been difficult for him with his obvious talent not to be able to make any real sort of living from it and it is ironic that the likes of Morrison and Coleman who enjoyed such success in America were probably emigrating to New York at the same time as Boyle was returning to the rural backwaters of Donegal.

The third CD includes the Long Note programme broadcast on RTÉ radio in 1989, celebrating the centenary of Boyle's birth.  It is a fascinating account narrated by Robbie Hannan and this story supplements the already extensive sleeve notes accompanying the CD.  At the end of this CD are a few tunes played by Boyle's son Paddy and Neillidh's brother Con who had emigrated to America.  Recorded around 1964, Paddy, then in his 20s, plays very much as his father would have showed him, and it's interesting to compare his version of the Green Mountain with the version recorded in 1937.  The single track of Con's playing shows the same strong rhythm as his older brother.  Con was born in 1894 so would have been around 70 years old when this recording was made.

Neillidh Boyle was unique and this recording will stand alongside the brief glimpses we have of other mavericks, and some would say geniuses, of Irish fiddle playing such as Patrick Kelly from Cree or Tommy Potts of Dublin - and we owe a debt to that other great genius of Irish music, Seamus Ennis, because without his enthusiasm and understanding we probably would have no record at all of the fabulous "Fairy fiddler". 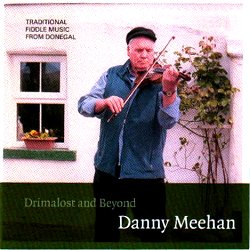 Danny Meehan is still very much a man of the present and is very well known from his days in London and as a member of Le Cheile alongside Raymond Roland, PJ Crotty, both now dead, and Liam Farrell.  Danny released a solo CD in 2000, mostly consisting of tunes recorded in the 1980s, but this 2 CD set presents music recorded since 2007 when Danny finally moved back to his home place in Drimalost.  Reflecting his Donegal heritage this collection includes a lot of highlands and barn dances as well as reels, jigs and hornpipes.  While about half the tunes are played singly, many of the tracks follow the Scottish habit of combining two tunes of different tempos, either highland or jig followed by a reel.  There are about 10 airs included in the 70 odd tracks; almost all are followed by a reel or jig.  Both CDs are almost entirely solo, unaccompanied fiddle, with just 4 tracks of fiddle duets with Aidan O'Donnell and one duet with melodeon player Donal Kelly.  Like the Neillidh Boyle record, the tunes are broken up by occasional short reminiscences from Danny.

From the opening pair of jigs on track one you are hit by the brisk pace and the punchy bowing that one often associates with Donegal.  Danny Meehan also includes a lot of fingered rolls and nice cuts that emphasise the rhythm.  He breaks up the tight bow-work now and again with delicate fingered passages played with what sounds like a much longer bow stroke.  Like Neillidh Boyle, Danny is comfortable playing in the high positions on the fiddle and pitches a number of the airs relatively high and in tunes like The Irish Washerwoman uses the higher positions to allow himself room to add even more variations.

While the Donegal repertoire gets pride of place on this CD, the influence of other regional styles and tunes on Danny is very evident in the inclusion of tunes from Sliabh Luachra and Clare musical companions from his days in London.  Johnny Cope is very much associated with Julia Clifford and Danny speaks of his time meeting Bobby Casey, and there are some Clare influences in Meehan's version of The Wheels of the World when put alongside recordings of Casey playing the same tune.  Inevitably the influence of the 78s recorded by Morrison and Coleman is evident in a large number of the tunes included here, although there are enough personal or regional twists for the tunes not to be mere copies of the originals.  Danny Meehan's fiddle style is unique and this collection also includes a few of his own compositions, although he prefers to credit them to the 19th century poet McGonnagall.

The second half of the second CD is given to older recordings, firstly a selection of tunes recorded in a local bar for Raidio na Gaeltachta in 1977 with guitar accompaniment, and a couple of tunes from a tape made in London in 1964 and sent home.  These early recordings give a fascinating glimpse of Danny's fantastic skill and maturity in his early 20s and show why he received such a warm welcome into the Irish musical community in London at that time.  Finally there are a few tunes recorded in concert at the Glencolmcille fiddle summer school in 2008.

Neither of these CDs could be considered easy listening or something for the casual listener, but somebody with a real interest in Irish traditional music will derive a huge amount of reward and delight from these CDs.  Repeated listening always reveals more depth to the style and technique of two giants of 20th century fiddle playing.  The sleeve notes play a big part in setting the context for the music and Cairdeas na bhFidileiri can be justifiably proud of these two additions to their catalogue.

These CDs are available from the Cairdeas na bhFidileiri website www.donegalfiddlemusic.ie as well as Custys music shop and other sites.