Johnny Connolly was born on the island of Inis Bearacháin, Connemara, now unpopulated.  Like the majority, he left Ireland and as a 17-year old, went to the North of England and stopped playing music. 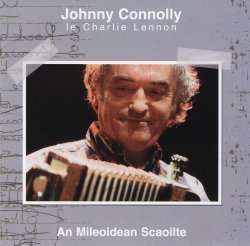 By the time he returned to Indreabhán, Connemara, in 1976, he had a wife and two sons.  The instruments that he had heard in his new home in Inverin, near Spiddal, and subsequently in Ireland, were different.  The one-row melodeon was now rarely heard and the B/C two-row boxes, inspired by the likes of Joe Burke and Joe Cooley were all the rage.  Johnny took up the two-row box and his quickly growing repertoire soon gave the lie to the old joke that musicians from Connemara only knew one reel, Mrs MacLeod's.

Despite the problems with playing the many tunes that modulate, Johnny hankered after the old way of playing on the one-row, reckoning that he could get a better rhythm despite its limitations and started playing it again almost 20 years ago.  This is his third solo CD; his first, An tOileán Aerach (CICD 063), was published in 1993 to huge acclaim, and was followed in 1998 by Drioball na Fáinleoige (CICD 127) - see our review.

The title of the present CD refers to a strange incident in Johnny's youth when his parents were away for the day and to his delight he came across a melodeon.  Unfortunately the instrument (presumably, its case) was locked.  Luckily, one of Johnny's sisters, Nain, found the key and unlocked the melodeon and on that same day he teased his first tune out of it.

He says himself that in many ways he has been trying to unlock the melodeon ever since, and the title An Mileoidean Scaoilte, means the melodeon set free, or unlocked.  The album is dedicated to Nain (who died last year), who set her brother on his musical journey - for example, with the jig Tonra's (sound clip).

The CD includes jigs, reels, a hornpipe, a waltz, a polka and the slow air Amhrán na Trá Báine.

Charlie Lennon provides the superb accompaniment on piano, and also plays fiddle on track 12, Emmet the Piper / The Frost is All Over.  Four of the tracks are arranged specifically to suit the dancing of the Connemara set, with some fine sean-nós stepping, courtesy of Seosamh Ó Neachtain, to be heard on the second tune in the first of these (sound clip - Boil the Breakfast Early / New Mown Meadows), plus a final waltz for those with any energy left!

Many of the other reviews of this CD stress Johnny's superbly rhythmic and articulate playing - and I can only agree.  Indeed, he can fairly - and creditably -

compared with the 'Melodeon Greats' of yesteryear like John J Kimmel, the Wyper Brothers, Pamby Dick or William Hannah.  Further, many of these used two-row boxes (properly called Vienna accordeons) on some of their recordings, so Johnny's accomplishments on the humble one-row almost beggar belief. (Sound clip - First House in Connaught)

Yet no review seems to mention what impresses me most - even at first hearing - about the music found here.  Since Johnny's playing is wholly diatonic, the music sounds quite different from what we have come to expect of 'Irish music' in the past few decades.

Being an English melodeon player myself, I notice this - perhaps - more than other listeners may.  As I have said before in these pages, it's so refreshing to hear Irish music played (as it used to be) on a diatonic melodeon rather than the all-conquering chromatic B/C box which, I believe, has changed the genre far more than most people seem to realise.  Here's a favourite track; the hornpipe The Peacock's Feather (sound clip).

Finally though, a complaint needs to be levelled at the horribly designed, but otherwise excellent 10-page, fold-out insert card.  Cló Iar-Chonnachta, as usual, and quite properly, print this in both Irish and English - but the English part, printed in pale yellow on a light grey background, is pretty-well illegible!

This thoroughly wonderful CD is available in the UK from Copperplate Distribution - www.copperplatemailorder.com