Dreaming Up the Tunes

'Connolly and Son Ltd.  Box players to the Connemara Gaeltacht'

Well, that's probably the way they started out, but now their horizons, like a lot of the musicians from the west of Ireland, are a lot wider.  In the last decade, Johnny senior has played in America, Belgium, Brittany, Croatia, Scotland, Spain.  In May of last year, he was a great hit at a festival of Irish music in Barbados (!)

Johnny learned the melodeon as a boy of the island of Inis Bearacháin, now unpopulated.  Like the majority, he left Ireland and as a 17-year old he went to the North of England and stopped playing music.  By the time he returned in 1976, he had a wife and two sons.  The instruments that he heard in his new home in Inverin, near Spiddal, were different.  The one-row melodeon was now rarely heard and the B/C two-row boxes, inspired by the likes of Joe Burke and Joe Cooley were all the rage.  Johnny took up the two-row box and his quickly growing repertoire soon gave the lie to the old joke that musicians from Connemara only knew one reel, Mrs MacLeod's.

Despite the problems with playing the many tunes that modulate, Johnny hankered after the old way of playing on the one-row, 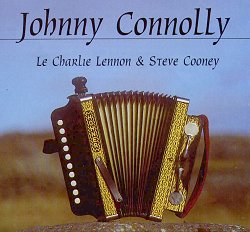 reckoning that he could get a better rhythm despite its limitations and started playing it again about ten years ago.  Perhaps it's because we hear so little Irish music on the melodeon that this album sounds so fresh and vital.  Johnny is a great technician and plays with a great deal of drive.  His playing has a particular lift on the tracks where he is given very sensitive, unobtrusive yet adventurous piano accompaniment by Charlie Lennon.  Charlie's fiddle is also double-tracked on five of the selections, but he always gives Johnny prominence even when Johnny is playing a fine pair of jigs that Charlie composed.

The basis of his repertoire are tunes that he learned as a young man, but he brings interest and variety to the album by including tunes from other parts of Ireland.  He seems particularly fond of Kerry music and there are some fine slides and polkas.

It is on the really well-known pieces where we get to appreciate how much Johnny brings that is his own to the setting and decoration of the tunes, and The Blackbird (sound clip) and Cooley's Reel are particular delights.  Most people would regard a one-row melodeon as a dance tune instrument but we get two wonderful examples of him playing sean-nós tunes.  One is the famed melody associated with The Rocks of Bawn and he also plays Johnny Seoighe after singing the song beautifully.  Although the album offers variety, he certainly could have included more of that fine singing.  The album was very well recorded at Steve Cooney's studio in County Kerry and Steve's guitar is heard on five of the selections.

The other album gives us the rare opportunity to directly compare father and son as traditional musicians, even playing the same tunes; The Inis Bearacháin Jigs were written by the son for the father and appear on both albums.  The differences are ones that one would easily predict.  Johnny Óg was a boy in the 1970's by which time the significance, importance and potential attached to being a traditional musician in the West of Ireland had radically altered.  The incentive for practice must have been vast compared with a generation before. 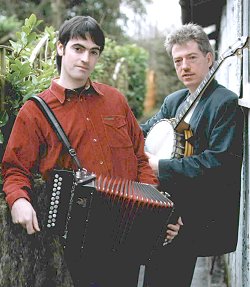 Johnny Óg started at ten; by twelve he was winning the All-Ireland title at the Fleadh Cheoil na hÉireann.  He has gone on to become a professional musician and he shares his album with his fellow-member of the Sean Keane Band.

Brian McGrath grew up in a pub in Brookeborough, Co Fermanagh that was the major centre for traditional music in that area.  He tried various instruments before settling for the banjo in his mid-teens.  He quickly became accomplished musician and has been featured in a number of leading Irish traditional bands including Dervish, Four Men & A Dog, Moving Cloud.

All this means that this second album ought to be viewed in a different light.  Let's ask a couple of questions.  Is this an album whose primary aim seems to be to further the career of two professional musicians come what may?  Does this sound as though the musicians are trying to share their enthusiasm for their tradition?

Well, the answers seem to be 'no' and 'yes' in that order, but don't just take my word for it.  Have a listen to Michael Coleman's Barn Dance (sound clip) and make your own minds up.  Banjo and accordion make a fine combination - forceful modern playing, though never lacking in subtlety.  They are at their most interesting and melodic on slower rhythms such as barn dances and hornpipes.  Quite a number of the selections show the seamless pairing of a traditional tune with a modern one written in the traditional style, and here the name of Charlie Lennon again crops up with several of his tunes, including an unusual sounding pair in 12/8 time with the pair playing against a cello; the only time on the album that they sound as though they are straying outside the tradition.

The Connollys are both fine musicians but it is the father's CD which is likely to make the largest impact for the fine way that the playing of the one-row box is demonstrated and for the overall more convincing nature of his playing.