Love & Liberty - Songs of the Quantocks 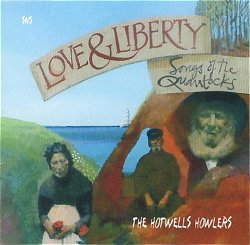 This double CD features songs and tunes from in and around the Quantock Hills in West Somerset.  They come from four sources:

l) Cecil sharp's manuscripts.  He collected songs from singers in the West Somerset area on many occasions from 1904 onwards.

2) Henry and Robert Hammond's manuscripts.  They collected here in 1905 (to gather 'the gleanings of Mr Sharp's harvest') before concentrating mainly on Dorset.

3) Songs noted near Taunton, mainly at Bathpool, in 1916-17 by Phyllis M Marshall, the daughter of the Rector of West Monkton.  She sent the songs she noted to the Oxfordshire collector, Janet Blunt, who included them in her own manuscript collection.

4) Tunes and a song from the manuscript tune book of William Winter (1764-1861), shoe-maker and fiddler who lived at Lydeard St Lawrence and West Bagborough at different periods of his life.

The Hotwells Howlers, from Bristol, are a group of friends - singers and musicians - who run a good monthly song session, and have been involved in numerous 'folk' activities in the Bristol area for some years.  Perhaps their best-known enterprise was the production of William Winter's Quantocks Tune Book, containing 337 dance tunes + 13 track CD, edited by Geoff Woolfe, and published by the Halsway Manor Society, and reviewed here.  This present double CD publication continues their work of making the songs and music of the area better known.  As I know all too well, such endeavours are neither simple nor easy, and the Howlers must be applauded for all the work that has gone into this publication.

As will be obvious, any such group of eleven individuals will contain members with differing skills and abilities, and the fact that not all of them are equally good singers should not surprise us - so I shall not comment on those I feel to be weaker in this respect.  Surprisingly, the playing of all the several musicians in the group seems to be of an equally high standard!

A couple of examples will suffice: here's Geoff Woolfe with a little of the title track, Love and Liberty (which is actually Sweet Swansea), and Quicksteps / King Street Festino.  Regarding Love and Liberty, it seems that the reason I was unaware of this version of Sweet Swansea when I wrote the notes for the May Bradley CD is that in the Roud index Love and Liberty is assigned a wrong number.  In those notes, I wondered how this seemingly localised song came to be sung in Somerset (where Cecil Sharp heard it in 1907 from Mrs Passmore at Pitminster).  It is possible that Phyllis Marshall's source, Mrs Murphy, who said that she'd learned Love and Liberty from a girl in Cardiff, may herself have brought the song to the Bathpool/Taunton area - Pitminster is reasonably close by.

So these two CDs contain 25 unusual versions of some good songs, plus half a dozen good tunes.  Most are well sung, and all are well played.  It also contains the most extraordinary (and somehow 'right') version of the forebitter Rosabella you'll have ever heard - no sound clip; you need to hear the whole thing!  Top marks for a very worthwhile publication.  You can buy it for just Ł10 from the Howlers' website at: www.thehotwellshowlers.com, where you'll also find the song notes and complete texts.