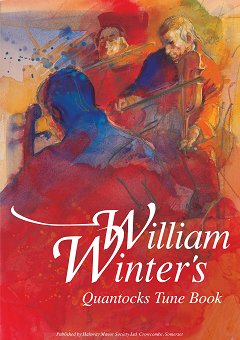 Well, following the publication of The Coleford Jig, it's a pleasure to find another book of (relatively) local tunes being produced by another friend of mine.  This time, though, they are almost all from the 18th century, so there has been no opportunity for the publishers to actually hear any of them being played by any of the musicians from whom they originally came.  Instead, in this case, we get a 13-track CD of some 32 of the tunes played and arranged by well-known young musicians Rob Harbron (concertina), Miranda Rutter (fiddle), Nancy Kerr (fiddle) and Tim van Eyken (melodeon).

Let's look at the book first.  It's nicely produced in a spiral-bound format allowing for ease of use, and the tunes themselves are very clearly presented.  One must assume that they are correct, too, since they've been copied directly from Mr Winter's own transcriptions, with a few corrections (noted) where it appears that he had made mistakes.  There are some oddities of presentation - for instance, the tunes section uses a different typeface for titles and section heads than are employed in the rest of the text.  Similarly, I noticed quite a number of typographic errors, particularly with regard to punctuation marks, and some spelling mistakes ... and the tune, The Lady's Bright Not, appears as that in the CD tracklist and Index, but as The Lady's Bright Knot (far more likely) as the tune's title in the Tunes section.

The book falls into three main sections - 6 pages on William Winter himself, then 129 pages on the tunes, and finally a couple of pages on the included CD.  Geoff Woolfe's piece on Somerset shoemaker and fiddle player William Winter, who lived in the villages of Lydeard St Lawrence and West Bagborough between 1774 and 1861 is very good, and probably tells us as much as there is to tell about the man and his musical context.  The Sources section lists the likely sources of some of Winter's tunes - principally the Bride and Thompson collections, published in the 1750s.  The Notes to the Tunes section is something of a misnomer, since it only covers those tunes for which the editor believes he knows a possible source.

The Index, following the Tunes section is a real disappointment.  The tunes are presented in groups of similar types: jigs; quicksteps; waltzes; marches, etc. - according to William Winter's decisions on their time signature - and the Index follows this practice.  The result is that, unless you happen to know which time signature Mr Winter allotted to the tune you're looking for, you may spend several minutes hunting before you find it ... if you do at all.  A simple alphabetical index would have been far preferable - and actually useful!  Or all the tunes could have included in the already alphabetical Notes to the Tunes section, above.

Each of the tunes sections (jigs, polkas, etc) is intended to be in alphabetical order - except that some of the entries are not.  This just adds to the confusion created by the index.

Then there's the matter of the time signature decisions themselves.  Tunes I would describe as ordinary polkas are shown as either 2/4, 4/4, C (common time) or Cut Time (a 'C' with a vertical line through it is used in place of 2/2, also known as alla breve or, colloquially, 'cut time').  Other familiar rhythms also have several different time signatures allotted to them.  The result is that tunes which you might very well wish to put together in sets actually occur in different parts of the Tunes section.  Not only that, but the contents of some of the various sections seem to have been decided upon solely by reference to their titles, rather than by rhythm - so the Polkas section only contains tunes called The Something-or-other Polka, and marches, quicksteps and quadrilles have to have the words 'march', 'quickstep' or 'quadrille' in their name in order to be included!  But the same criterion hasn't been applied to the waltzes.  Frankly, this is all downright silly!

The included CD ought to be less problematic - let's have a listen.  Well, it sounds very nice - a sort of modern version of the 18th century (sound clip - The Romp, track 1).  However, by track 2 we encounter an oddity - The Skeming Jockey and You May if you Please are both 32 bar jigs, but Country Bumpkin has 48 bars.  Now this may not be terribly problematic in itself - but the words 'dance' and 'dance music' occur frequently in both the press release and in Geoff Woolfe's introductory piece ... and mixing bar lengths during a dance woud be disasterous!  Oddly, the word 'dance' doesn't occur at all in Robert Harbron's introduction to the CD, and nor are any of the musicians particularly known as dance players, I think.  Maybe there should have been better liaison between the book and the CD sides of the production team?

But if the CD is meant just as a source of tunes, perhaps it ought to be a more accurate reflection of the tunes as written in the book - and it's not.  Harbron states, reasonably, that 'the tunes recorded in this book are only outlines: skeleton forms ... in the understanding that the player will fill in the gaps'.  It seems to me that Messres Harbron & Co have 'filled in the gaps' pretty substantially in some cases.  Further, The Ton / The Lady's Bright Knot / Jordan's Retreat are all said to be polkas (in the tracklist) and are all shown with a 2/4 time signature, yet they are played as fast hornpipes - and the first tune has 64 bars while the other two ar 32 bars.  The set of Le Cadeau / The Shapron / Merry Andrew are described as hornpipes, yet I'm sure any dancer would call them polkas - neither do they appear in the Hornpipes section ... indeed, Merry Andrew doesn't appear anywhere in the book.  Actually, I've now been told that it does, on p.126, but unfortunately it has been left out of the Index!

Be that as it may - this is a very welcome publication, containing 377 newly published (in our lifetimes) tunes which will find a warm welcome amongst players of English music.  The accompanying CD itself is a delight to listen to.  It's only a little unfortunate that it was not produced by a more experienced publisher, who would have been more likely to have spotted the typographical errors and the disjunctions between the CD and the book text.