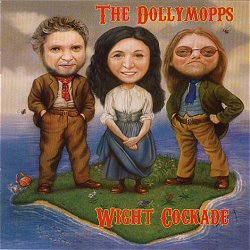 I'm never sure about the idea of getting an artist friend of yours to do the cover graphics for your new record.  Sometimes it works - as on the Old Swan band's Gamesters, Pickpockets and Harlots wonderful LP sleeve by Lynn Breeze - sometimes it doesn't.  Sometimes a photo might have been a better option.  I leave you to decide in this case.

But the record inside the case is another matter entirely - although, to begin with, I wasn't quite sure.  I've known the Dollymopps for a number of years, and always liked their singing - but things seem to have changed a little with this CD.  My impression is that they've introduced an element of 'glee club' styling; particularly the use of unusual harmonies here and there - which really took me by surprise.  But by the end of the record I found that I didn't actually mind them so much, so I played it all again, and found that I rather liked them!

In my review of The New Penguin Book of English Folk Songs I wrote: '... whilst many more [songs] are shown to have been not much more than a couple of generations in the tradition.  The Dark-eyed Sailor, for example, is unlikely to have been more than about 60 years old when collected from Mrs Vaisey by Lucy Broadwood in 1892.'  Indeed, I've found that when traditional singers say "This is a very old one" it almost always turns out to be a pop song of their parents' generation.  So it's really rather appropriate to include elements of glee style into these generally Victorian compositions.

I was also pleased to see that my reservations about their previous CD - making the words fit the tune rather that the other way round - seem to have been resolved in this present work.  I find plenty to like and almost nothing to dislike on this CD.  In particular, I'm pleased to find both Dorana Philpott and Justin Smith taking the lead more frequently, to good effect, and modifying the mainly Virgil Philpott lead on the previous CD.  This is not to demean his very distinctive style of singing but, as with Peter Bellamy and the Young Tradition (with whom they're often compared), a change is often even better than a rest.

For those unfamiliar with them, the Dollymopps are a trio that sing mainly unaccompanied songs from the folk tradition of Southern England - with a particular emphasis on songs collected from their native Isle of Wight.  Their first CD, Long Songs, concentrated on songs published by W H Long in 1886 - inevitably, at that time, without tunes.  They set themselves the task of finding relatively local tunes to fit them, and succeeded splendidly.  The same applies here, and they've even composed two themselves.  Here's a couple of verses from Newtown Randy, which was the original Isle of Wight Festival - three days of 14th century feasting and frivolity in Newtown, originally the capital of the Island - sung to one of their own tunes.  And it's great to see the word 'randy' used correctly here, after years of people changing Herbert Smith's splendid A Starry Night for a Randy into ... a Ramble.

Another bit of singing I like comes with Tally Ho! Hark Away!, another one from Mr Long.  Such a shame that the despicable sport of foxhunting should have produced so many good songs!  Particularly in this case, since foxes were only introduced to the Island in the 1830s, specifically for the purposes of hunting.  Finally, let's hear a bit of Come, Come Me Brave Boys, which was something of a hit at Sidmouth last year.  Here are the last two verses; one with the memorable and strangely timely line "If the banks do not fail", and a new final verse, including some Island dialect if I'm not mistaken, that they wrote themselves 'to bring everything full circle'.  Lovely stuff!