Long Songs: The Twelve Apostles; The Little Carpenter; Moss the Miller and his Mare; Roger and Dolly; The Spotted Cow; The Rambling Sailor; I’m in Haste; The Sailor’s Return; Polly Oliver's Rambles; The Honest Thresherman; I’m in Haste (instrumental); The Farmer’s Boy; Paul Jones the Pirate; Turpin Hero; The Loss of the Ramillies; Jolly Sixpence; The Twelve Apostles (reprise).

Two CDs by English groups (well, a trio and a duo) arrived shortly after each other.  Both perform traditional material - mostly English - in a nominally traditional style.  Neither quite succeeds. 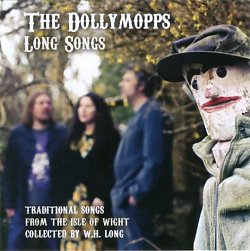 The Dollymopps are Virgil and Dorana Philpott and Justin Smith - Male lead, female harmony, and male bass.  Older readers may recall The Young Tradition, who had a similar lineup, and made a rather similar sound - here's The Little Carpenter.  Personally, while I enjoyed Peter Bellamy's vocal inventiveness, I found it often got in the way of their more serious 'story' songs.  Virgil Philpott doesn't trouble me in that way.  But a criticism I would level at both groups is that 'story' songs (like ballads) work far better when sung solo, and a group treatment may well make a good noise, but often distracts from telling the story effectively.  Similarly, I would suggest that, just because a song has a good chorus, it doesn't need to be sung between every verse, if doing so disrupts the narrative flow.

Because, let's face it, the prime purpose of singing is communication, either of the story being told, or of the emotions it evokes in the singer.  Without that essential communication, it becomes simply background music!  As I said earlier, sometimes the group approach distracts from telling the story effectively.  The Dollymopps are also guilty of the same mistake many revialist singers make - of taking the tunes (and rhythm) more seriously than the words.  As a consequence, there are moments when words or phrases are mangled to comply with melodic or rhythmic requirements - when a simple modification of the tune would easily solve the problem ... resulting in an interesting or memorable moment in a song.  On the soon-to-be-released MT 3-CD set of Sarah Makem there's a sublime moment when a poorly scanning phrase in The Banks of the Callan is resolved through an utterly wonderful melodic manipulation, making the entire song doubly memorable.

The title, Long Songs, has little to do with the length of the songs presented here, but reflects the project of which this CD is an outcome ... the resurection of a number of songs from the Isle of Wight which appeared in the appendix of the 1886 Dictionary of Isle of Wight Dialect, by one Willian Henry Long.  Both Long and the Dollymopps hail from that Hampshire island.  As was usual in the 19th century, the 55 songs Long published appeared without their tunes, so the group has fitted them up with tunes from mainland versions of the songs, generally staying away from the most well-known versions.  On the evidence of the 15 presented here, they've done a good job, as on The Sailor’s Return.

The fairly slim booklet makes a good job of telling us about W H Long and his life, and just about enough about the songs themselves.  Sadly, the actual singers' lives, occupations - names even - remain a mystery, since Long did not publish them. 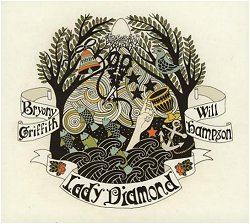 Turning to Bryony Griffith & Will Hampson's CD, Lady Diamond, we have an equally good crack at traditional material - mostly English - in a nominally traditional style.  Bryony and Will have appeared together in numerous other ensembles for almost two decades, and are oviously completely at ease with each other's playing and singing - Bryony sings and plays fiddle, viola and piano, and Will plays melodeon.

The publicity blurb sent with the CD quotes an astonishingly positive review by one Allan Wilkinson, writing in Northern Sky: '[She has] the vocal power of a young Norma Waterson, the poise and attitude of the late Sandy Denny and the stage presence of Janis Joplin.'  Such comments do little but prompt responses like 'Oh - really?'  Norma Waterson she ain't - though a comparison with Eliza Carthy might have been more to the point!

Certainly Bryony's fiddle playing is very pleasing - bags of tone, and invention - and not too many notes per bar!  The publicity blurb also contains the phrase 'This album ... debuts many years of hard work at singing and playing at the same time'.  Not an easy trick!  I've heard many people who seem to be able to do it - until you hear them sing or play solo; then you realise just how good they really are at just singing or playing.  It seems to me that to sing or play really well - and to communicate effectively - requires your entire concentration ... and almost no one can do both simultaneously.

Bryony can certainly sing - she has a great voice for folksongs, and is not afraid to show a bit of passion, but she rarely uses melodic variation (except as mentioned later), or even decoration - relying solely (and repetitively) on a doubling of a note on a single word, as can be heard in track 1, Martinmas Time.  Having encountered this trait so early in your listening experience, you notice every time it re-appears ... and it does - frequently!

Will Hampson's melodeon playing is excellent - rarely getting in the way of the song - and with a style which seems to be much his own.  Mercifully, the ubiquitous 'French accordion' style, so popular amongst the younger English players these days, is rarely to be heard.  Coming back to some points raised earlier, I feel that Bryony is at her best on the few songs which Will accompanies on his own, where she's free to use some melodic and phrasing variation - and does so with good effect on The Lady of York.

One of the 'numerous other ensembles' Bryony has sung with was the Kate Rusby Band, and I fear she has followed Kate's low-key approach to enunciation: I know Anne Briggs' (her source) Martinmas Time very well, but I'm damned if I could make out half the words she sings.  To be sure of my ground, I listened to Annie's version straight afterwords - and could hear every word!

The information on the fold-out sleeve is pretty sparse, but does give the sources for all the tracks.  Sad to say, not a single traditional singer or player is mentioned.  So it goes!