1. Drunken Wag'ner / Over the Moor to Maggie / Ríl Cáit de Henebre;  2. The Boys of Bluehill /The Plains of Boyle;  3. The Further in the Deeper;  4. The Road to Glenlough /John Doherty's Quare Waltz;  5. The Irish Washerwoman / The Kesh Jig;  6. Dochtúir Ó Baoill / Mountain Loney;  7. The Coolin March / Taighean Geala Shieldaig / The Pigeon on the Gate;  8. Bundle and Go / Henchy's Delight / The Two-Penny Jig;  9. The Floating Island / Patrick Doherty's Barndance;  10. The Pikeman's March / Down the Glen;  11. The Belfast Mountains / Headwood Crossing / Station Road. 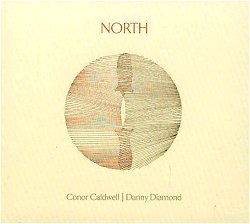 Not so very long ago I reviewed Danny Diamond's solo CD Fiddle Music favourably, and much of what I said there holds true for his playing here; so it's probably worth repeating the statement of intent which was elicited from him then:

I aimed to make something innovative but with the innovation coming from within the tradition.  I hear a lot of Irish music being made with reference to external influences, sounds and ideas, and conversely a lot more traditional players of my generation taking a respectful, often almost academic approach.  I had an idea that not many people were exploring the space between these two approaches, taking a very personalised stylised approach but very much rooted in the tradition at the same time.

I suggested that those sentiments would assuredly strike a chord with many an MT reader.  There is, however, a great deal of difference between the way in which Fiddle Music interfaced with tradition and the way in which North does - beyond the simple fact that Diamond is joined here by another Belfast-born fiddler, Conor Caldwell.  Whereas Fiddle Music was in the first instance a profoundly personal exploration of traditional Irish music rather than traditional Irish tunes, North celebrates different aspects of the Northern heritage simply by re-establishing the vitality of the material selected - much of which will already be familiar to the listener.

The 'North' of North is - perhaps inevitably - Donegal-centric, with references in both the notes and the music to such luminaries as Johnny Doherty, James Byrne and Danny Meehan.  Those are not always straightforward: the opening track - Drunken Wag'ner - may, for example, sound like a Johnny Doherty piece, but turns out to be an old-time American tune.  And it is not only Northern musicians who are celebrated here: the same Drunken Wag'ner is followed by a scintillating homage to the fabulous Rainey Brothers Over the Moor to Maggie - both are in the sound clip.  There are also references to - and the occasional hint of - the Ballinakill Ceili Band, as well as Josef Haydn (!)

The ability to deliver a decent air is the real sign of familiarity with Irish tradition, and such tunes as Dochtúir Ó Baoill are delivered with the bareness which marks traditional renditions, something which is also achieved in the self-composed airs like Mountain Loney which follows it.  Both fiddlers have the dry tone which characterises olden-day fiddlers, and in dance tunes can combine it with a sparkle much as they did: take for example their delivery of Johnny Doherty's Pigeon on the Gate which may initially seem to ooze innovation, but the trees which engender that impression soon give way to a glorious prospect of the ancient woodland which is Irish music.

But you don't have to know any of the back story to enjoy North, which stands on its own two feet as an impressive, highly-enjoyable and illuminating achievement.