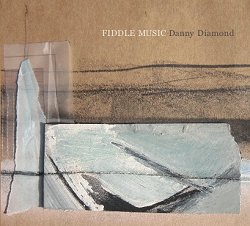 Danny Diamond's Fiddle Music came out last autumn to bucketloads of praise from every corner of the known world.  The editor, who - for the benefit of those who live in darkness - is not a fiddler, invited me to have my two ha'p'orth on behalf of MT about what he called "one of the most interesting fiddle CDs I've heard …"

Some readers may already know Danny Diamond (a name to be coveted by any East End wide boy - if such things still exist) from his job at the ITMA in Dublin.  More will be familiar with him from the various innovative ensembles whose recordings may be sampled on his eponymous website, or from his astoundingly musical family background.  But neither those facts, nor the evidence of previous CDs, really prepares us for the fiddle music which he delivers here.

To quote Mr Diamond himself in interview: "I aimed to make something innovative but with the innovation coming from within the tradition.  I hear a lot of Irish music being made with reference to external influences, sounds and ideas, and conversely a lot more traditional players of my generation taking a respectful, often almost academic approach.  I had an idea that not many people were exploring the space between these two approaches, taking a very personalised stylised approach but very much rooted in the tradition at the same time", which sentiments will strike a chord with many an MT reader, I'm sure.

On this occasion the Boys from Ballyhoo seem to have been right, and it's easy to see why Fiddle Music has had such an impact, for Danny Diamond is one of those few musicians whose playing can conjure the listener to hear - and listen to - each and every individual note of a performance rather than merely the tune which he or she is playing in its entirety.  His playing on these selections has been likened to that of Tommy Potts, and he himself acknowledges Potts' influence.  Perhaps most obviously his playing exhibits a similarly striking tonality.  But where Tommy Pott's playing can be austere, Danny Diamond's is impassioned.  The closest comparison I can think of in that respect - and it's firmly in the traditional arena - is Bobby Casey.  And in my book that comparison is the ultimate accolade.  Here's Danny Diamond setting out his stall on the first track: The Green Fields of America / My Love is in America.

Like the playing of both Potts and Casey, Diamond's playing is at the same time measured and meandering.  I don't mean the latter in any pejorative sense, but rather that where most players would hurry along from A to B without straying from the path, Danny Diamond measures each step of the journey and savours every feature along the way.  In so doing he also draws the listener's attention to the landscape of that journey and persuades the listener to savour it with him.  As a result, and as is the case with both Potts and Casey, hearing Danny Diamond's rendering of a familiar tune is like hearing it for the first time.  This effect he achieves in the same way as older traditional fiddlers: internalising a tune, deconstructing it, and reassembling it again on the hoof, note by treasured note, the cement of melodic convention dissolved in the process.  It is the playing of every note which marks out the genuine traditional musician from most of his or her modern counterparts, for whom the tune is the end result of their endeavour.  For Danny Diamond and his predecessors the tune is a point of departure, the clay for a highly personal construct which evinces a unique relationship with the tune and its constituent parts.  (He admits to keeping his improvisation in check in comparison with Tommy Potts, which may be why his flights of fancy are more reminiscent - to me at least - of those of Bobby Casey).  This is even apparent in the big tunes: Rodney's Glory and The Salamanca, which, as we all know, can be mundane in the extreme in lesser hands but little short of majestic in the right ones.

My only quibble is that occasionally a droned accompaniment - sometimes contributed by Mr Diamond himself - gets in the way of the fiddling: not in its volume, but in its background insistence when something more delicate is happening in the foreground.  Generally, though, the accompaniments blend in so effectively as to be indistinguishable: and the duets are close to perfection.

Overall the effect is spellbinding.  One can only wonder where such a precocious talent can go from here.  Well, hopefully nowhere.  The prospect of more of the same, but with increasing maturity (which I mean in the nicest possible way: he is after all little more than a stripling), is too good to squander on anything else.