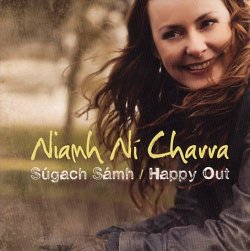 Readers may recall that when I reviewed Niamh NĒ Charra's first CD, ėn Dß Thaobh - From Both Sides, back in 2007, I was a little wary about a young fidder who'd spent 8 years playing in the Riverdance band.  As it turned out, my prejudice was quite unwarrented - it was a lovely record, and I was particularly delighted by her terrific concertina playing.  Now CD No.2 comes along, and already I'm worried again!  So many times I've waxed enthusiastic about a young performer's first record, only to be bitterly disappointed by their second.  Happily, this is not the case here! Indeed, I like this present release even more that I did the previous one.  The concertina playing is equally good, and the fiddling is rather more to my taste.  As a bonus we get three songs here, where there were none on From Both Sides.

Niamh is a good singer, in a quiet, delicate manner.  This is not usually the sort of singing I like but, somehow, I find her version of it to be very effective.  She manages to communicate her emotions without any too-obvious ploys.  See what you think; here's the start of Paddy's Lamentation (sound clip).

In the previous review I concentrated on Niamh's concertina playing, so let's hear some of her fiddling this time; here's a great jig called The Bruckless Shore (aka, Arthur Darley's), though I'm sure I know it by yet another name (sound clip).

The booklet is fairly slight, but tells us much of what we need to know about the tunes and songs,

and displays a little of Niamh's self-deprecating sense of humour.  It's also nice to see that the earlier 'glamour girl' photos have been replaced by ones showing simply a nice looking young woman.  And I;m afraid that I can't let you go without a little bit of that lovely concertina; here with the delightful Limerick Redowa/Going for Water from track 1 (sound clip).

As before, this most enjoyable CD is available from Copperplate, in the UK.