Ón Dá Thaobh - From Both Sides 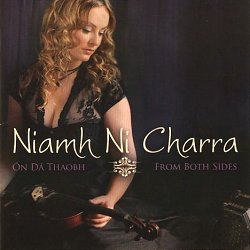 Following 8 years touring the world with Riverdance as the featured fiddler and introducing Riverdance audiences to the concertina along the way, she has returned to Ireland where she is now based.  This album her first, is the result, and draws on her experiences so far.

The release in her native Ireland has brought great critical acclaim and her tour to support the release has made her a firm favourite on the live music scene.

The above quote, from the press release accompanying this CD, inclined me to view it with some suspicion, as you may well imagine!  Had this been a CD of only Niamh's fiddle music I don't think I'd be reviewing it here because, highly accomplished though it is, it's not really my sort of music - or, at least, some of it isn't.

Her concertina playing is another matter entirely - and I love almost every track featuring this instrument.  Indeed, I thought that the album's title, From Both Sides, refered to the tunes played here; those from her native Ireland and those from other parts of the world, perhaps picked up during her international wanderings with Riverdance.  However, on playing the disc it became apparent, to me at least, that the two sides refered to are the fiddle and the concertina music - both surprisingly different from each other in terms of style and feel.

On this, her debut album, she is joined by Brendan Begley, Robbie Bongo Harris, Conor Sheil, Mike Galvin, Eoghan O’Neill and Cathal Synnott, so it's hardly a solo effort, but their contributions remain just that and rarely intrude on the central performances.

The CD starts well with one of Niamh's own compositions, a slip jig called Rhubarb and Ginger - a nice tune played simply and slowly, followed by the two traditional ones at a much faster pace.  The comes the slow air, Caoineadh Eoghan Rua, on concertina.  This is the only concertina track that I'm less than delighted with; the instrument not really lending itself to the sort of slow, expressive playing required.  It's certainly not the case that Niamh can't play slow airs; her An Raibh Tú Ag An gCarraig?, on fiddle, is excellent - and as a bonus it's also very well sung in Irish by Brendan Begley.

Track 4 is a set of jigs, starting with the delightful Micho Russell's, on concertina (sound clip, left).

This was the track which first made me sit up and take notice on the first run through the CD.  A couple of tracks later comes something quite unexpected; Allegretto No 4 by Giulio Regondi, from the mid 19th century.  Apparently, Snr Regondi may well have been the first to introduce Irish audiences to the concertina - the English instrument, in his case.  Niamh plays the piece on her Anglo and shows herself a true maestra.  It's a bit too long to give you the whole track, but here's a snatch of it (sound clip, right).  Lovely stuff!

Returning to the traditional material, I'm a right sucker for a barndance - and when it's as nice an example as Jamesy Gannon's, and played on the concertina as well as this, I could sit listening to it all day (sound clip).  OK, I know, I am going on a bit - so I'll restrain myself and not include a sound clip of the two excellent American hornpies, Wade Hampton's / The Nightingale - also on concertina.

None of the foregoing should leave you with the impression that Niamh Ní Charra is not a great fiddler - she is; check out her final set of Sliabh Luachra slides - but I don't get to hear all that much concertina playing of this quality, so I want to share it, and my enthusiasm, with you.  This is a very good record - you'd not regret buying it, I think - available from Copperplate, in the UK