Time for a Tune

It seems a curious anomaly that - while the Irish are generally supposed to be laid-back and prepared to take all the time in the world over something important (like pouring a pint of Guinness) and the English are reckoned to be always in a rush and impatient with the natural rhythms of life - the music which their younger musicians have been making for the past quarter-century has been paced in exactly the opposite ways.  The English play slowly (they don't have the skill to play faster, some say!) and the Irish play is if each set of blistering reels might be their last.

Things seem to have changed a little recently - some English players have discovered that 'relaxed' and 'comfortable' don't have to mean 'dirge-like', while a growing number of Irish musicians are coming to realise that 'lightning-fast' is not necessarily synonymous with 'exciting'.  I don't know if I've been lucky, but a great many of the CDs of Irish music to pass through my hands over the past couple of years have contained music played at a far more leisurely pace than has been the norm for some time - and far better for it, in my opinion.  The present CD definitely falls into this category, with beautifully relaxed playing from someone whose fiddle playing I'd heard much too little of until now.

I was very taken by Charlie Lennon's elder brother Ben's The Natural Bridge CD (reviewed in these pages) a while back. Charlie played some fiddle there, but it was back in the mix, and what was more noticeable was his flawless and enhancing piano accompaniment on several tracks. I'd also heard him in this latter role on several other records, perhaps most notably on the delightful Ómós do Joe Cooley, with Frankie Gavin and Paul Brock (Gael-Linn CEF CD 115), back in 1986. 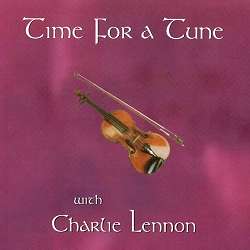 But it's the fiddle which is featured on this present offering, and I'm not sure that I've ever heard better - or, at least, playing which is more to my taste.

It does seem almost unfair that so outstanding a pianist should also be able to play fiddle as well as this,

and to write truly excellent tunes into the bargain!  Try a snatch of the very first track; his own jig Ben's Brogues (sound clip).

Like The Natural Bridge, this one contains a very nice selection of tunes - jigs predominate, a few reels, a slow air, a pair of hornpipes and, treasure indeed for an Englishman, two lovely sets of barndances.  It would be far too easy to just pepper this review with sound clips,

since every track is a cracker, but one tune which particularly took my fancy was this slightly unusual version of The Kesh Jig (sound clip).

Also like The Natural Bridge, this one features a number of guest players, of which the most outstanding contributions,

for me, come from box player Johnny Connolly, who restricts himself to the D melodeon here - to tremendous effect (sound clip - The Belfast Hornpipe).  Lovely to hear this instrument being played in Irish music again recently!  However, despite the strong contributions of all concerned, this one comes across as much more of a 'solo' record than does Ben's CD, particularly as all the piano backup is double-tracked by the fiddle player!

The CD was produced in the Cuan studio which Charlie helped set up, so one would imagine that he had a good deal of say in how the record eventually turned out - so congratulations on a first class job.  His involvement in his own record may have contributed to the comparitive sparsity of the booklet notes (bad form to write too much about yourself!), but I did miss the density of the excellent booklet which accompanied brother Ben's record.  I was also slightly disturbed by the presence of track 10 - two reels Charlie wrote for flutes, played by Michael McGoldrick, Brian Lennon and Michael O'Brien.  It's a live recording made at a concert in the Liverpool Philharmonic Hall, and its whole atmosphere and ambience stands out against the quiet, close-miked studio performances.  Nothing wrong with the track at all - just that it feels (and sounds) completely out of place here.  The only other qibble is the running order ... why put such an outstanding track first?  Keep the best 'til last, surely.