Completely contrary to all custom, not to say good sense, here I am reviewing two CDs of Irish music in one week - and both from Leitrim! The simple fact that both are really wonderful may have something to do with it.

Ben Lennon's name may not be quite so widely known as that of his younger brother, Charlie, whose superb piano playing graces so many of the greatest records of Irish music from recent years 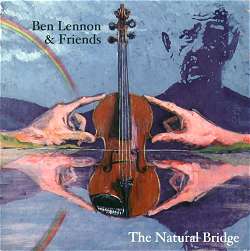 - but Ben is clearly a master of the fiddle, and the playing throughout is just lovely.  Press Releases are so often full of bollocks, but Copperplate Distribution are spot on when they say - "This man has it!"

Ben is the eldest son of one of the best-known musical families in Ireland and there is an indefinable feeling of solid roots about his playing.  He also uses a much more percussive style than I am used to hearing from Irish fiddlers,

who tend to use melodic techniques to add lift to the tune rather more than the sheer 'grunt' Ben sometimes employs along with a fine repertoire of melodic devices. (sound clip - The Enchanted Lady).  There's shades of Jinky Wells in there, I swear!

He's also not afraid to use what Donegal sean-nós singers are happy to call "going out of tune" to emphasise a note - as heard to great affect in the hornpipe Maguire's Fiddle, a fiddle duet with brother Charlie. (sound clip)

I suppose it's inevitable that the Irish music (and songs) I find the most instantly attractive should be those of which I can hear echoes in my own English heritage.  Often, it's the old country tunes - stepdance hornpipes, polkas and the like - and songs everybody's great grandparents knew.  On this record there's an immediate affinity, but not from that source.  Ben Lennon obviously loves the music off the 78s of the '20s and '30s and, by what has to be sheer coincidence, has chosen to record a number of the same ones which the English dance music revival of the '70s also fell in love with.  The taste was the same - only the generation and the nation were different.

So it is that the two polkas on track 1, Memories of Ballymoate / Gurkin Cross, courtesy of Paddy Killoran, 1937, are the same Church Street / St Mary's which the Old Swan Band (and almost everyone else) couldn't stop playing in 1975.

More well loved 'English' tunes follow with The Primrose Polka (Jimmy Shand, 1950s), Lucy Campbell (Michael Coleman, 1930s), The Mountain Pathway (James Morrison, 1923 - sound clip) and, from a different and rather later vintage, Cathleen Hehir's Jig (De Danann, 1974).  The names may have changed in some cases whilst crossing the water, but the tunes are all there, sitting happily beside Jenny Lind and The Sloe.

Inevitably, there were one or two we missed, and I hesitate to mention the stunning Batt Henry's Barndance

until the English Country Dance Band have it securely in our repertoire.  Oh, all right then, I can be magnanimous - it goes like this ... (sound clip) ... but you'll have to buy the record to hear the other two parts!

The title 'and friends', not to mention the sound clips, will have alerted you to the fact that Ben Lennon had quite an array of friends and family around him in Meehan's bar in Kiltyclogher, where almost all the tracks were recorded, live.  Brother Charlie plays fiddle and occasional piano, sons Brian and Maurice play flute and fiddle and viola respectively, Séamus Quinn handles most of the piano backup and adds some fiddle, too.  John Carty plays tenor banjo and yet more fiddle, Ciarán Curran plays mandola, Garry Ó Briain adds guitar, mandocello and more piano to the mix, and Gabriel McArdle plays concertina and sings two songs.  All contribute superbly to the whole, and I was particularly struck by Maurice Lennon's playing of the reels Rattigan's / The Collier's on viola.

I did feel, though, that Gabriel McArdle's two songs were perhaps, a little out of place here.  They're very nice songs: Flora is a version of Sheepcrook and Black Dog with a couple of floating verses but none of the brooding intensity of Caroline Hughes' epic; while Banks of the Clyde is a 'broken token' song ... unusual in that the returned sailor gives his love not half a ring or a torn hanky, but a 50 cent banknote!  Gabriel has a fine, tuneful voice - but his singing here lacks the intensity and the sheer inventiveness of Ben Lennon's fiddle playing, so, for me, the songs fall a bit flat in this company.

Finally, the CD comes with a very full and graphically well-presented booklet containing a good introduction by Séamus Connolly, short biographical notes on all the players, lots of good photos (but presented in a way that makes it impossible for me to reproduce them at all well here), informative tune notes and a splendid, and quite long, biography of Ben and his music by his son David.  If only all CD booklets were like this!

Cló Iar-Chonnachta are a small independent label from Connemara who have built up a huge catalogue of CDs, MCs and books in a very short time - less than 10 years?  A glance through their output in our Traditional Discography will reveal numerous gems, including a gorgeous CD of the legendary East Clare fiddler, Paddy Canny - a sound clip of whom is featured on our home page.  This present release is right up there with it.

The e-mail address for Copperplate Distribution is changed to: olearyam@ukonline.co.uk