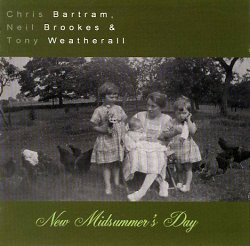 I really must say how much pleasure it gives me that records like this are being made in the 21st century - only ten years ago I wouldn't have believed it possible.  Although Chris Bartram's name comes first, he doesn't hog the limelight, singing only 6 of the 15 tracks on this truly splendid CD.  We start and end with tunes, and I can do no better than to quote Greg Stephens from his review of Neil Brookes and Tony Weatherall's excellent The Whitchurch Hornpipe CD of 2008: 'the music is a joy ... the approach I would characterise as coming from a very civilized pub session, where the music has been quietly lurking for a long, long time.'

Of Chris's singing, another quote, from my review of his 2005 Yorkie CD: 'It's a mark of his seriousness that he considers exactly what and how he sings more than almost any other singer I know ... deciding exactly how lines should be phrased, which words to use, to achieve the effect he requires.  This is done quite naturally and instinctively, and the process is not in any way academic - but the fact that he takes the trouble to do it says a lot about his ability to hold an audience's attention so effectively.'

This approach is beautifully exemplified by his Adieu Adieu here.  I don't think I've ever heard a better version of this lovely song, set to a slightly non-standard tune, taking verses from numerous sources, and then judiciously making it entirely his own.   I'm only slightly saddened that it doesn't have the 'willow-day' line in the chorus!  His American Stranger displays similar care in its construction - here's a couple of verses to enjoy.

You may have noticed the sound of pipes in the Adieu Adieu sound clip above; Neil Brookes plays Leicestershire smallpipes on this and on the infuriatingly short reprise of New Midsummer's Day on the final track.  For the rest of the CD he plays fiddle - exceptionally well.  I've had the pleasure of playing alongside him in numerous sessions over the past few years, and he's one of the finest (and most listenable-to) fiddlers I know.  Tony Weatherall is an equally good melodeon player, and I think it's a bit of a shame that he's somewhat 'back in the mix' on many of the duet tracks found here.  Greg Stephens comments: 'I have played in the Boat Band with Tony Weatherall for ten years, which has educated me in just how well it is possible to play the melodeon.'

Every piece they play is a pure delight, and I'm at a bit of a loss as to which track to use as a sound clip.  I suppose I'll let them decide, and play you a bit of the title track, New Midsummer's Day / Hunting the Rabbit.  Lovely!

You can (and should) buy this great CD from the 101 Company's website.