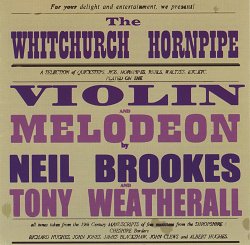 Regional English instrumental music is the flavour of the decade, and here's an extremely welcome addition to what is currently available.  Tony Weatherall (melodeon) and Neil Brookes (fiddle and flute) give us an excellent romp around material from five recently discovered fiddlers' tunebooks, all from north Shropshire.  There is an ever-present danger in recording traditional music from printed sources that you sometimes end up with a precise, carefully 'reading the dots' kind of sound, but have no fears: there is nothing of that here, the playing is as spirited as you could wish.  Which is of course only what you would expect from such lively and experienced musicians as Brookes and Weatherall.  You will probably be unfamiliar with them as a duo, but they are each well-known in their own right.  Neil has also recorded with Roy Clinging, popularising Cheshire tunes and songs; Tony is very widely known, a stalwart of the London scene before decamping back to his native haunts on the Shropshire,Cheshire and Staffordshire borders.  He has recorded extensively with the Companions of the Rosy Hours, the Hackney Ramblers and the Boat Band, to mention only those that immediately come to mind.

The tunes are a fine cross-section of what you find in such notebooks, a mixture of the strictly local, presumably written by the compilers or their close associates, and others culled from wider sources, national or beyond.  Neil Brookes who supplies the liner notes is parochially patriotic (as befits a person bringing local music to a wider public), but he is stretching it a bit when he says 'very few are found in other sources', I think.  I reckon a third or more of the tunes on the CD are found elsewhere, and that proportion is probably higher in the MS books as a whole.  However, 'very few' is open to interpretation!

The question of origin is always interesting when we look at local tunes.  On the front cover, the music is described as 'from the Shropshire/Cheshire borders', and on the back the sources are referred to as 'from 19th century Shropshire manuscripts'.  Both statements are totally true, but they fail to mention an interesting fact.  Ash, the source of four of the books, is indeed in Shropshire and is only three miles from Cheshire.  But it is also only five miles out of Wales, and I think researchers into Welsh traditional music would be well advised to have a thoughtful look at these books.  Neil Brookes points out in the notes that the Whitchurch Hornpipe has a Welsh flavour; and anyone who has studied fiddle music from Cheshire, Shropshire and Herefordshire sources will have noticed that many tunes, especially some local hornpipes, have a decidedly unusual, and possibly un-English, cast.  Historians have often commented on the quasi-genocide of Welsh fiddle music and its practitioners in the 18th and 19th centuries.  Surely it is reasonable to surmise that the tunes, and the fiddlers, may occasionally have fled in an easterly direction, to the adjoining areas of England where fiddle music was more highly prized?  More research, please.

Anway, enough of conjecture, the music is a joy.  Tunes from a couple of centuries ago can be approached from a lot of angles; do you reconstruct it as it might have been, make it up to date, Celticise it, use period instruments, use electric guitars?  Opportunities are endless.  The Brookes and Weatherall approach I would characterise as coming from a very civilised pub session, where the music has been quietly lurking for a long long time.  The melodeon playing, as you would expect from Tony, is as quirky and bouncy as you would wish, always played with a twinkle.  Neil adds some very welcome depth with judicious additions of his excellent octave fiddle and flute, giving a fine 18th ensemble feel, and his fiddle-bowing always seems impeccable to me.  Their twin approach is beautifully demonstrated in the last track, Wellington's Victory, which is a complete delight.  Many MS tunes present problems: is this to be treated as a fast polka or a slow reel?  Is this a waltz, or a fast jig?  Is this an air or a dance?  These things are by no means always clear.  With the last track, they cut this Gordian knot with great panache, by playing this lovely tune in two completely distinct ways, Neil Brookes kicking off with a heartfelt Carolan-like elegance with fiddle and flute, and Tony Weatherall then strikes up with his completely jolly double-time melodeon reading.  Other highlights are the opening tune A Favourite Waltz, and two lovely sets of reels: unlike certain English musicians, this duo is not in the least scared of reels!  There is also a fine Kerry March, which the patriotic Brookes attempts to claim as a Shropshire tune on the basis of the fact that in that county there are a hill and a village both called Kerry.  Well, maybe, but I would think the rather more famous Irish Kerry is a bit more likely.  These books are crammed with marches, and Shropshire musicians were in the army fighting alongside Irish regiments in Ireland, mainland Europe and India throughout the period of this music.  But full marks to Neil for pride in what he has found, and what he has made of it.

Mention must be made of fiddler and farmer John Hardy of Audlem, and Richard Hughes of Ash, who are the owners of these MSS.  They played important roles in the finding and making public of this wonderful music.  I hope their example will be followed by many others discovering old brown dusty books sleeping quietly in attics!

Perhaps I should also in passing declare an interest: I have played in the Boat Band with Tony Weatherall for ten years, which has educated me in just how well it is possible to play the melodeon.

In conclusion: a recent discussion, on the fRoots magazine internet forum concerned the various journalist clichés used in reviews of folk records.  One contributor attacked the practise of ending reviews with the phrase 'highly recommended'.  Well, too bad, I say - what's wrong with clichés?