Lights on the River 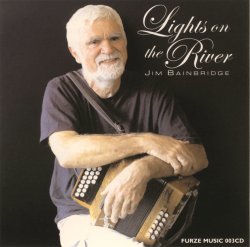 You don't get too many CDs like this to review, these days - more's the pity.  A record by an Englishman who, by all reasonable 21st century definitions, needs to be accorded the adjective 'traditional'!

"How on earth can you say that", you cry "when there's only three traditional songs on the record?"  Well - just listen to it (sound clip) ... and remember how many real traditional singers have a (full) repertoire that looks very much like this when it isn't mediated by a commercial record company's selection!

Maybe the most important reason for me to term Jim traditional is his almost complete lack of self-awareness; he's not remotely concerned by what folkies may think of him - he just plays and sings the stuff he loves, without any agenda, flash or side.  He's exactly the same on a festival stage as he is in a pub or busking a queue.

This may, of course, account for the lack of commercial CD releases - but that doesn't bother Jim - he just puts one out himself every now and again!  You may be sure that one of his records would feature in the MT Records catalogue, if he wasn't doing so.  Here's a bit of Jamie Raeburn as a taster. (sound clip)

This current offering is a complete delight, and far better than the previous one, released on cassette back in 1998, also reviewed in these pages.  The first 11 tracks were recorded live at the Davy Lamp Folk Club, whilst the remainder are studio recordings.

This works well for the songs, but I feel the tunes from the live recordings sound a bit on the hurried side.  Jim obviously isn't the sort of singer to hunt out unusual songs to impress us with, yet there's one thing here I'd not heard before - Tommy Armstrong's classic Trimdon Grange Explosion set to the tune he himself specified. (sound clip)  Another unusual offering is Lord Invader's Rum and Coca Cola - the first recording by a white man?

As I said in the cassette review, it's so refreshing to hear 'Celtic' music played (as it used to be) on a diatonic melodeon rather than the all-conquering chromatic B/C box.  Here's a short clip from Far Frae Hame / Flowers of Edinburgh (sound clip, left) and if you're in need of another 'real' traditional song before we go (even if Lizzie Higgins did change it's melody to one of her Dad's pipe tunes), here's a bit of the lovely Lady Mary Ann (sound clip, right).

Bob Davenport introduces Jim to the audience, and writes a glowing appraisal of the man and his music in the booklet - which should be enough for most people.  Buy it from Jim at: thesnaill200@yahoo.com, or by credit card from www.tradmusic.com, or wait 'til early May when it will be available at: www.folkmusic.net