It was no surprise to find that Norma Waterson's record should have attracted criticism as well as praise when it burst upon the musical consciousness last year.  The criticism was directed, of course, not at the singing but at the choice of material - and came from the same sort of people who were affronted to find that Doc Watson liked to play C&W and rock alongside his classic ballads, that Walter Pardon had some Union songs, and that almost every traditional performer had a large number of music-hall and pop songs in their repertoire.  They thought of Norma as 'almost a traditional singer', and were furious when her musical tastes confirmed that that is exactly what she is! 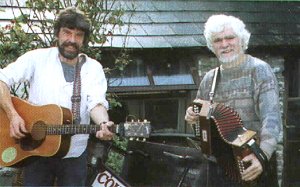 Jim Bainbridge is another such 'para-trad' performer who - despite playing to an almost exclusively folk audience for many of his earlier years - has never been able to shake off his roots and assemble a proper repertory of folk classics.  He just keeps playing what he likes, and since his audiences are now mostly composed of tourists, he is able to get away with it without censure.

And Drunken Billy Goat is certainly the sort of record which would have been very difficult to make in England in the '70s or '80s.

Track 14 epitomises the problem: The Piper in the Meadow (the Irish Set tune beloved of Yorkshire brass bands) is paired with Sam Cooke's Another Saturday Night (sound clip) - I ask you!  In fact, few of the songs here are 'traditional', although most have featured in the repertoires of many traditional singers, like Moonshiner, Little Bridgie Flynn and Are Ye Right There Michael?

Modern songs which probably would have done include Ed Pickford's Cliff Richard Song and Colum Sands' Say Nothing.  Even those songs which have come from the tradition are pretty modern: The Lovely Half Crown, Johnson's Motor Car, Goodbye Mick, Patsy Fagan (sound clip).

The music, however, is older - and it's so refreshing to hear Irish Music played (as it used to be) on a diatonic melodeon rather than the all-conquering chromatic B/C box.

Once again, Jim's eclecticism intrudes, so that, along with some uncontroversial sets of jigs, hornpipes, slides (sound clip) and reels we find: Danse de Chez Nous/The Dancing Dustman/the Dingle Wran Hunting tune, or a schottische from Australian bush fiddler Charlie Batchelor paired with one from the Texas Playboys!

Jim's previous recorded output has been as leader of The Marsden Rattlers dance band, or solo.  Here he's joined by fellow Englishman resident in West Cork, Patrick Forester on guitar, who composed the title track.  He's a nice guitar player who never puts a foot wrong stylistically - but somehow the two of them don't sit easily together rhythmically.  I feel Jim's playing sounds somewhat hurried by the backup at times - particularly on the first track, unfortunately.

But this is a lovely record - a true musical picture of a man, with all his quirks and foibles - which would doubtless upset countless purists, if they ever got to hear it.  The short Three Wives would upset almost anyone!