Traditional songs & instrumental music from the roof of the world

Gesar Songs and Prayers from the 'Saltmen of Tibet'

For all the interest there is in matters related to Tibet, there is not much music available that was actually recorded in the country itself.  The reasons are obvious.  After having annexed Tibet, China has not been particularly keen on allowing people to travel around freely in the region.  And, as with any other culture from oral tradition inside China, the authorities prefer to have a hand in the way the traditional arts are presented to a wider audience.  Folk music is taught at music schools and conservatories.  Folk musicians from China who perform in the West are mostly professionals, graduated from such institutions - and very probably there is no reason why a student hailing from Beijing can't have a degree as a performer of Tibetan folk music.

In the case of Tibet the view officials have on the traditional culture must be even more problematic than in other parts of the country (although the position of the Islamic, Turkish speaking, Uyghur in the northwestern province Xinjiang may be comparable to that of the Tibetans) - the Chinese have done their best to erode and control language and religion, two major aspects of life which define the identity of Tibetans.  The traditional music of these people developed directly from the way they conducted their lives.  Their world view and the messages they wish to communicate in their songs cannot be treated as separate from the medium through which they are communicated. 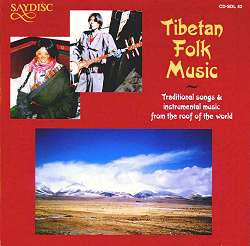 Moreover, such songs are directly related to Tibetan life prior to the Chinese occupation.  In short, Tibetans enjoying their own culture may be regarded by the authorities as highly suspect and subversive.

The Saydisc CD Tibetan Folk Music, recorded in Tibet itself, is therefore quite exceptional, though not entirely unique.  The album comprises repertoire of groups from different parts of the country, recorded mostly in the capital Lhasa - people had gathered there for religious purposes when German cross-over composer and musician Robert Zollitsch made these recordings.  This CD is a rare documentation of non-ceremonial Tibetan music, ranging from highly ornamented a cappella songs that sound as if the vocal chords of the singer are the safety valve of a pressure cooker, to sophisticated unison ensemble pieces.  It is especially the solo songs with their tremendous power that capture the imagination.  Starting from medium pitch they soar invariably to the uppermost register of the voice.

Sertal songs are smooth in comparison; a song from Kham holds a middle position between these two.  The power of some of these voices clearly and regrettably overwhelmed the equipment, but otherwise the recordings are of excellent quality.

Regrettable also is the brevity of the information.  Some of the pieces are identified as a folk song from this or that region, or as an a cappella song by a certain singer.  Hardly a word about their content, no translation of texts - due to the fact that regional dialects differ greatly from each other, writes Zollitsch.  He may be right, but he might have come up with more had he made a greater effort.  At least, that is my guess.

Of one piece he says "On first listening, both the melody and the structure of this song appear to be strikingly different to the folk music of other Tibetan regions."  Now that is puzzling.  Does he want to suggest that the apparent differences will vanish after repeated listening sessions?  Are melody and structure different, or is the difference only apparent; and in case of the latter, how can it be so striking?  Did he wonder or ask the people on the spot what is the background of the differences?

In the arrangement of the pieces he has aimed at "creating a varied programme throughout," providing listings of tracks according to region in the insert for the listener who wishes to listen to the pieces in that order. 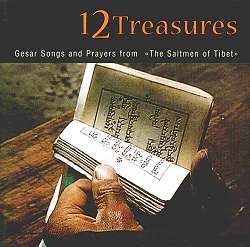 As it is, he has created a rather bewildering patchwork of differing styles (sound clip - Yarkyi Dakmo, played by a Nangma group like the one in the above photo).  Personally I would have preferred a somewhat tighter order.  Any listener preferring variety can always opt for Shuffle Mode.

subtitled Gesar Songs and Prayers from 'The Saltmen of Tibet'.  This is the companion CD to a documentary film by Ulrike Koch, who followed four members of a Tibetan nomad tribe going to harvest salt from a lake.  Most of the CD is taken up with excerpts from an epic about Gesar, a king who set out to occupy twelve salt lakes in Tibet - the mythical setting against which the four harvesters perform their task (sound clip - Ma Ne-Ne Karmo's song about King Gesar's descent into Hell, sung by YŁmen - see photo). 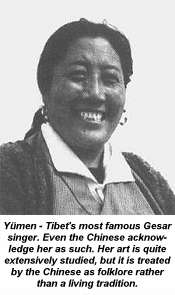 The recitations are interspersed with a few prayers and offerings, related directly to the harvest trek.  This CD is strongly focused.  The texts are printed in German and English.  This is a release that does deserve praise.

Having seen the film I think it's a pity that only a few of the recordings of the harvesters have been included on the CD.  There are a couple of scenes where they can be seen and heard herding their flock of 160 yaks.  They talk, whistle and sing to the animals.  Underpinned by the tugging roar of the relentless high winds these are wonderful sound documents, but they have not made it onto the album.

Still, this is an extraordinary glimpse into the existence of these people, in which their spiritual views are integrated (sound clip - Saltmen's burnt offering prayer).  Koch does not identify the tribe to which these people belong.  The insert doesn't tell where they come from.  Their music does not resemble anything on Tibetan Folk Music.  On the whole, in spite of mixed feelings towards both albums, these CDs are in my opinion indispensable for anyone who wants to know what music Tibet has to offer in addition to the impressive, ear-shattering monastic rituals.