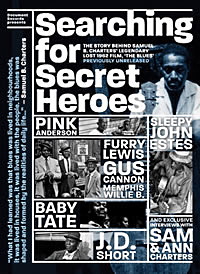 Sam Charters (1929 - 2015) should be known to readers of this magazine for all the work that he did writing books and recording and producing albums mainly devoted to the blues, or to music from the African diaspora (plus the odd album of Irish and Scottish field recordings).  In fact, his first book, The Country Blues, published in 1959, was the first book that I read on the blues.  I was sixteen years old at the time and this single book set me on a musical path that has been followed throughout my life.

Charters had been recording and compiling LPs during the 1950s for Moe Asch at Folkways Records in New York.  However, in 1962 he decided that there was something missing in the blues story - namely the fact that no film had ever been made to show just where the blues came from.  True, there were films, often newsreel films, of singers such as Bessie Smith and Leadbelly, but there was nothing about the blues themselves, nor about the conditions which had brought the blues into existence.  So Sam decided to return to the South, this time with his wife Ann, to make such a film, although, as he freely admits, he had never used a cine camera before and had little idea of how one went about making a film.  Sam's wife, Ann, was an academic who taught literature and who is an expert on the literature of the Beat Generation.  In fact it was the poet Alan Ginsberg who once told Sam Charters that Sam was 'always searching for America's secret heroes'.

What we get in this package is the film, The Blues, plus a fascinating filmed commentary about the film by Sam and Ann Charters, a CD with recordings from the film (these items are often short in the film but complete on the CD), interviews with the musicians, some of the recordings that these performers made in the 1920s and early '30s, together with some songs that were recorded in 1962 but which never made it to the film, and a booklet of notes.

But, of course, there is more to it than that.  Sam Charters had previously had a run in with the House Un-American Activities Committee (HUAC) in 1952 and clearly hated the inequality that he saw in the American South.  "For me, the writing about black music was my way of fighting racism.  That's why my work is not academic, that is why it is absolutely nothing but popularization: I wanted people to hear black music, as I said in The Poetry of the Blues ...  It's where I say, you know, if by introducing music I can have somebody look across the racial divide and see a black face and see this person as a human being - and that's why my work is unashamedly romantic" (Mathew Ismail, Blues Discovery: Reality Across the Divide.  2011, pp.251-52).  In the booklet notes Larry Hoffman says, 'The American cauldron of racism, injustice, and malign segregation that birthed this strong, vibrant, storied music was a dark secret to most.' Sam Charters clearly went out of his way to reveal that secret.

On one occasion, while filming and recording Memphis Willie B in his home, the sheriff and a deputy barged into the house 'looking for illegal liquor'.  They searched the house before leaving.  Sam comments that Willie and his wife knew that the sheriff would return as soon as Sam and Ann left.  Ann's photographs of Willie and his wife, taken after the sheriff's visit, clearly show the stress on their faces.  In another sequence we hear Baby Tate's music playing behind shots of segregation signs - 'Whites only'/'Colored only' etc.  Elsewhere, we hear Tate's harmonica as the camera pans down a street of rundown houses.  We don't need any comments here.  The film and music speak for themselves.

Sam Charters described Mississippi bluesman J D Short as 'a very special man'.  Here we see him singing the train blues Sliding Delta, accompanying himself on guitar harmonica and drum, beaten with J D's foot.  It is the sort of arrangement that Short would have used while playing on street corners.  On the other hand, Pink Anderson, a songster from the medicine show tradition, is shown teaching his young son how to play the guitar.  In another part of the DVD we see the grown up son playing a spectacular version of He's in the Jailhouse Now.

Memphis Willie B seems to have done reasonably well in life.  He was so desperate to perform well that, at one point, Sam Charters noticed that his fingers were beginning to bleed.  When Sam pointed this out, Willie just continued, saying that it didn't hurt.  Later Willie's wife apparently burst into tears, because Ann Charters was the first white woman ever to enter her home.  That simple fact just tells us so much.  Furry Lewis, quite a big recording star in the 1920s, had not been so lucky as Willie B and was found sweeping the streets of Memphis for a living.  But he was happy to be back recording again, here joining another old trouper, Gus Cannon, who famously recorded the song Walk Right In in the '20s.  It seems that Gus had never heard his recorded speaking voice.  Sam Charters recorded Gus talking about the blues.  Later, when the tape was played back, Gus didn't seem to realize that he was listening to himself, and kept saying, "that man's speaking the truth".

Perhaps the saddest part of The Blues is to be found at the end of the film when Sam and Ann Charters visited the newly rediscovered Sleepy John Estes.  Estes had recorded extensively from 1929 to 1941 before disappearing into obscurity.  He was one of Ann Charter's favourite singers and Ann and Sam were shocked to see just how badly the years had treated him.  Estes, by now blind, was living in a shack without any basic amenities.  His wife was wearing a tattered dress, his children quiet and fearful.  And yet there was a dignity about him as he sat waiting for the recording people to come and record him again.  Watching this section of the film I quickly realized just what that phrase 'the home of the blues' really meant.  Sam Charters later said that meeting John Estes was 'one of the most searing moments of my life'.

When asked what the blues were, Baby Tate replied, 'When my wife makes me angry.' That may well be, but it is clearly not the whole story.  The story of the blues began with slavery and continued in the lives of Blind John Estes, J D Short, Furry Lewis and all the other black people who were forced to live in a totally unfair society.  And this is what we see in Sam Charter's short film.  We see this inequality and unfairness.  We see people struggling just in order to live.  'The Blues' will never win any awards at film festivals, it's not that sort of film.  But it is the sort of film that needs to be seen, not just by blues enthusiasts, but by anybody who cares about his or her fellow citizens.  I am so pleased that, after so many years, Document Records have managed to produce this essential package and to make it available to us all. One final note.  Document Records say that the set is 'a limited edition'.  I have no idea just how limited it is.  But, if you want a copy, then I suggest that you do not hang around.