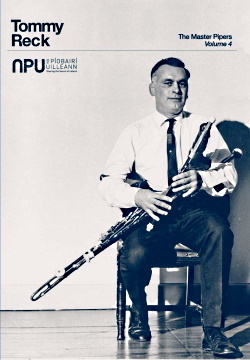 2021 marked the centenary of Tommy Reck's birth and this double CD set from Na Piobairi Uilleann presents a comprehensive selection of Tommy's piping from the late 1940s up to around 1964, a period before ill health caused him to stop playing regularly.

Held in high esteem by his contemporaries both in Dublin and around Clare and Galway, Tommy's music remained largely unknown in commercial recordings.  Many aspiring pipers first became aware of Tommy Reck through the three tracks on the Claddagh record The Drones and The Chanters released in 1971.  Further examples of his playing were included on an RTE LP set of Sean O'Riada's radio programmes Our Musical Heritage released in 1981 featuring recordings made in the early 1960s.  Two 78rpm sides released in the late 1950s on the Gael Linn label were reissued in 2004.  Tommy also recorded a duet with Barney McKenna on an early Dubliners EP.

Taken together those recordings add up to less than half an hour of music.  In 1977 Pat Sky convinced Tommy to record an LP, which, while a welcome addition to an enthusiast's collection, did not do justice to Tommy's music.  This release offers over 2 hours of music across two CDs and provides proof that Tommy Reck truly was a genius of the uilleann pipes with a unique style and wonderful creativity both in melodic variation and the tasteful application of technique on chanter and regulators.

Born in the Liberties area of Dublin in 1921, Tommy showed an early interest in traditional music, and piping in particular, after hearing 78 rpm recordings of Liam Walsh.  His parents knew local piper John Potts and lessons were arranged.  John Potts, born in the 1870s, played in a closed or tight style of piping that came from pipers such as Nicholas Markey who also taught Seamus Ennis's father James.  Tommy Reck retained that style of playing throughout his life and used it to provide great drive and rhythm to his playing.  At the age of 13 he won a piping competition in Dublin judged by Leo Rowsome who then invited Reck to attend his classes at the Municipal College.  Reck described himself at this time as a "child prodigy" and the sleeve notes suggest Rowsome invited him to his classes as he had a great store of tunes from John Potts that Rowsome wanted to acquire.  With Potts' blessing Tommy took up the offer from Leo, with whom he became great friends and in later years he played with Rowsome's famous Piping Quartet for radio broadcasts and concerts. :  Poor health limited his ability to play for a long period and cancer eventually led to his early death in 1991.

On all these recordings Tommy plays his Timothy Kenna set of pipes, made in the first quarter of the nineteenth century.  It is the only extant example of a 17 and a half inch chanter by Kenna and is pitched about a tone and a half below concert pitch.  Flat pitch pipes have a lovely mellow, reedy tone, with individual characteristics to certain notes offering great opportunities for skilled players to vary the volume and character of the tone of the chanter to suit the mood of a tune.  The drones and regulators add an extra creamy richness to the overall sound of the pipes.  It is one of the most beautiful sounding and well balanced sets of pipes I have ever heard.

Disc 1 starts with four tracks recorded in 1950 by RTE when Tommy had just won the first prize at the Oireachtas competition.  With regulator accompaniment reminiscent of Leo Rowsome, Tommy plays four tunes that appear to be staples in his repertoire, including wonderful renditions of the Scholar and Hand me down the Tackle, tunes that appear several times across this collection.  These are followed by recordings from Dr Ivor Browne of unspecified dates.  The tempo is very relaxed, the fingerwork is precise and clearly demonstrates Tommy's technique that Brendan Breathnach described as "a nicely articulated non-legato style".  The recording quality might not be perfect but the music shines through and includes more unusual tunes from Tommy.  Prominent in this group of recordings is a version of The Irish Washerwoman that demonstrates Reck's remarkable skills at melodic variation as he totally overhauls the simple melody, transforming it into a tour de force of tight piping mixed with open rolling passages.

The next tracks repeat the 78s recorded by Bill Stapleton in 1949, already covered in our review of the recent CD Taisce Luachmhar.  These are followed by music recorded at a concert in 1964 featuring duet playing by Tommy with Joe Ryan the Clare fiddle player.  The playing is tight and lively and shows a great intimacy and understanding between the two musicians.  Tommy played regularly with Joe Ryan through the 1960s and they won Oireachtas duet competitions in 1964 and 1966.

The next group of tunes was recorded privately around 1960 and provide another selection of fine versions of well known reels and jigs including tunes probably sourced from Leo Rowsome as well as settings from Tommy's early teacher John Potts.  This group also includes the only slow air on this CD, a tune very much associated with Reck The Lament for Staker Wallace, here presented with lovely regulator chords to emphasise the beauty of the melody.

More recordings from Ivor Browne follow; this time Tommy in duet with John Kelly.  Both players are very comfortable with each other's settings here although there is the occasional deviation.  Tommy even manages to play along confidently on the Girl that broke my Heart in G minor using cross-fingering and melodic variations to accommodate B flat and F natural, notes that don't fall naturally under the fingers.  The first CD ends with out-takes from the Gael Linn session that produced the two sides released as 78 rpm records.  Reck's command of the tunes and instrument are supreme and any of these could easily have been released in 1957.  The technically challenging hornpipe The Independent shows Tommy's skill to great effect.  The final track reprises the pairing of Bonnie Kate and Miss McLeod's heard earlier in duet with John Kelly but here in settings that fit Reck's tight fingering style perfectly.  A different take including The Fermoy Lasses was released on 78.

The second CD is devoted to a recording made in 1960 by Sean Reid and Peter O'Loughlin.  At that time Tommy lived in Walkinstown, then a fairly new suburb of Dublin of tree lined avenues and tidy terraces of houses.  In the late 1960s as Na Piobairi Uilleann was being established, Brendan Breathnach was keen to circulate examples of good players among the slowly growing number of new pipers starting to emerge and the "Walkinstown tape" as it became known was circulated widely, copied and recopied over the years, resulting in various versions in different orders, with odd bits cut from top or bottom of tracks.  It is therefore, very pleasing to have this recording recreated using early versions of the tape, including Sean's and Peter's own copies.

This tape showcases once again the skill and creativity of Tommy Reck's playing as well as demonstrating what a fabulous sound he was able to produce from the Kenna set.  Starting with a couple of slow airs, Tommy plays an interesting version of the big reel The Bucks of Oranmore combining elements of the third and fourth parts to create a 4 part setting.  Tommy follows that with Clancy's Fancy played in three different keys.  This tunes sounds like it's related to The Mason's Apron, and Reck gives a wonderful display of technique as he moves from A major through G to D major.

Another ancient slow air from Bunting's 1796 collection is followed by two sets of hornpipes.  The Derry Hornpipe is considered one of the big tunes and Tommy plays five of the six parts published by O'Neill.  The next track includes the Tailor's Twist, often associated with Tommy and it features some very nicely placed and executed triplets. This tune is paired with Spellan the Fiddler, another hornpipe that might be regarded as technically demanding, given its range, intervals and the number of cascading triplets included in the second part.  The other set of hornpipes played later on the CD showcases yet more wonderful tight fingering techniques.

The reel selections include some of the big tunes associated with Tommy and they provide more examples of Tommy's creativity as no two renditions are quite the same.

Of particular interest are three tracks of jigs towards the end of the CD.  Three tunes associated with Brother Gildas and John Potts are taken at a steady tempo and a separate repeat of Old John's jig presents subtle variations on the previous take.  Gildas who traced his piping heritage back to the pre-famine piper Fraher, was an obsessive collector of the work of pipe maker Michael Egan and swapped a Kenna set to acquire an Egan set owned by John Potts.  Potts passed the Kenna on to Tommy Reck.

The whole CD is a delight from start to finish, the pipes are in good voice and Tommy's technique and settings add variety and interest throughout, as well as offering a few jaw dropping moments of absolute brilliance.  Ronan Browne deserves great credit for doing the sound restoration and transfers on both the CDs

Presented in a DVD size case, the two CDs are supported by an 80 page booklet, including a biography of Tommy from his son-in-law; memories of Tommy in his heyday by Mick O'Connor; and more recent reminiscences from Dublin piper Mick O'Brien.  Tommy Keane very ably and clearly analyses Tommy's technique and the influences on his music.  Bill Haneman discusses the basic construction of the Kenna pipes.  There are many photographs of Tommy, his teachers and contemporaries as well as colour photos of the Kenna set of pipes, a small selection from over 60 pictures recently included on the NPU website.

Emmett Gill has provided a comprehensive set of notes on all the tracks, including recording dates and sources to round off this review of a piper whose style is so far removed from much of the piping we hear today.

This collection is a treasure trove of well played music incorporating endless piping tricks and melodic turns which will continue to entertain over many repeated listens.  It is available from NPU at https://pipers.ie/store/products/the-master-pipers-vol-4-tommy-reck/