Traditional Songs and Dances of Sardinia 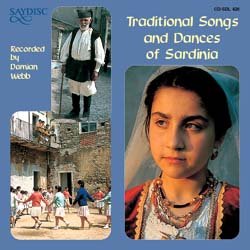 And, with perfect timing, here's a new CD from Saydisc.  The Damian Webb tag alerts me to the possibility of songs by children - though the general presentation of this record did not prepare me for the fact that only 32 of the total 57 minutes playing time would be by adults.

Might the majority of potential purchasers feel slightly cheated?  One could argue that they shouldn't, particularly given the general high quality of the youngsters' performances (sound clip).  But they certainly should be by the quality of the booklet notes - also by Fr Webb - which manage to combine ignorance, irrelevant anecdote, misleading information and some personal observations which reveal a most unpleasantly patronising attitude.  How about this, from the first paragraph:

Country dance clubs were comparatively rare [in 1962], the country people being content to jig about in pairs using Sard steps to Sard music.

I am at a loss to understand how anyone can publish an observation like this in 1998!  It makes an interesting comparison with a comment in the booklet accompanying Ethnica's excellent Ballo Sardos CD from 1997 (also reviewed in these pages):

In the past twenty years, however, the tendency in many villages to form folk-dance groups has gradually been destroying the custom of dancing in the village square.  As a result, the old folks have delegated the joy of collective dancing (a ritual which united the whole group) to a small group of young people who, decked out in folk costume, perform a virtuoso exhibition on a platform to an audience which applauds but which has been dispossessed of its reason to dance.

These recordings were made in 1962 and I would guess that the notes were written not too long afterwards, since they give little indication of any historical perspective.  I don't know if the record has been previously released on vinyl - Saydisc's 'New Release' information sheet claims it is "a valuable addition to our expanding range of traditional world music".  If this is indeed the case, the notes seem uncomfortably anachronistic in a 1998 release.

For example: Fr Webb describes travelling to Baunei especially to hear a player of the launeddas (described as "the launedda [sic] ... a rare double [sic] pipe").  After half a page of irrelevancies we get a brief description of the instrument and its playing method, followed by the observation "The noise is excruciating and I doubt it will survive for long."  Well, only about 3,000 years, and counting!  Fortunately, another Webb prediction which has not stood the test of time.

Had he travelled to the southern hinterland, rather than to Baunei on the central east coast, he would have found plenty of launeddas players - as one still can today.  Moreover, he would have discovered that it takes a lifetime of experience to get to grips with this most difficult of instruments, and might not have been surprised to find that this isolated, mid-twenties player (to judge by the photo) was a rather poor specimen.

Oddly, he was the only person on the entire record to be accorded the dignity of a name - Monni Salvatore Pudrana.  For the rest: "male quartet from Nuoro", "blind accordion player from Santa Maria Navoresse" or "Dorgali folk song group" have to suffice.  Nor is Fr Webb much interested in the music - several tracks have no title other than "Folk Dance music" - and there is only one indication of a song in Sard, despite a lengthy description of his time in Lotzorai and the parish priest's translating "all the songs sung in Sard" into Italian for him.

No, the notes - where they are not chronicling the details of his travel and accommodation arrangements - are almost entirely about the children and their singing games, Fr Webb's special interest, which is not really what the CD purports to be about.  Nonetheless, some of their singing is very good indeed and I'm pleased to have been able to hear it.  The recording quality is excellent for a 1960's field recording - with the exception of the only coro track which is marred by the most horrendous echo from

"a very resonant gymnasium" where they were recorded.  A pity, since the singing seems to be pretty good (sound clip).  Unsurprisingly, Fr Webb felt this "to be an advantage when recording the male quartet - they faced inwards in a close circle with heads down".

Judge for yourselves!  The echo was less intrusive when the 'folk dance group with accordion' performed - though, of course, all you hear is the rather good accordion (player un-named as usual - sound clip).  Surprisingly, since he was in the right area for it, the CD contains nothing of the justly famous cantu a tenores polyphony.

All in all, the music and singing to be heard here is pretty good and well reproduced for the most part.  To call it a "valuable addition" to Saydisc's catalogue must be considered to be something of an exaggeration - it's mediocre by the standards set by companies like Chant du Monde, Robi Droli/New Tone or Ethnica.  To describe the booklet notes as mediocre would be praise indeed!