The ship of migration has always been driven by twin motors, one pushing and one pulling.  In the era of mass migration to the USA, at the end of the 19th and the start of the 20th Centuries, poverty and persecution were among the reasons people uprooted themselves from Europe (it mostly was Europe, even before the formal imposition of racial quotas), while at the same time newly industrialising Americaĺs need for labour held out the prospect of a higher standard of living.  The new Americans often wound up as sweated labour, living in overcrowded slums, and itĺs not surprising that a nostalgic determination to preserve the customs, cooking and music of the old country co-existed with equally determined efforts to make a way in, and adapt to the demands of, the new one.  A century later, the United States is still seen as a land of opportunity by migrants, who now come mainly from the Third World.

Other things being equal, there is, I think a difference in the role of music in the old and new migrations.  (Other things are often far from equal, of course; most obviously, present day African migration, the occasion of this CD, differs from the earlier movement of Africans to the New World in being voluntary.  However ů)  Professional musicians have always had to go where the audience is, and migration was probably a less daunting idea for them than for most people; but the biographies of many recording artists from the earlier years of the 20th Century testify that, when the move was from Polish ghetto, Irish smallholding or Calabrian farm, the people who carried the music of home with them often did so in addition to their day jobs.  The fiddle, the bouzouki or the pipes would be packed with the rest of the family gear for the voyage, but in the new environment, as in the old, music took its place after the dayĺs work was done. 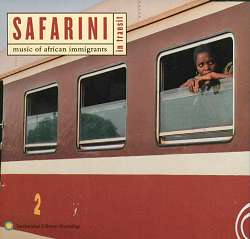 On this CD, however, music was a sideline only for Frank Ulwenya, who moved from Kenya to work for Boeing, and he now seems to be leading LĺOrchestre Afrisound full time.  The other artists all came to the United States as professional musicians and/or music educators.  As such, they are supplying a demand for labour and services, in exactly the same way as their predecessors in earlier waves of migration; the difference is that they do so in a world where music is commodified by the different, but not unrelated, demands for product of the entertainment industry and the education industry.

The musicians featured on Safarini, which is a project of Rakumi Arts International and Jack Straw Productions (British readers, please insert your own jokes), all live in the Pacific Northwest, best known recently for grunge rock and as the birthplace of Jimi Hendrix, but also a richly diverse cultural landscape, and home to Scandinavian, Latino and Asian-American communities, among others.  There is evidently a lively African music scene, appealing both to transplanted Africans and to the majority, and the CDĺs 67 minutes include music from Ghana (Kofi Anang and Obo Addy), Zimbabwe (Lora Chiorah-Dye), Kenya (Frank Ulwenya) and the former Zaire (Wawali Bonane).  There is evidently some cross-fertilisation between the different nationalities; Frank Ulwenyaĺs band, Afrisound, isľon the title track, anywayľsimply Wawali Bonaneĺs band, Yoka Nzenze, renamed.  In part, this is probably a result of the need to put bands together, under whatever name, to supply the demand for live entertainment.  Itĺs not a new phenomenon by any means; in the twenties and thirties, the Memphis Jug Band consisted of whoever was available on the day, and some nights there would be three Memphis Jug Bands working.  Since the guitar music of Zaire (now the Democratic Republic of Congo) has long been a big influence in much of Africa, including Frank Ulwenyaĺs native Western Kenya, this particular collaboration works perfectly well.

It would , in any case, be eccentric to complain about an additional opportunity to hear the magnificent soukous guitarist Huit Kilo, who dazzles whenever he appears.  Here he is on a clip from Wumba Wumba. (sound clip)

Lora Chiora-Dye was formerly married to the late Dumisani Maraire, whose work as an educator from 1968 to 1991, both in ethnomusicology and as a teacher of marimba and mbira, was of crucial importance in developing local awareness of African music; there are apparently dozens of active marimba groups in the Pacific Northwest, and the annual Zimfest attracts hundreds of musicians and dancers.

The 16 members of Chiora-Dyeĺs ensemble, Sukutai, are noted for Ĺtheir performance ability and their dynamic stage shows,ĺ and even without the visual element, their energy comes swaggering out of the CD speakers (sound clip).  Nyoka Musango (Snake in the Grass) is said to be traditional and, as often with Shona songs, is based on a proverb; but it is also described as Ĺoriginally performed by Thomas Mapfumo'.  Mapfumoĺs music is itself a guitar band adaptation of marimba and mbira music, and Sukutaiĺs performance seems to be an interesting example of the appropriation by traditional musicians of a tradition-based pop number.  The main impetus behind this is probably just that the song appeals to them, but there may also be an effort to conform to the performance expectations of the ensembleĺs new, non-African audience.  As always, thereĺs a tension between keeping the old folkways alive, and adapting to the new context (even when as here, the new contextĺs requirement is for a representation of the old folkways!).  As Diana NĺDiaye observes in the CD booklet, however, improved telecommunications, cheaper air travel, and home audio and video taping have all made keeping in touch with home a lot easier than it used to be.  One wonders if the present generation of migrants feels any need to compose songs of farewell to the old country, of the kind that are such an important strand in Irish music.

Certainly the two Ghanaian artists, who both arrived in Seattle as members of the touring group Oboade, have enthusiastically embraced the opportunities to extend and develop their music offered by their new environment.  Admittedly, multitrack overdubbing is not a recent development, and the necessary equipment is available in recording studios throughout the world;

but Obo Addyĺs use of the technique to provide all the vocals and percussion on Amedzro marks him out as a master musician, who is also a virtuoso exploiter of recording technology (sound clip).  Addyĺs Oshi (which means Ĺpound your foot to the beatĺ) is more Ga percussion music, but arranged for brass, guitar, bass and drum kit, alongside African hand drums.  Unsurprisingly, it sounds like Fred Wesley and the J.B.ĺs mixing it up with Africa 70, and once again Iĺm led to wonder how far James Brown was Africanising his music, and how far Fela Kuti was Americanising his.  (A better option than pondering either question, it should be said, is simply to surrender to the groove)

and of electronic percussion, realised by Eduardo Mendonca.  Ko is a painstakingly crafted, and very attractive, arrangement of Lobi xylophone music (sound clip).  Anangĺs other track, Hail, is to my mind less successful.  He teams the kalimba (Ghanaian thumb piano) with didjeridu and flute, but there seems to be something about both the non-African instruments that encourages airy-fairy noodling, and it happens one more time on this track.

All in all, this is a stylistically diverse, but mainly very enjoyable CD that does what it sets out to do, which is to present the work of some of most creative musicians on the African scene at the top left hand corner of the USA.  Apart from its own undoubted merits, it is to be hoped that Safarini will generate further performance and recording opportunities for its artists - and, in particular, for any band that features Huit Kilo.