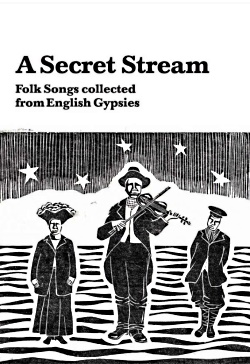 Nick Dow had kindly sent me a ZIP file of the 126 sound files, which reproduce all the tunes of the songs and fiddle tunes covered in this book.  It unzips into 73 files for the songs in the main part of the book, plus separate folders for Carols, Fiddle Tunes and Anglo-Romani songs.  That makes it quite big - 74,843Kb - so it will take a while to download.  But, from what I've heard so far, it will be well worth it - Rod.  Get it HERE

This is the fourth book which has come into being largely through the work of Nick Dow - and for which we should all be very grateful.  The others have been Southern Harvest, The Wanton Seed and Southern Songster, all of which are reviewed in these pages.  The present volume is described as being 'songs selected by Nick Dow' - but Nick has done far more than that: an excellent Introduction and writing extensivly in the Notes to the songs.  Like the others, it has high quality contributions from Steve Gardham, Cohen Braithwaite-Kilcoyne and Steve Roud.  Also, like the others, it features a monochrome cover graphic, but not in this case a wood-cut of the sort used in so many broadside publications.  I find the present one far less pleasing than the others.

In a touching Preface we find Walter and Mary Lee talking of these songs which have been handed down through their families for generations, but are now being almost or completely forgotten.  They appreciate their value and welcome them now being available in this book, to avoid the great loss to their culture if they were lost for ever.  They also hope that those of us, reading this book, will gain some insight into their culture - a hope we will surely all share.

A Secret Stream brings together over a hundred mostly unpublished folk songs and tunes, carols, including songs in the Anglo-Romani tongue, collected from English Gypsies by Victorian and Edwardian collectors such as Cecil Sharp, Ella Leather, Lucy Broadwood, George Borrow and Ralph Vaughan Williams.  Thus, it features songs collected from the late-Nineteenth century through to the mid-1920s - a second volume is promised covering the more modern collections.  Since this will show what has and has not changed in some of these songs in the intervening two generations, I look forward to it with great anticipation.

It would be wrong to give you the idea that most of these songs will be new to you - indeed most are very familiar - as should be expected: we are all human beings and so the same stories will appeal to all of us.  But you won't have heard these versions, and not to these tunes.  As I can't read music, I can't comment on the tunes given here, but my experience of Gypsy singers' musical inventiveness informs me that many of them will be quite spectacular!  Similarly some texts, almost certainly learned from Gorgios, will be word for word close to their broadside origins, others will have strayed far away.  As an interesting example, my wife Danny sings a terrific song she untangled from a 1950s recording of a Northern Irish Traveller, called The Labouring Man's Daughter, which contains some truly poetic lines and images.  Imagine my surprise, looking at A Cornish Young Man (The Knight's Dream) in this book, to find roughly the same story, and all those same poetic lines and images, in a completely different order, in the mouth of an English Gypsy woman, Emma Glover, in Somerset in 1905!

I fear I can make no comment about the Fiddle Tunes section, since I can't read music.  Its single page Introduction, by Nigel Canter, seems a bit flimsy in comparison to those written by Nick Dow elsewhere in the book.  This section contains 16 tunes from Henry Cave, 6 from Tom Cave, and 12 from John Locke.  Cohen Braithwaite-Kilcoyne's notes on the detail of the music are excellent, if fairly brief.

I would guess that the Carols section might be the most interesting in the whole book, had we been able to hear recordings of the original performances.  Of the nine carols presented, I've only encountered four in sonic form - On Christmas Day and The Leaves of Life, sung by May Bradley, A Fountain of Christ's Blood, as sung by Norma Waterson, and Christ Made a Trance, as sung by Martin Carthy.  All of these have been absolutely tremendous!

The Songs/Tunings in Anglo-Romany section, almost all of which is written by Nick Dow, is extremely interesting - if rather frustrating.  Because today's Anglo-Romani is not so much a language, but 'a blend of Romany, Anglo-diction, cant and modern street parlance', where 'the closer the folklorist moves to the root of a word or phrase, the further the interpretation moves away from any definition ... The result is a miscellany of words with a separate connotation depending almost entirely upon context'.  This confusion has been caused by inaccurate attempts at translation by, particularly, George Borrow, along with Alice Gillington and others.  I'd like to quote from the text:

A workable demonstration of this may be found in the first line of the song Rokka down Romanesh which is the one and only song collected by Cecil Sharp in the elusive Romany tongue.  The first line reads 'Rokka down Romanesh, fake to the bosh', and is a good example of the combination of contrasting vernaculars.  The words 'rokka' and 'bosh' are both of Romany descent, however, in their turn, they have been taken from other languaages.  'Rokka', with its meaning of 'talk', or 'give voice', may be from the Latin 'loqua' meaning 'speech'.  'Bosh' is the Gypsy word for 'fiddle' or 'violin', is of Persian origin and may be still in use in Iran today.  The same word is also of Anglo-cant descent, and is used as the word for 'play' or 'joke' and gives rise to the modern word for 'bosh' , meaning rubbish or nonsense.  Finally the word 'fake' is neither Romany, cant nor English, but is a slang, or entirely invented, word used to describe the act of dancing.

Consequently, a few of the songs have no translation into English, though Nick does give a reasonably accurate Glossary of Romany Words, including some 45 examples of the more common ones.

In my reviews of the previous publications in this series I mentioned that, occasionally, it was difficult to know who had written what in the text.  I'm pleased to say that this has been clarified in this volume by having the contributor's initials given at the end of each piece.

If I have a particular criticism of this book, it is of the poor quality of several of the photos.  Not that there are too many photos of Gypsy singers from around the turn of the previous century, for rather obvious reasons, and all of these had been taken by the collectors - in this case, Cecil Sharp.  I don't consider myself as any sort of graphics expert but, as the editor of the MT Magazine, I have had to work with some pretty dreadful photos over the years - and I've generally made a far better job of it than whoever was responsible for those on pp.11,16,18,152,168, and 234.

My main criticism of many song books - including those in this series - has been the separation of the songs, the song notes, and the performers notes into separate parts of the books.  I would like to find the song tablature, text, notes and performer information following each other in a book - but, failing that, a note in each section indicating of the page number(s) of where the rest of the information can be found - particularly as the information is not in strictly alphabetical order for each part.  I have voiced this criticism with several compilers, but have had no explanation beyond "That's how it's always been done."

In this volume, the Biographies of the Singers section is far shorter than in the others in this series, including notes on just thirteen singers.  I initially thought that this was probably because nothing much was known of the lives of Gypsy singers at the turn of the previous century, but I was wrong.  Instead it turns out that all of them are covered here - the paucity is due to the fact that so few of the 'first wave' of collectors actually collected anything from Gypsies!  So I must congratulate Nick Dow on finding so much information, principally from David Sutcliffe.  As before, the Notes on the Songs are superb.

Another excellent addition to the series, and well worth its £15 price tag.