I gave a very favourable review to Taranta's last release, Ballos Sardos, and this present CD from the same team is in some ways quite similar, but in others very different from that record.  Its companion Volume 1 came out several years ago and so is not reviewed in these pages, but covers other types of dance music from the same area. 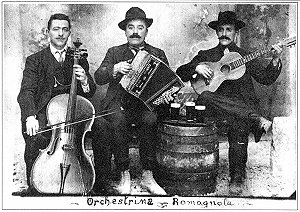 That area being the southeastern part of the province of Emilia Romagna (nothing to do with Rome), roughly the area between Bologna, Florence and the Adriatic coast.  In fact, a few of these recordings were made just over the southern border, in the province of Marche, and one nearby in the neighbouring state of San Marino.

Like the Sardinian record, this present offering comprises modern recordings (1992 to 1997) of traditional musicians - but with one important difference.  In Sardinia the tradition is still very much alive (if somewhat divorced from the communal life of the villages these days), so that many of the performers were quite young.  In Romagna however, the old traditional dances and their associated music were pretty well swept away by the popularity of the liscio ballroom dance craze at the end of the 19th century - a popularity which persists to this day. 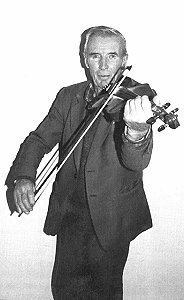 This is not the place to discuss or even describe liscio, but if you can imagine a folk based big-band dance music with a lot of the razzmatazz of C&W you'll have a general idea.  Actually, it's a lot of fun and it's only to be lamented in that it destroyed so much of the older culture in the process.  As a consequence, all the performers on this CD are pretty old so the technical standard of the performances, particularly from the fiddlers, is not as high as one might wish.

Whatever may be lacking in that area is more than made up for by the incredible sense of fun which permeates this music.  I hope no Italian readers will be offended if I say that this music makes me laugh whenever I hear it - because I'm laughing with the players

as they take enormous liberties with phrasing and intonation in a thoroughly mischievous way.  Try this sound clip of Livio Rambelli, known as Ciulèn, as he plays his own polka. 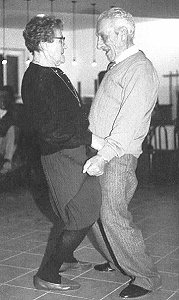 Unfortunately, I'm not able to tell you much about the music or the players because the full Italian booklet notes are cut down to just basic information about the dances in the translation, and my Italian is not up to extracting the fuller details.  The dances are quite old, some going back to medieval times and, as was the case in Britain, they moved into the arena of upper and middle class entertainment in the 17th and 18th centuries before being absorbed by the rural working classes in the 19th.  In Romagna they were widely danced through to the end of the last century, and polkas, waltzes, mazurkas, manfrinas, saltarellos and quadrilles can still be found in small village dance parties to this day.  Although the notes are silent about the music, much of it certainly sounds later to me and is likely to be mainly of 19th century origin, again following the British model.

While the production tells us less than might be wished for about the music and the performers,

I would recommend it purely on the strength of its ebullient playing - and a lot of really good tunes (sound clip - unnamed Manfrina - Leo Ceroni and Loretta Lavalle: accordions).  Clearly, the dancers seem to be enjoying it!