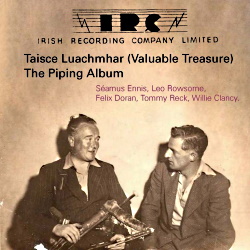 This is the companion record to the recently released Fiddle Album reviewed on the site.  It features recordings made by Bill Stapleton for his Irish Recording Company label of the best known pipers of the late '40s and early '50s, Seamus Ennis, Leo Rowsome, Tommy Reck, Felix Doran and Willie Clancy.  The influence of these players is still felt strongly even in the most recent recording of uilleann pipers.  The relative scarcity of pipers at the time is reflected in this CD being only 56 minutes long across 19 tracks, including one repeat from the Fiddle Album and two songs from Seamus Ennis.  What it might lack in quantity, it more than makes up in quality.  This CD offers some fine examples of piping at its best.

The CD opens with a pair of jigs from Seamus Ennis, both interesting variations on the versions in the common repertoire.  Next up are two songs from Ennis, again well known and, with piano accompaniment and Ennis singing in a fine baritone, they sound almost like Edwardian parlour songs.

A solo set of jigs from Leo Rowsome is followed by four of the recordings featuring Tommy Reck and Felix Doran that were released as bootlegged versions by Copley records.

Felix Doran generates tremendous excitement in the two reels taken at a brisk pace with all regulators blazing.  The first tune, The Pigeon on the Gate, he plays a fifth higher than usual and follows with The Congress reel in the same key.  On The Last of the Travelling Pipers LP Doran plays the Pigeon in the usual key of E minor.  Doran's jigs track offer a chance to compare his playing of the Rambling Pitchfork to the version played by his brother Johnny recorded a couple of years earlier for the Folklore Commission.  There are similarities, but both pipers bring their own individual ideas to the tune.

The centenary of the birth of Tommy Reck is to be marked by a CD due to be released in December 2021 and the tracks on this collection offer a tantalising taster ahead of that recording.  Playing an ancient set of pipes made by Kenna and pitched about a tone and a half below concert pitch, Tommy Reck plays in a tight style derived from Nicholas Markey via John Potts.  His tight triplets and sweet rolls particularly on B and low E are simply delightful.  His tempo is pretty quick but well controlled and the rhythm he generates bring great life to the tunes.

The next six tracks feature Leo Rowsome, solo, in duet and with a pipes trio and quartet.  Rowsome was a key figure in the making and playing of the uilleann pipes from the late '20s until his death in 1970.  The barn dances played in duet with box player Sonny Brogan are a tour de force of exuberant piping.  The other side of this disc has been taken from Leo's own test pressing and the sound quality is obviously lower than the rest of the tracks but well worth having none the less.  The members of the piping trio and quartet remain unidentified but the closeness of the settings and discipline from the different pipers suggest these selections were well rehearsed and the piano accompaniment shows Eileen Lane joining in the mood with little runs under the pipers' long notes.  Other than the songs, these are the only tracks to include the piano.

The CD heads to a close with a track each from Willie Clancy, Ennis and Reck.  A recent RTE CD of Willie Clancy includes tracks recorded in 1947 when he was playing very much his father's repertoire drawn from Garrett Barry.  This track, two years later, shows the influence of Johnny Doran, as Willie plays two tunes from the Doran recordings made by the Folklore Commission.  Starting with a Doran-esque flourish Clancy plays wild and exciting settings of The Bunch of Keys and Rakish Paddy.  The settings vary from Johnny's recorded versions but later recordings of Willie playing Doran's tunes just show what a huge range of variation in melody and ornamentation Doran brought to his playing and how effectively Willie was able to absorb and develop those techniques himself.  Clancy had reportedly just won the Oireachtas competition in Dublin and he sounds on great form.  It's a pity this is the only track available of him playing.

One more selection from Seamus Ennis playing two tunes still very much associated with him is topped off by another selection from Tommy Reck, reprising two of the tunes from the earlier set of reels this time followed by The Fermoy Lasses.  As with all Tommy Reck's recordings, these offer endless lessons in variation and tight technique to keep any aspiring piper interested for years.

As we have come to expect with CDs of classic recordings, the sleeve notes form an integral part of the overall collection.  Harry Bradshaw offers an in-depth biography of Bill Stapleton and the Irish Recording Company including photos of Bill and his wife; Bill featuring alongside Leo Rowsome on the front cover.  Emmet Gill has provided notes on all the tunes and brings a piper's perspective to the settings, technique and sources of the music in addition to giving potted biographies of all the named players.  The whole package is very well put together.

Together with the Fiddle Album, this collection stands as a fitting tribute to the pioneering work of Bill Stapleton as well as giving us a wonderful selection of music and musicianship that had largely lain hidden for over 70 years.  Available from NPU at https://pipers.ie/store/products/taisce-luachmhar-valuable-treasure-the-piping-album/ we can't recommend this highly enough.