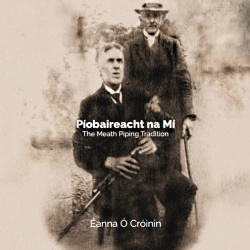 Hot on the heels of recent recordings of uilleann pipers from the classic pre-CD era on the Taisce Luachbhair and Tommy Reck collections, we get a chance to look at some recent recordings from young and very much active pipers.

Eanna O'Croinin who comes from the Gaeltacht area of County Meath released a wonderful record in 2012 featuring ancient music from the Goodman collection among other sources showcasing his fantastic skills on chanter and regulators alongside his creative approach to Irish music.  On this CD he plays music associated with Hugh Newman from County Meath. Newman died in 1939 in his late 80s, and his repertoire had been documented two years earlier.  This album features Newman's music played on flat and concert pitch uilleann pipes accompanied on guitar by Michael O'Suilleabhain.  Featuring 21 tracks across nearly 70 minutes, this is a tour de force of piping technique; cranns, trills, tight triplets and subtle melodic variation.  The music is played with real integrity, while there is an astonishing range of technique on display it's never there for its own sake, rather it's simply another way of showing the richness of the music itself.

The tunes are given lots of room to breathe and the music has a strong rhythm without ever being fast.  There's an exuberance in Eanna's playing as he seems to vary the tune at each turn.  His regulators are mixed behind the guitar but on the Derry hornpipe and the Carolan piece Muiris O'Conchuir which he plays without the guitar, we get a display of lovely harmonies and punchy chords from a player completely at ease with his instrument.  The guitar is nicely blended in the overall mix and lets the chanter sing through clearly and the choice of chord and rhythm always mixes well with the regulator chords audible in the background.  Although many of the tunes might be considered hackneyed old favourites such as Miss McLeod's or Father O'Flynn there's nothing stale about these settings.  There's freshness and tremendous vitality in the playing and the way one tune flows into the next in each set.  The record has the feel of a live recording with the two musicians sparking off each other.  There's no sign of cleaning up or overdubbing. The music is a total delight from start to finish.

Apart from the brief dedication to Hugh Newman, there are no notes with the CD.  The liner shows a contemporary list of Newman's tunes but there's nothing to indicate if the documenting of his repertoire included transcribing his settings or anything else about Newman himself.  It's a pity that this side of the CD is so thin, it would surely have enhanced the enjoyment of the music to have a little more background.

The CD is available from Bandcamp at https://eannaocroinin.bandcamp.com/album/p-obaireacht-na-m-the-meath-piping-tradition .  One slight problem with the copy of the CD we got is that track 2 is missing and replaced by a duplicated track 5.  Fortunately a full download was also provided with the correct tracks included. 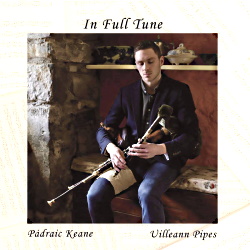 Galway piper, Padraic Keane has a great musical pedigree and piping must run in his veins.  His dad is Tommy Keane, honorary President of Na Piobairi Uilleann, and his grandfather was piper Tommy McCarthy, a Clareman who was a stalwart of the London Irish scene for decades.  Padraic has built on this heritage to carve out a unique style that draws together elements of ancient and modern techniques that belies his relative youth.  He was recognised at 20 years old as Ceoltóir Óg na Bliana (Young musician of the year) at the 2011 Gradam Cheoil awards run by TG4.  His piping has continued to develop since then and this is his first CD, demonstrating his superb command of the instrument.  He plays on three sets of pipes, two flat pitched and one in concert pitch.  Keane has no other accompaniment so that the full beauty of the three sets of pipes can be fully appreciated.

The choice of music and the way Padraic plays it shows the depth of his musical understanding of the technique that was used by the great players whose music he re-interprets.  The selections of music have been inspired by old recordings, some going back to the turn of the 20th century, as well as tunes noted down from pipers who had flourished in the first half of the 19th century.  Keane plays interesting and unusual settings of well known tunes such as the three part settings of The Mountain Road and The Boyne Hunt, as well as less common settings of waltzes including The Snowy Breasted Pearl that Leo Rowsome included in his 1936 tutor for the uilleann pipes.  Padraic acknowledges his link through his dad and his dad's teacher back to Liam Walsh who was recorded on 78s nearly a century ago.  Where he plays tunes associated with Willie Clancy or Seamus Ennis, Keane makes extensive use of the technique and settings from those players but there's still a lot of his own take on the tune as well.

Most of the record is played on pipes pitched in C.  The tone of the set made in the first quarter of the 19th century by Timothy Kenna is intensely reedy and complex and is displayed at it's best in the selections drawn from the playing of Mici Cumba O'Sullivan and Martin Reilly.  Padraic makes great use of the set made by renowned maker Geoff Wooff in a wonderful performance of the slow air An Buachaill Caol Dubh blending rich chords and single notes on the regulators with the drones and chanter.

On the final track Padraic plays his grandfather's Rowsome set to deliver a master class in open style piping, using bubbly rolls and triplets supported by punchy chords and long notes on the regulators as he plays two tunes from Johnny Doran's repertoire and indeed Johnny would have been proud to hear his music delivered with such bravado.

There are excellent notes from Padraic in the accompanying booklet as well as some interesting photos of Padraic at various stages of his life, and the pipes themselves.  The overall production of the whole package is extremely good and it is highly recommended.  The CD is available from Bandcamp at https://padraickeane.bandcamp.com/releases or from Custy's music shop.

Both these CDs show a high level of serious piping technique combined with a maturity and sense of taste that never pushes the technique ahead of the music.  Many an aspiring or even self assured piper would find a huge amount to inspire, entertain and educate in these CDs. 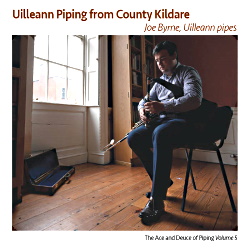 Joe Byrne from Athy Co. Kildare is a graduate of the NPU programme to encourage younger people to take up playing the pipes.  He started with a set from the Loan scheme run by NPU, took lessons in Dublin and is now featured on the fifth in a series of CDs of solo piping produced by NPU.

Playing a concert pitch set, this is piping in the fine old tradition of Leo Rowsome and Liam O'Flynn, supported by the various tutors at NPU.  Joe offers a varied selection of tune types, including a pair of tunes composed by Carolan and a couple of lovely marches, all played with great taste and excellent technique, accompanied by long chords and taps on the regulators.  He has some really nice melodic variations woven into some very familiar tunes to bring new life to the music.  The music has a steady rhythm and an overall brightness and pleasure in the playing.  Nothing is rushed and the rolls, trills and cranns are all clearly articulated on the chanter.  The way he pulls out little nipped notes and other tight fingering in Parnell's March is very pleasing.

His reel playing is brisk with a strong beat to it and he's not afraid to tackle the big tunes such as Colonel Fraser as well as giving his take on piping favourites like The Silver Spear or The Green Gates.  His melodic variation on Miss McLeod's reel are a great example of solo playing at its best.

There are four slow airs in the collection, each melody highlights the sweetness, balance and tuning of his set of pipes.  There are shades of Willie Clancy in the flattened Cs and Fs in The Bright Lady and The Dark Slender Boy (An Buachaill Caol Dubh) although the settings sound closer to Rowsome.

It goes without saying the package is well produced and recorded, and comes highly recommended.

The CD is available from NPU at https://pipers.ie/store/products/uilleann-piping-from-county-kildare-joe-byrne/ or it can be previewed and bought as CD or download from Bandcamp at https://joebyrne.bandcamp.com/