The Smithsonian Institute in Washington DC is a major publisher of recordings from around the world, with a stable of record labels including Folkways, which was acquired in 1987.  With a huge catalogue of US and world recordings, it has recently turned its attention to England, with the release of two valuable, authoritative and immensely enjoyable compilation CDs of English regional music.  English Village Carols, edited and introduced by Ian Russell from his Village Carols archive, 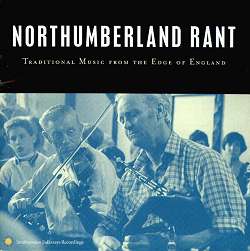 will surely appear in these pages in the near future, but I give nothing away by saying that it is a stupendously knowledgeable, accessible and uplifting production.

Northumberland Rant is equally a labour of love by an editor who knows his stuff inside out, and enjoys sharing his musical loves.  The 21-track CD is a collection of recordings – many previously unpublished - by a wide range of outstanding Northumbrian musicians, past and present.  In a sense, the music doesn't need reviewing, and certainly not by the likes of me:

a cast list of Billy Pigg, Colin Ross, Jack Armstrong (sound clip - Rothbury Hills), Willy Taylor, Kathryn Tickell, Joe Hutton, Pauline Cato and others guarantees that the record is sheer quality from end to end.  Every track is a treasure and a pleasure.

So what is the collection?  It's subtitled Traditional Music from the Edge of England, carefully chosen words that avoid claims to be a comprehensive guide; and the introductory essay in the reasonably thorough booklet makes clear that the selection is in part a personal odyssey.  At the same time, it does succeed in sketching a coherent panorama of the musical life of the area in the last fifty years.

I have to say that I'm not often keen on compilations of the 'NOW..That's what I call Folk Music!!' variety, but here it's fascinating and revealing to have Billy Pigg, Jack Armstrong, Anthony Robb (sound clip - Dargai) and Kathryn Tickell cheek by jowl.  Hearing different players so close together not only highlights the striking differences in style of different players, but also focusses attention on the potential of the instrument itself.

The 1971 Topic recording of Billy Pigg was one of the revelatory experiences of my musical life (sound clip - Archie's Fancy), and has seldom been away from my turntable for long since; but, even now, I find it difficult to listen to from beginning to end.  Putting him in his context, however, has thrown into relief both his playing, and that of the other pipers.  And everyone wins.

But, of course, Northumbrian music isn't all piping, and to be fair, Burt Feintuch makes this point clearly in his essay.  And there are tracks from Willie Taylor (fiddle) (3 sets), Wayne Robertson (Piano Accordion) and Nigel Jelks (Mandolin), High Level Ranters c.1979, The Shepherds, and The Barnstormers – these are important.  But it is here where the gaping holes are – no Alistair Anderson (sure, he's somewhere in the thrash of the Ranters track, but…), no Tom Prince, no Gordon Cutty, no Will Atkinson (in The Shepherds track, but, as Feintuch says, not really audible), no Matt Seattle, no Tom McConville.  No Forster Charlton, either, though that's back to the pipes – although many of the pipers, from Forster and Colin Ross down to Kathryn Tickell are fine fiddlers, too.  All right, we can't have them all, and as I said earlier, this doesn't claim to be a survey.  But I think there probably is an issue of balance here.

The selection of tunes on show is wide.  There's a generous helping of old favourites – Holey Ha'penny, Winshields Hornpipe ,Gentle Maiden, Rothbury Hills, Hesleyside Reel and more, so the CD would certainly serve as a first introduction to music from this part of the world.  However, there's also recently-written stuff from the younger players (Anthony Robb's Lament for Ian Dickson, Kathryn Tickell's Mr Nelson's Birthday Waltz, Chris Ormston's Miss Hannah Ormston)) or fresh takes on classic tunes (Pauline Cato's Random and Cliff), and items from Willie Taylor's eclectic repertoire, including his own compositions Pearl Wedding and Nancy Taylor' Reel which are both firm favourites in sessions not only in Northumbria, but throughout the country.  (Note, incidentally that the titles of these two tunes are reversed in both the track listing and the tune notes)  Although some of the tracks are drawn from distributed recordings, many are previously unreleased, and a good proportion are informal recordings made by the musicians themselves, the compiler, or others such as the American Royce Wilson, whose 1958 recordings of Billy Pigg are welcome additions to our shelves.

The production and presentation of the package is of high standard, with thorough and readable notes on the tunes that breathe the compiler's love and knowledge of the music and the musicians.  It's good to have such an engaging and well-presented package of English music on a major and well-publicised international label.  Add to Favourites.