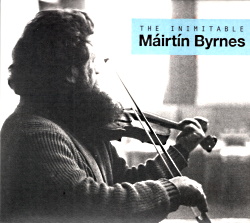 Born in Ahascragh Co Galway in 1927 Máirtín Byrnes was a well known fiddle player around London, first in the early 1950s, then after a break when he lived on the Isle of Wight, in the mid to late 1960s.  In 1970 he returned to live in Ireland.  He was recorded by Bill Leader in 1967 and an LP was released in 1970.  Other than the few tracks on Paddy in the Smoke there is little else of Byrnes' music available commercially.

Lamond Gillespie has already produced collections of music by other London Irish stalwarts Michael Gorman and Jimmy Power and across this collection of two CDs we get over 100 minutes of Byrnes playing solo, with the occasional duet recorded from 1959 up to the early 1980s.  The music is interspersed with tales and memories from Byrnes himself and his London colleagues and a few examples of the music that influenced Máirtín including a 1928 78 rpm record of Fritz Kreisler.

Máirtín is described as having a real Galway style about his playing, and that style is clear in his steady tempo, fine use of cuts and rolls and flattened notes, particularly F and C.  The influence of members of the Aughrim Slopes Ceili band and Ballinakill band can be heard in his choice of tunes in minor and modal keys such as Eileen Curran and the Broken Pledge as well as tunes composed by Tommy Whelan and Paddy Fahey.  The few recordings from 1959 recorded by Ciaran MacMathuna for RTE in Gussie Connor's pub in Doolin are particularly lovely.  The music is played at a slightly slower tempo but with lots of lift.  There are flattened notes and long notes as Byrnes plays with the internal rhythm of the jig Cailleach an Airgid.  The Sean Ryan reel, Dash to Portobello is simply a wonderful tune made to shine by a master craftsman.  Sean 'Ac Donncha's favourite from the same session is the second example of him playing Whelan's jig in the collection.  'Ac Donncha also features as host for some 1962 recordings involving piper Seamus Ennis.  Fiddle and pipes bounce off each other in two selections of reels and Byrnes' dancing feet provide accompaniment to Sean 'Ac Donncha singing Cunla with Ennis playing throughout.

The music of Michael Coleman featured strongly on Máirtín's LP and there are more examples of Coleman tunes in this collection as well as alternative takes and tunes from the session that formed the basis of the LP.  Some of these tracks show the influence of London musicians on his style; his playing is slightly faster, and with some of the wildness of his notes smoothed out.  Selections recorded after his return to Ireland in 1970 show his Galway style remained as strong as ever.  He competed in and won the All Ireland in 1970.  The three tunes he played were recorded and have been included in this collection.  The weaker tracks in the collection were recorded at his friend Diarmaid Fleming's house.  Fleming plays along on accordion and most of the selections are song tunes and waltzes played, we assume, to allow Fleming to join in.  The comments in the sleeve notes highlight that Byrnes had an infectious enthusiasm that could raise the spirits of any company.  These tracks certainly show that enthusiasm to the full.  There are no half measures in his playing of these simple melodies.

The latest selections date from 1984, when Máirtín was interviewed and played some tunes for the RTE programme The Green Groves of Erin.  Again the strong bow hand, tasteful ornamentation and subtle variations are very much a hallmark of Máirtín's playing.  Máirtín died just over 10 years later at Sean 'Ac Donncha's home in Ahascragh, not far from his own homeplace.

As with the previous CDs produced by Lamond Gillespie this has a very comprehensive booklet with biography, photographs and recollections of Máirtín Byrnes as well as notes on the tunes, recording dates and locations.  Considering the range of sources, the tracks flow nicely together and the whole package stands as a fitting tribute to a fine fiddle player.  The CD can be obtained from Lamond's website at https://lamondgillespie.co.uk/2022/04/cd-mairtin-byrnes/ or Custy's shop has a few copies at https://custysmusic.com/collections/latest-releases/products/mairtin-byrnes-h4-the-inimitable-mairtin-byrnes