The Lark on the Strand 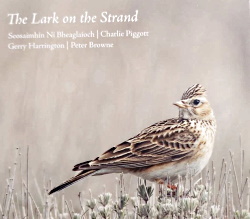 1. The Colliers, Jenny Picking Cockles;  2. Éamonn Magáine;  3. The Wandering Minstrel, The Maid In The Meadow;  4. The Battle Of Aughrim, Boney Crossing The Alps;  5. The Wounded Hussar;  6. The Blackbird, The Stack Of Barley;  7. As I Went Out Upon The Ice, The Ballydesmond polkas;  8. Old Man Dillon, The Lark On The Strand;  9. Amhrán Na Leabhar;  10. Páidín Ó Raifeartaigh, Darby The Driver;  11. Sergeant Early's Dream, Never Was Piping So Gay, Johnny McGreevey's;&nbs12. The Garden Of Daisies;&nbs13. Tom Billy's Favourite, When Pat Came Over The Hill;  14. The Fox On The Prowl, The Holly Bush;  15. Caisleán Uí Néill, Winnie Hayes';  16. The Mountain Lark, The Clogher;  17. The Bonny Blue Eyed Lassie;  18. Máire Rua, Hardiman The Fiddler;  19. Jenny's Wedding, Toss The Feathers.

In 2000 Charlie Piggott and Gerry Harrington released their wonderful CD The New Road.  A few months before the CD launch, they played a dozen concerts around Ireland in the company of singer Josephine Begley (Seosaimhin Ni Bheaglaioch) and uilleann piper Peter Browne.  The concert in Ashbourne Co. Meath was recorded but the recording sat in a loft for over 20 years, until the lock down when it was rediscovered.  On this CD we are now finally able to hear that superb performance by the quartet, spanning 19 tracks lasting nearly 75 minutes.

The opening track of two well known reels sets off at a steady pace but there's a really solid rhythm in the music.  There isn't any accompanist so the main source of backing is Charlie Piggott's left hand on the accordion. Charlie has a lyrical style of playing and his take on the chordal structure of tunes always manages to make them sound moody and interesting.  Peter Browne doesn't use the regulators for the ensemble selections so the box chords sit very nicely over the piper's drones.

This is followed by the first of three songs from Seosamhin Ni Bheaglaoigh, this one unaccompanied and in Irish.  Later she sings Amhran na Leabhar a song of loss from Tomas Rua O'Suilleabhain, the 19th century poet from Kerry.  This song is prefaced by Charlie playing the air then the three musicians variously provide accompaniment to the singer.  Overall it's a very polished rendition and the air itself is a lovely tune.  Towards the end of the CD Seosamhin sings the well known song in English, The Bonnie Blue-eyed Lassie.  It might have helped those without Irish to appreciate the two songs as gaeilge if there was a translation of the words into English.  As it is, we have the short and sometimes cryptic summary in the sleeve notes.

There are a couple of selections from the New Road CD that Charlie and Gerry released in May 2000.  Both these selections can be traced to musicians from North Clare and East Galway where Charlie spent a lot of time living and playing during his De Dannan days and afterwards.  These tunes and the pace they are played at are very reminiscent of the old players from Clare and they fit Charlie's style really well.  Gerry manages to blend his own style with Charlie's and the two players provide a great example of sympathetic duet playing.

Peter Browne, although a Dublin man has a great interest in the music of Sliabh Luachra and he plays one set of polkas and another of slides in duet with Gerry Harrington.  Not many pipers play polkas and slides but Peter does a fine job of fitting them to the pipes.  Gerry reinforces the reference to Julia Clifford and Dennis Murphy's LP The Star above the Garter by dropping down an octave once through the first Ballydesmond polka.  He puts the same trick into the set of hornpipes to great effect.

Each player performs a solo.  Peter Browne plays the slow air The Wounded Hussar collected by Seamus Ennis who was a great influence on Peter's playing.  Using the full range of the sounds provided by the combination of chanter and regulators, this is mighty playing of a great slow air.  Gerry Harrington plays a lovely selection of reels starting with Sergeant Early's dream, a great fiddle player's tune which takes it's name from the Chicago piper who was a source of tunes for Francis O'Neill.  He follows it with a composition of Ed Reavy and another tune associated with a 20th century fiddler from Chicago.  Charlie Piggott plays an air followed by a jig, tunes he learnt from Micho Russell but both with all the characteristics of Charlie's own personal style.  I am particularly fond of the way he plays Winnie Hayes' jig.  Other musicians play this tune a fifth higher, resulting in a rather strident feel to the second part.  Charlie has the perfect setting for this tune.

There is a good mixture of tune types through the concert, including marches, slip jigs and a set dance but the CD ends as it started with a couple of lively reels, one popular in County Clare, the other a Dublin setting of Toss the Feathers.

The sound mix and balance is exceptional throughout, and at times you forget that this is a live recording.  There are a few notes on the tunes and songs in the accompanying booklet as well as short biographies of the four performers.  This recording may have languished in a loft for 20 years but it will be a very welcome addition to the collection of any Irish music follower.  The CD comes highly recommended and is available from Bandcamp at: https://thelarkonthestrand.bandcamp.com/ or from Custy's at: https://custysmusic.com/collections/latest-releases/products/seosaimhin-ni-bheaglaioch-charlie-piggott-gerry-harrington-and-peter-browne-h4-the-lark-on-the-strand