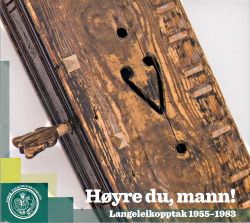 The CD contains a descriptive booklet, partly in English, which includes photographs of instruments and players.  It seems that most of these archive recordings were made specifically for documentation, principally to capture traditional ways of playing before they disappeared altogether.  The fact that most of the players heard in the earlier recordings on the album were in middle or old age at the time (the oldest, Ingeborg Lunde having been born in 1875) is perhaps an indication that the langeleik playing tradition was not being taken up by many from the younger generation.  In recent years there has been a significant revival of interest in Norwegian traditional music, bringing more younger players to the fore.

Langeleiks vary in the number of strings they employ, but the melody is played on just one, as with a mountain dulcimer.  Left-hand fingers fret the string on the fingerboard while the right hand plucks it using a plectrum, simultaneously striking the other strings to provide an underlying drone.  The instrument was traditionally used in the home, which is probably why it was considered acceptable for women to play, at a time when playing the fiddle, for example, was an almost exclusively male prerogative.  Generally played solo and not favoured for social occasions, the langeleik never really developed its own repertoire and many of the tunes played on it were appropriated from other instruments and uses.  So on the CD we hear a wide range of dance tunes as well as wedding marches and other miscellaneous items.  Reinlender - Oddrun Rudi

Norwegian dance music tends to be divided into two types: the very old bygdemusikk with its modal melodies, idiosyncratic structuring and elusive rhythms and the later imported styles such as waltzes, polkas, mazurkas and reinlenders.  Examples of all these can be found here.  One of the most popular forms of bygdemusikk is the springar, in triple-time, but unlike a waltz having an uneven weighting of the three beats, which itself varies from one region to another.  In the central Valdres area, where the langeleik tradition has sustained longer than elsewhere, the springar is characterized by a very short first beat with the accent coming later in the bar.  Gamal springar - Kari K Jevne

Because these recordings were made for posterity and also for the benefit of musicologists who were interested in investigating the tonality of the langeleik, there is a sense of these pieces being presented to inform rather than to entertain.  This does not, however, make them any less enjoyable to listen to.  On the contrary, there is an engaging personal quality here, imparted especially through the vocal introductions which precede many of the performances.  Some of these examples of home-spun music may well have been recorded in the living rooms where they were customarily played and there is an intimacy about the performances which feels entirely fitting.  The langeleik was not an instrument used by jobbing musicians and an air of modesty pervades these recordings.  Before playing a tune which imitates the striking of a church clock the player, a watchmaker who rarely performed on the langeleik in public, introduces it by first stating his name, Bjørn Skøre, then adding "jeg skal prøve å spela St. Tomasklukkelåtten" ("I shall try to play the St Thomas clock tune") which he proceeds to do beautifully.

Høyre du, mann! is a welcome showcase for a stay-at-home instrument which hasn't travelled far afield to seek fame and fortune.  In these days of pandemic lockdown perhaps the thinking was that its time has come.