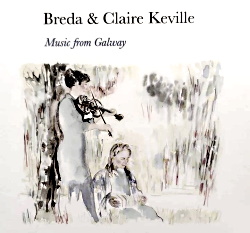 Breda and Claire Keville are both well known and well respected musicians in traditional circles.  Claire was also a presenter on Clare FM's nightly traditional music programme, The West Wind.  Both sisters have released solo CDs and this is their first CD of duets.  Breda's CD The Hop Down showcased a wonderful fiddle player steeped in the style of older players from the area, especially Paddy Fahey, and her choice of tunes reflected the modal music of East Galway.  Elder sister Claire has produced two solo CDs, on The Daisy Field she plays concertina and on Irish Music on harpsichord, unsurprisingly she plays the harpsichord.  A small number of duets by Claire and Breda feature on their solo recordings which served to whet the appetite for more.  This record, then, came with high expectations and it does not disappoint.  It is pure and honest music played with love and respect for the torch bearers of this regional style such as Paddy Kelly, Paddy Fahey, Eddie Moloney and Tommy Whelan.  Galway music is characterised by an easy tempo, subtle but effective ornamentation, and a way of playing that emphasises the interesting and defining elements of the individual tune, and sometimes twisting the tune a little to bring out these elements in a new light.

Played at a comfortable pace with minimal but very sympathetic accompaniment from Terence O'Reilly's guitar the CD starts off with a couple of tunes composed by Ed Reavy.  Thanks to the popularity of his compositions, Ed was one of the best known of the many musicians who emigrated to America in the first half of the twentieth century.  East Galway emigrant Mike Rafferty is remembered as the source of the first tune in the set of jigs on track 2.  The second tune in this set links Eddie Kelly and Paddy Fahey as possible composers or even collaborators.  These first couple of tracks set the scene for the rest of the CD, the emphasis is on the minor key and the interesting twist in the melody.  The tunes have plenty room to breathe and weave their mesmeric magic.  Claire occasionally drops into the lower octave to add richness to the sound or puts in a few punchy chords in imitation of the piper's regulators.  O'Reilly only plays on seven of the 15 tracks so we also get the pleasure of hearing the two players blend their respective instruments with the mutual understanding that only close family members seem to be able to create.

Track 3 introduces the first of four tracks of slow airs.  On three of the selections, Breda plays old airs from Connemara singers past and present as well as The Wounded Hussar collected from Padraig O'Keeffe.  There's a feeling of tremendous age to the achingly beautiful air Maitias Shadhbh Fhilipe, collected in the 1940s in Connemara by Seamus Ennis.  For her solo, Claire plays an air from the Aran islands paired with a couple of ancient marches sourced from Micho Russell.  Pipers seem very happy to include any number of airs on their recordings but not many other musicians offer more than one or two slow items on a CD, so it is very pleasing to find the jigs and reels broken up by these more reflective pieces.  The CD also ends with a Carolan piece played at a stately pace.

Not all the tunes are deeply rooted in the region.  There are examples of compositions by Tipperary box player Paddy O'Brien, Donegal and Clare man, Tommy Peoples, Kenmare fiddle player Gerry Harrington and two jigs written by Claire herself.  The way they are played though, makes you think that the East Galway approach always brings out the best of any tune.

Credit must go to Ronan Browne for the fantastic job he has done in engineering and producing this record.  The trio are always well balanced and the overall production is very clean and provides a lovely clarity to the music.  The pacing and the mix of tracks makes the CD very enjoyable and easy to listen to.  The CD is only 41 minutes long and we were left wanting more.  There are some personal and informative notes on the tunes from the two sisters to round out a great collection.