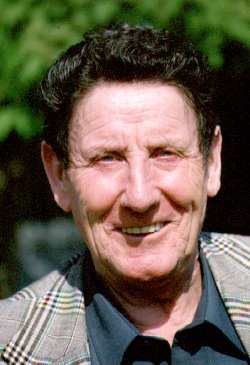 We don't often hear the term 'concept album' used in connection with traditional singers.  It speaks more of earnest youths indulging their ideas of progressive music in records with swirly Vertigo labels and gatefold sleeves.  But here the booklet notes come with a paragraph headed 'The Concept', making this reader at first a little uneasy.  In the event, it turns out that the concept is simply to record the singer with instrumental accompaniment and some additional voices in the choruses.  While the tendency over the past 30 years and more has always been to record traditional singers unaccompanied, as Peter Shepheard rightly suggests in the booklet notes, the context in which traditional songs were sung would at least occasionally have involved some instruments.

Jock Duncan, now 70 years old, was brought up in the country around New Deer and Fyvie in Aberdeenshire, at the very heart of the Bothy Ballad tradition, and grew up listening to the songs, both at first hand and through what was then still the comparatively new medium (for traditional song, anyway) of the 78 rpm record - Willie Kemp and George Morris were probably the first authentic singers of these songs on record.  As Shepheard's notes describe it, Jock's upbringing was rich in music, his mother a piano player, lending accompaniment to local musicians, and his neighbours including the likes of John Strachan, one of the great traditional singers of the time and place.

The result is a superb, rich repertoire encompassing big ballads, The Cruel Mother - a superb version - Harlaw and Glenlogie (sound clip), as well as Bothy Ballads, which category encompasses all of the other tracks.  All are embued with a particular musicality and an unmistakable sense of locality.  His versions may not all be especially distinctive (after all, the influence of records is here) but several are, and there are touches of individuality in them all.  I'm no expert on the texts of Bothy Ballads, so won't risk embarrassment by quoting, but it seems to me that there are some good variants here both in words and tune.

True to the concept, almost every track features some accompaniment, whether a bit of low-key harmony on concertina, fiddle or pipes, or full-blown, folk-group style such as on Gruel, with bouzouki, melodeon, pipes and five voices in the chorus.  Brian McNeill, best known for his work with Battlefield Band, produced the sessions and participates in many of the accompaniments, as does Peter Shepheard and Jock Duncan's son Gordon on cauld wind (i.e bellows-blown) pipes, highland pipes and whistles.

Jock Duncan, quite simply, is a great singer - I'd go so far as to say one of the best singers in this idiom and repertoire that I've heard, although this view could be coloured by the knowledge that he is still actively performing.  I haven't heard him in person, but those who have speak very highly.  The notes say that he has rarely sung with accompaniment

and on Glenlogie you can hear the natural flow of his style as he takes the song unaccompanied.  But having said that, he sounds entirely at ease with the accompanists on the other tracks. (sound clip - Rhynie).  The booklet indicates that additional instrumentation and choruses were recorded later and overdubbed, and it may be that on some tracks at least the vocals were recorded unaccompanied (this isn't stated).

I can imagine (no - I know for sure) that there are some enthusiasts of traditional singing who will regard this exercise with some distaste, but nobody is going to force them to listen to this.  There is no doubt in my mind that a lot more people will buy and listen to, and enjoy, this CD than ever would a record on unaccompanied song, and if that increases the number of people who will hear and appreciate Jock Duncan that in itself is sufficient justification (especially given the majority of stuff that is sold around Scotland masquerading as the authentic sound of the nation's music).  If justification is needed; Jock is evidently comfortable and enjoying the experience, and it may well be that the musically supportive context brought out better in him that would have the sometimes sterile context of the serious folklorist with the hand-held microphone.  Any recording context for traditional song is artificial, after all, and who is to judge which is more so than any other.

There is a 24-page booklet, with full lyric transcriptions, scholarly annotations by Peter Shepheard (supported by detailed references) and some quoted commentary from Jock himself on each song.  This is a very worthwhile project and probably the most accessible recordings of authentic Bothy Balladry since Will Kemp himself (and they all had accompaniments too).