Giuseppe Michele Gala's Taranta Ethnica series is a superb job of work; 21 CDs of traditional music, mostly from the south of Italy and the islands, and mostly recorded in the last ten years.  It is probably be what I would be trying to do if I knew of any English singers or musicians, still performing, who were not already working with John Howson or a few other established record producers.  However, it has to be said that the tradition, while still extant in Gala's area, is well past its heyday, and that some of these CDs - extremely interesting and utterly admirable as they are - can be less-than-overwhelming listening to a non-Italian.

So far, the great exception to this has been the wonderful Sardinian dance music compilation Ballos Sardos Vol 1 (TA015), reviewed in these pages some while ago and available for sale from this site for the past six months or so. 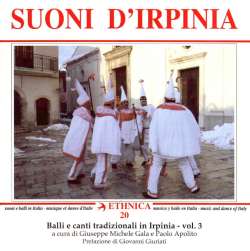 This present offering has to be it's equal in every way - though it deals with songs rather than music - and it, too, is now available here - see Records page.

It, like the Ballos Sardos CD, is slightly out of the ordinary for Taranta releases, in that it includes performances by some younger singers whose interest in the music has been kindled by the revival rather than passed on by family transmission.  Whether this makes their performances more easily accessible to a British listener I don't know.  Certainly, they don't stand out as being 'folky-sounding' in the way they almost certainly would in an English context ... maybe because the traditional performers were all still available to teach and criticise; something a sound recording can never do!  I was entirely unaware of the difference until I read the booklet notes.  All I knew was just how wonderful it all was!

The CD starts with perhaps the best opening track I have ever heard - one male and two female singers, accompanied by two accordions, a clarinet, two tamburelli and several castagnole play a tarantella from Montemarano, recorded just last year.  The instruments begin at a fair old clip, joined by the voices after about one minute, and the whole thing - without greatly accelerating in speed - manages to get more and more and more exciting as the track progresses.  When it comes to an end, after 11Ľ minutes, you are left wishing they'd managed another five minutes or so!  You may imagine that a half-minute sound clip would be quite inappropriate.  As the booklet says, this tarantella from the mountains is a far cry from the 'dubious versions of 'Neapolitan' tarantellas which became popular in the cities among the educated classes in the 19th century'.  It should be pointed out that Irpinia is the mountainous area to the east of Napoli in the Campagnia regione.

The second track finds the same two women joined by a third for A legna alla muntagna (In the Woods on the Mountain), a beautiful slow serenata which, stylistically,

sounds as if it would be completely at home amongst the Rice Girls of the Padana plain in the North. (sound clip)  Next, we move to Paternopoli with a Calascionata and another tarantella from a male singer and tamburella player accompanied by a single organetto (melodeon).  These are superb (sound clip Calascionata) - and the singer sounds so much like Enrico Frongia, the Sardinian singer with Ritmia.  In fact, much of the singing on this brilliant CD could, to my ears, easily come from other parts of Italy entirely, and is quite unlike many of the other Taranta southern recordings mentioned above - or, indeed, much of the music recorded by Lomax and Carpitella here in the fifties.  In addition to the two towns already mentioned, there are also recordings from Volturara, Castelvetere, Cassano Irpino, Montella and Nusco to be found amongst the 19 tracks.

This is not really the place for a track by track description but, take my word for it, every single one is splendidly performed, exciting, interesting ... and great listening. As a final treat, try this ballad from Castelvetere (sound clipMariuccia ('Na pippa e 'na cannuccia)).  Buy it today - from MT!