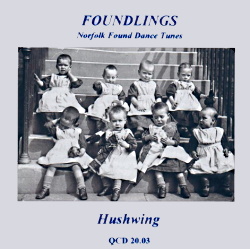 Two very different products of the Revival dropped through my letter-box within the past four days.  One lasts for 37 minutes, the other for 77.  One offers twice the music for the same price.  Do you want the good news or the bad news?  Well, given the dire state of society at present, let's start with the good.

Hushwing are a seven-piece band from Norfolk, who have made a record of 36 tunes from Norfolk that have been found hidden in various corners of the published media, and seem never to have escaped into the wider world.  A secondary purpose of the CD is to pay homage to that bedrock of the English dance music genre, Record No.1 English Country Dance Music - or, rather, to the musical style found thereon.  Or, more particularly, to the group of traditional musicians that Reg Hall and Mervyn Plunkett gathered together in Walter Bulwer's house in 1962.  Reg wrote that they played all day, and then selected those performances with 'the best starts and finishes, and the fewest mistakes'.

Hushwing have followed the same principles here.  That's not to imply any criticism to their work - quite the reverse, in fact - there are no highly polished, perfect performances here, just 21 tunes or sets of tunes sounding as if they're played for enjoyment, on two fiddles, mandolin, melodeon, dulcimer, banjo, whistle and piano.

The other 'purpose' of this CD is to make available 36 tunes, or versions of tunes, you will probably never have heard before - and who would want to forgo that pleasure?  (My last band, Phoenix, tried to do the same thing with a couple of CDs).  Anyway, let's have a listen to a couple of tracks you may not know: here's Moneymusk/Harry Cox's Jig and how about Walter Bulwer's Polkas 4 & 3.  Nice, eh?  Not necessarily the best tracks, but ones I like.  Danny just came in, and said "Sounds like the real thing.  Lovely". 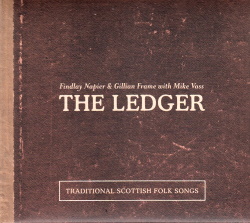 The sound quality, singing and playing are all of high quality - but as to the 'communication' ... there is rarely any indication in the singing that he or she actually feels anything for the words, or the story, of the song.  This might be a result of Norman Buchan's warning, reproduced in the CD's booklet, that 'Good folk songs are ruined by an attempt at over-interpetation - leading to false dramatics'.  I wonder if he would have included Jock Duncan's stylistic performances in this criticism?  Whatever, there's no attempt at interpretation of any sort here - every song is accompanied, and in strict tempo - making a lovely noise seems to be all that the three performers are interested in.